The major histocompatibility complex (MHC) is comprised of cell membrane proteins that deliver short peptides to the cell surface, presenting these peptide antigens to circulating immune surveillance cells. These peptides are mostly self-peptides however during times of infection these can also be antigens from pathogens that, upon recognition and subsequent binding by the immune cells, specifically T cells, result in the generation of an immune response.

The MHC-peptide complex on the cell membrane interacts with the T cell receptor (TCR) with the MHC binding to the TCR and its CD3/CD4 or CD8 co-receptors, while the antigenic epitope is bound by the variable Ig-like domain of the TCR. These interactions stimulate T cell activation. Read our mini-reviews for more detailed information on the TCR and CD3, the major T cell co-receptor.

The MHC gene expresses three types of molecule. The class III molecules are not involved in antigen presentation; instead they play a role in inflammation. These molecules include complement components such as C2 and C4, tumor necrosis factor - α and heat shock proteins. There are two main types of MHC that present antigens; MHC class I and MHC class II.

Due to the requirement of MHC interactions with TCR and its co-receptors in the appropriate activation of T cells, they also play a critical role in thymic T cell selection.  The first stage in thymic T cell selection, positive selection, requires the T cells to bind to MHC Class I or MHC Class II molecules with an appropriate affinity to initiate the stimulation of “survival signals” within the T cell.  The second stage of T cell selection, negative selection, removes auto-reactive T cells and, therefore prevents autoimmunity.  During negative selection the majority of T cells that bind too strongly to self-antigens receive apoptotic signals which result in cell death. T cells with low affinity for self survive to become effector T cells, while those with an intermediate affinity for self may go on to become regulatory T cells.  Only 2% of the thymocytes populating the thymus reach maturity and exit the thymus to circulate as immature T cells.  In the periphery when self-antigen is presented to T cells, T cell activation should not take place.   Autoimmune disease occurs when control of auto-recognition fails, and results in T cells being unable to tolerate self.

In humans the MHC is also known as human leukocyte antigen (HLA) complex and in the mouse it is known as the H-2 complex.

Location: Present in all nucleated cells.  Initially present in the endoplasmic reticulum, for peptide loading, the MHC I molecules are externalized via the Golgi apparatus and secretory vesicles which fuse with the cell membrane.

Peptides: Mostly intracellular, generated by proteasomal (26S, thymic-specific and immuno proteasomes) degradation of proteins which are subsequently transferred to the MHC complex by transporter associated with antigen processing (TAP) molecules.  The presentation of intracellular peptides means that this class of MHC molecule is critical in facilitating an immune response to intracellular pathogens, such as viruses.

In humans: The HLA is comprised of three molecules; HLA-A, HLA-B and HLA-C.

Location: Usually only on professional antigen presenting cells (APCs): macrophages, B cells, dendritic cells (DCs). Initially present in the endoplasmic reticulum, where the MHC II complex is stabilized by the invariant chain, which also prevents it binding cellular peptides. The MHC II is then externalized via the Golgi apparatus, where the invariant chain is partially degraded to a peptide which is held in the binding groove. This invariant chain peptide is exchanged for a foreign antigen before presentation at the cell surface; involving the chaperone HLA-DM in the majority of APC, while B cells specifically require HLA-DO.

Structure: Two chains; α and β chains; both having two domains (with the α2 and β2 domains being transmembrane and the α1 and β1 domains forming the peptide binding groove).

Peptides: Mostly extracellular, generated by endocytic pathway protein degradation. The peptide is taken up by the APCs; process of phagocytosis into phagosomes by macrophages and DCs, and by endocytosis into endosomes by B cells. After antigen processing an epitope is presented in complex with MHC II on the cell surface.  This mechanism therefore facilitates the generation of an immune response to external pathogens, such as fungi and bacteria.

Result of T cell binding: Depending upon the macro environment, which includes co-stimulation molecule expression and cytokines secretion by the APCs, the helper T cell is stimulated into either a memory T cell or effector T cells.  The effector T cell can be: T helper (Th) type 1, Th type 2, Th type 17 or regulatory T cell.

In humans: The HLA is comprised of six isotypes: HLA-DPA1, HLA-DPB1, HLA-DQA1, HLA-DQB1, HLA-DRA and HLA-DRB1.

The genes for the HLAs are highly polymorphic, with each individual having their own specific HLA allele set. This gives rise to a diversity of antigen presentation, thereby having differing susceptibility to infection and auto immunity.

In addition to the alleles known to make up MHC I and MHC II, there are a number which are considered pseudogene molecules or their role is not yet known. As there are many different alleles this results in a numbering system such as HLA-B27.  Table 1 shows a number of the different markers available to detect the various molecules of the HLA.

There are three major MHC class I proteins encoded by the HLA which are HLA A, HLA B and HLA C. These proteins are found on the surface of almost all nucleated cells. Mouse Anti-Human HLA ABC Antibody, clone W6/32, recognizes an antigenic determinant shared among products of the HLA A, B and C loci. Clone W6/32 recognizes a conformational epitope, reacting with HLA class I α3 and α2 domains. This human HLA ABC specific antibody has been used in conjunction with the B cell marker, CD19, in flow cytometry (Figure 1), to show, as you would expect, MHC Class I expression in all B cells. 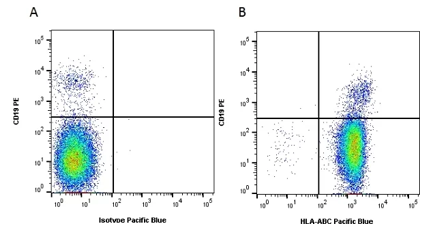 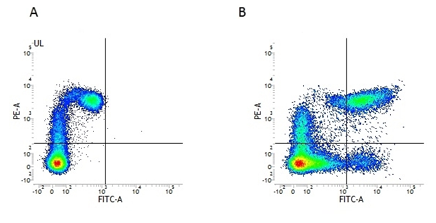 The H-2 complex genes encode for proteins of the mouse MHC. There are three main classes of H-2 genes, class I (H2-K, H2-D, Q, H2-T18), class II (H2-I) and class III (H2-S). The H-2 genes are highly polymorphic and involved in many processes in addition to antigen presentation such as complement components and immune response. Table 2 shows a number of the different markers available to detect the different molecules of H-2. 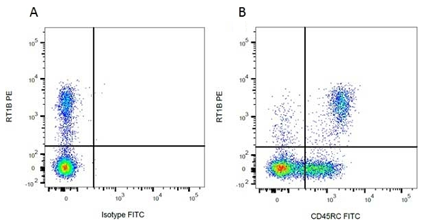