Cluster of differentiation 3 (CD3) is a multimeric protein complex, known historically as the T3 complex, and is composed of four distinct polypeptide chains; epsilon (ε), gamma (γ), delta (δ) and zeta (ζ), that assemble and function as three pairs of dimers (εγ, εδ, ζζ). The CD3 complex serves as a T cell co-receptor that associates noncovalently with the T cell receptor (TCR) (Smith-Garvin et al. 2009). The CD3 protein complex is a defining feature of the T cell lineage, therefore anti-CD3 antibodies can be used effectively as T cell markers (Chetty and Gatter 1994).

TCRs cannot bind free epitopes/antigen; instead TCRs bind enzymatically cleaved fragments of larger polypeptides associated with major histocompatibility complexes (MHC), which is synonymous with the human leukocyte antigen (HLA) system in humans (Rudd 1990, Gao et al. 2002). This interaction occurs in a space that has become known as the immunological synapse. MHC class I molecules are expressed on all nucleated cells of the body and present antigens to CD8, a transmembrane glycoprotein expressed predominately on cytotoxic T cells. This activation of cytotoxic T cells subsequently results in the destruction of virally infected cells. MHC class II are found on macrophages, B cells and dendritic cells.

These immune cells present antigens to helper T cells with CD4 stabilizing the MHC/TCR interaction, which ultimately results in an antibody mediated immune response. Other co-stimulatory molecules, such as CD45, CD28 and CD2 aid in T cell activation in the immunological synapse and initiate the formation of the TCR signalosome, a macromolecular protein complex responsible for intracellular signaling. Read our TCR mini-review for detailed information on TCR activation, signaling, development and diversity.

TCRs are heterodimers composed of either an alpha and beta polypeptide chain, occurring in approximately 95% of the TCR population, or a gamma and delta polypeptide chain (Pitcher and van Oers 2003, Malissen 2008). Each polypeptide contains a constant (C) and variable (V) region (Figure 1). The constant region is anchored in the cell membrane, while the variable region extends extracellularly and is responsible for antigen binding. The short cytoplasmic tail of the TCR lacks the ability to signal, requiring intracellular signaling to be initiated by the CD3 protein complex.

CD3 proteins have an N-terminal extracellular region, a transmembrane domain and a cytoplasmic tail where the immunoreceptor tyrosine activation motifs (ITAMs) are located. The extracellular domains of CD3 ε, γ and δ contain an immunoglobulin-like domain, so are therefore considered part of the immunoglobulin superfamily. 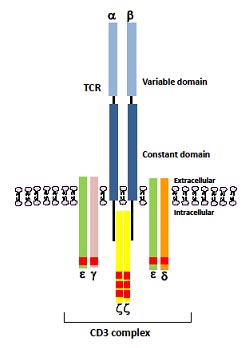 Fig. 1. A schematic representation of a TCR heterodimer comprising of an alpha (α) and beta (β) polypeptide chain with each polypeptide containing a constant and a variable region. The CD3 protein is composed of three pairs of dimers (εγ, εδ, ζζ) that are responsible for intracellular signaling, initiated by the phosphorylation of immunoreceptor tyrosine activation motifs (ITAMs) shown as red rectangular domains (ten in total).

CD3 ε is a non-glycosylated polypeptide chain of 20 kDa. The existence of an epitope on the ε polypeptide that is conserved among many species has made it possible to obtain the antibody clone, CD3-12 which has a very broad species cross-reactivity for the CD3 marker (Jones et al. 1993). Both CD3 γ and CD3 δ are glycosylated and have a molecular weight of 25-28 kDa and 20 kDa respectively (Norman 1995).

CD3 ζ (also known as CD247) is a non-glycosylated polypeptide with a molecular weight of 17 kDa that shares no sequence similarity with the other CD3 polypeptide chains. CD3 ζ was first discovered by virtue of the fact that it coprecipitates with the TCR complex. CD3 ζ maps to human chromosome 1 band q22-q25 underscoring the fact that CD3 ζ is a distinct genetic component of the CD3 protein complex (Weissman et al. 1988).

CD3 eta (η) is an alternatively spliced product of the gene that encodes CD3 ζ (Clayton et al. 1991) and has an apparent molecular weight of 23 kDa (Orloff et al. 1989). CD3 ζ is predominantly found as a homodimer, but a fraction (approximately 10%) of CD3 ζ is found complexed as a heterodimer with CD3 η and in this form is thought to confer different signaling properties (Orloff et al. 1989).

CD3 omega (Ω) is a non-glycosylated polypeptide chain of 28 kDa that associates with the TCR complex during TCR assembly in the endoplasmic reticulum, but does not associate with the TCR complex at the cell surface (Pettey et al. 1987, Clevers et al. 1988, Neisig et al. 1993). It is thought that CD3 Ω might facilitate complex assembly and/or be involved in the retention of unassembled CD3 protein complexes in the endoplasmic reticulum leading to their subsequent degradation in the lysosomes.

ITAMs are required for initiation of the signaling cascade as they recruit protein tyrosine kinases, signaling intermediates and adapter molecules. Other immune receptors, such as FcR and BCR, contain far fewer ITAMs than the TCR: CD3 complex, however, T cell development and activation is influenced by the number, location and type of ITAMs present within the complex (Guy and Vignali 2009). This suggests that the TCR is able to vary its signaling leading to diverse T cell responses.

Following antigen stimulation conformational changes within the cytoplasmic tails of the CD3 polypeptides occur. This is induced by protein tyrosine kinases (PTKs) that trigger the MHC/TCR interaction. These PTKs belong to the Src family, such as Lck and Fyn, and phosphorylate conserved tyrosine residues present within the ITAMs in the CD3 complex, creating a docking site for proteins with Src homology 2 domains, e.g. ζ -associated protein of 70 kDa (ZAP-70 ) (Pitcher and van Oers 2003, Smith-Garvin et al. 2009).

Recruitment of ZAP-70, a syk kinase family member, binds to CD3-ζ. Bound ZAP-70 phosphorylates the transmembrane adapter protein linker of activated T cells (LAT) which then allows the cytosolic adapter protein SH2 domain containing leukocyte phosphoprotein of 76 kDa (SLP-76) to bind to it. These adaptors form the backbone of the signalosome complex that nucleates the subsequent activation of downstream effector molecules necessary for T cell activation.

The formation of this signaling complex results in the activation of PLC gamma 1-dependent signaling pathways including calcium and diacylglycerol (DAG) induced responses, cytoskeletal rearrangements and integrin activation pathways that mediate cell to cell and cell to matrix interactions. The ligation of co-stimulatory molecules, such as CD28, enhances the activity of these pathways, while hematopoietic progenitor kinase-1 (HPK1), which associates with SLP-76, acts as a negative regulator of T cell activation.

The specificity of the CD3 antigen for T cells and its appearance at all stages of T cell development makes it an ideal T cell marker for both the detection of normal T cells and T cell neoplasms (lymphomas and leukemias), and makes it a useful immunohistochemical marker for T cells in tissue sections (Salvadori et al. 1994, Vernau and Moore 1999).

CD3 is also weakly expressed by some macrophages, Purkinje cells in the brain and by Hodgkin’s and Reed-Sternberg cells, both of which are cells found in Hodgkin’s lymphoma usually derived from cells of the B cell lineage.

As mentioned above, the CD3 protein complex is an important T cell marker for the classification of malignant lymphomas and leukemias (T cell neoplasms). CD3 can also be used for the identification of T cells in coeliac disease (Leon et al. 2011), lymphocytic colitis and collagenous colitis (Mosnier et al. 1996, Sapp et al. 2002).

Animal studies have shown that anti-CD3 antibodies induce tolerance to allografts (Nicolls et al. 1993). OKT3, an anti-CD& antibody directed against CD3 ε, has been clinically approved for use in humans for the induction of immunosuppression in solid organ transplantation for the prevention and treatment of rejection (Norman 1995). Interestingly, susceptibility to type I diabetes has been associated with the CD3 ε genetic locus (Wong et al. 1991) and anti-CD3 antibodies have been shown to ameliorate the symptoms of this and other auto-immune disorders (Sprangers et al. 2011).