The good, the bad and the ugly side of the gut microbiome

The mucosal surface is the physical barrier which provides protection against infection for the gastrointestinal, upper respiratory, ocular and genitourinary tracts. It is the inner most layer of the GI tract.

The intestinal mucosal surface protects against pathogenic infiltration as it is in direct contact with a vast number of commensal microorganisms, collectively called the microbiota, and pathogenic organisms.

The commensal gut microbiota has been the subject of intensive study to characterize the microorganisms and to assess their role in human health and disease. It has been discovered that these organisms help prevent pathogenic infections by providing competition for surface adherence and nutrients, secretion of anti-microbial peptides and the acidification of the surface. Furthermore, cross talk between the microbiota and the immune response in the maintenance of the mucosal homeostasis has been demonstrated.

Bio-Rad provides a large selection of antigens, antibodies and recombinant proteins for the study of commensal and pathogenic microorganisms. Please search microbiology or infectious disease for further information.

The microbiome has been linked to many clinical conditions such as obesity and cancer. In cancer, negative clinical outcomes could be due to the direct effect of oncogenic bacteria, or in the activation of inflammation by the disruption of mucus layers, leading to tumor formation. Significant positive outcomes have been observed during cancer treatment where certain gut bacteria have seemingly boosted the immune response.

For example, immune checkpoint therapy appears to be enhanced by the microbiota. Clinical trials utilising fecal transplantation or the introduction of specific gut species are ongoing to establish the impact of the gut microbiota, but the exact mechanism remains unclear. For further information on the role played by the microbiota in immunotherapy, read our blog “The good, the bad and the ugly side of the gut microbiome”.

There is a diverse network of immune cells resident at the mucosal surface, which along with specific structures of the surface itself, coupled with the microbiome, maintain homeostasis.  In simple terms the underlying immune cells prevent the uptake of antigens/pathogens while also moderating the response to the pathogen, by stimulating or inhibiting an inflammatory response. 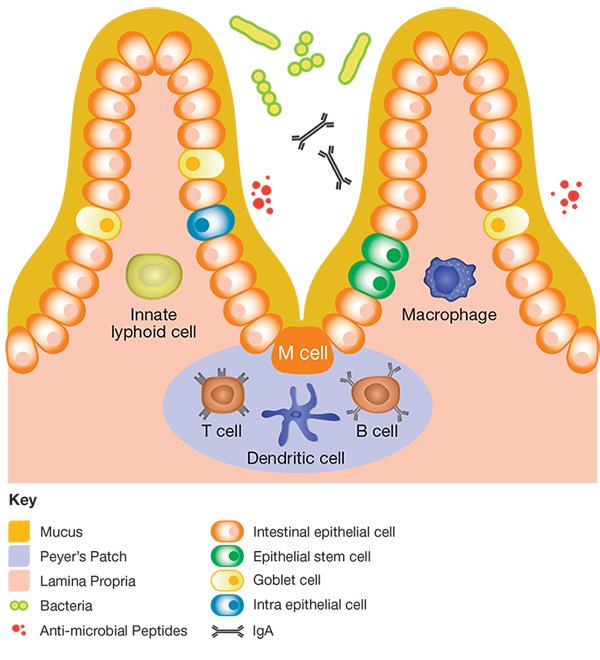 M cells having short microvilli are able to sample the antigen in the lumen owing to the close proximity and large surface area exposed to these antigens.  Once internalized, these antigens are transported to antigen presenting cells (APCs) which can in turn present to T cells. It is thought that this sampling process is also required for the induction of IgA.

Dendritic cells (DCs) sample the lumen for antigens via their dendrites extending through the mucosal epithelial surface.

Epithelia cells are involved in immune surveillance and direction of host response, via:

Intraepithelial lymphocytes (IELs) residing between epithelial cells bind to E-cadherin on the epithelial cells via CD103. Once activated, IELs express effector cytokines such as IFN-γ and TNF-α, which have been associated with inflammatory bowel disease. IELs also protect the epithelia cells by the release of keratinocyte growth factor.

Peyer’s patches located in the villus beneath M cells provide a zone of T cells, germinal centres and DC’s. Here B cells have been shown to produce IgA owing to constant antigen sampling.

Once activated T cells express different markers such as CD69 and CD25 and secrete interleukin (IL) -4 and IFN-γ. The action of these T cells can be diverse; from inhibiting further T cell proliferation and cytokine production to the development of intestinal inflammation.

DCs, like T cells, have a role in either directing or inhibiting inflammation. There are two main classes of DCs in the lamina propria:

Innate lymphoid cells (ILC) have been recently identified in the lamina propria. Lamina propria resident ILCs are thought to be involved in the tolerance to commensal microbiota, immunity to infection and also in inflammation and disease. There are three ILC subgroups which play different roles:

Bio-Rad provides a large selection of antibodies for the study of mucosal immunity including markers of the immune and epithelial cells, cytokines and regulation. In the table below is a selection of key markers in gut mucosal immunology per cell type. To discover the antibodies available to these markers, simply click on the marker. Search for your mucosal immunity antibody of choice by using the search box at the top of the page.

Detailed information on mucosal immunology, including the function and location of the cells listed in the table below can be found in the “Mucosal immune response in health and disease” mini-review.

Cells and markers of the intestinal mucosal immune system