Can Medicine Trust Your Gut Organoids?

​Organoids are collections of cells that self-organize to form organ-like structures. The term organoid has been around for decades; however scientific advances in recent years have clearly defined this concept enabling robust generation of organoid systems. The implications of this technology, from studying developmental biology to patient transplants and personalized medicine, mean that organoids were named Nature Methods ‘Method of the Year 2017’. Organoid models have been grown for a number of different organs such as brain, breast, liver, kidney and retina, as well as gastrointestinal tract. The focus of this blog is on gastrointestinal organoids and their role in advancing cancer research and therapy.

The intestinal epithelium is composed of crypt and villi structures. In the adult intestine, the base of the crypts contains multipotent stem cells that can differentiate into the different cells of the intestine for renewal and repair (Merker et al. 2016).  An approach to culturing intestinal organoids is to plate whole crypts, although one of these populations of stem cells - crypt based columnar (CBC) cells- has the ability to regenerate an entire crypt-villus axis. CBC cells can be identified through their expression of the marker Lgr5, allowing Lgr5+ cells to be isolated and grown into intestinal organoids (Figure 1) from both mouse and human cells (Sato et al. 2009, Spence et al. 2011).

Fig. 1.  Culturing intestinal organoids.  Lgr5+ cells can be isolated and cultured in Matrigel with a cocktail of factors to promote organoid formation.

CBC stem cell activity is maintained by communication with the surrounding Paneth and stromal cells (Merker et al. 2016). Signaling pathways shown to be important for establishment of the intestine include: Wnt, BMP/TGF-β, Notch and EGF, however to successfully grow intestinal organoids, it is necessary to supplement the Matrigel culture medium with factors to support these signaling pathways (Sato et al. 2009, Sato et al. 2011a). As Lgr5+ CBC cells cannot produce their own Wnt, this includes addition of Wnt3A until the Paneth cells are established. Addition of R-spondin1 also augments Wnt signaling and promotes organoid formation. Noggin is included in the culture medium to promote cellular proliferation via the BMP/TGF-β pathway and inclusion of EGF activates the EGF pathway for crypt growth and long-term expansion of organoid cultures (Sato et al. 2009, Sato et al. 2011a).

Once established, CD24+ Paneth cells can support CBC cells and express essential signals for stem cell maintenance including the Notch ligand Dll4, EGF, TGF-α and Wnt3 (Sato et al. 2011b). For long-term growth and expansion of intestinal organoids, cell death can be inhibited by adding inhibitors of Rho-associated protein kinase (ROCK), like Y-27632, inhibitors of activin receptor-like kinase (ALK)1 and inhibitors of p38 (Sato et al. 2011, Jung et al. 2011). Addition of nicotinamide also helps long-term culturing due to its role in the synthesis of coenzymes NAD+ and NADP+ (Sato et al. 2011a). 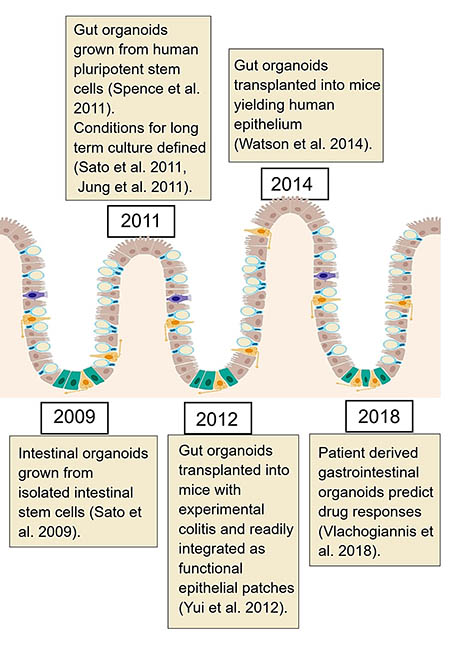 Transplanting cultured gastrointestinal organoids into mice has demonstrated that they are functional and can retain their self-renewal and multi-lineage differentiation properties even after transplantation (Yui et al. 2012, Watson et al. 2014). This technology shows the potential implications for regenerative biology as cultured organoids could be used to repair damaged gastrointestinal tract.

Growing organoids in the laboratory enables scientists to model cancer and study signaling pathways and mutations important for disease progression. The ability to culture organoids from gastrointestinal biopsies allows treatments to be tested, with the hope of identifying new therapeutic compounds (Merker et al. 2016). Very recently, a paper from Vlachogiannis et al. (2018) demonstrated for the first time that biopsies taken from gastrointestinal cancer patients can be grown into organoids that accurately predict clinical outcomes for each individual patient. This could revolutionize personalized medicine and accelerate the drug-development process for new treatments.

The authors used 110 biopsies from 71 patients with metastatic gastrointestinal cancers who were enrolled in Phase 1 or 2 clinical trials, to grow organoids. They compared genetic mutations and protein markers in the patient-derived organoids with their parental biopsies and  found a 96% overlap between mutational spectra (Vlachogiannis et al. 2018). The team was able to evaluate the clinical predictive value of these patient-derived organoids and found that if a drug was not effective in the organoid model, it would not work for that patient. Excitingly 88% of the time however, when  the drug worked in the organoid, the patient responded to treatment (Vlachogiannis et al. 2018).

While the results from intestinal organoid studies are promising, there are still some limitations of the technology to be overcome in order to fully reach its potential. Notably, organoids lack some components of the living digestive track, including the blood system, enteric nervous system and cells of the immune system. Although the intestinal organoid structures are representative of the crypt-villus structures, they are not a perfect match and show variability in size and shape between different organoid cultures. This impairs their use in phenotype screens as the structures need to be more reproducible between organoids to observe accurate results. Furthermore, the extracellular culture matrix (Matrigel) is relatively rigid and may limit the ability of drugs to penetrate it, thereby hampering high-throughput drug screening (Fatehullah et al. 2016).

Even so, organoids have the potential to significantly advance cancer research and it will be interesting to see what the future holds for this technology. 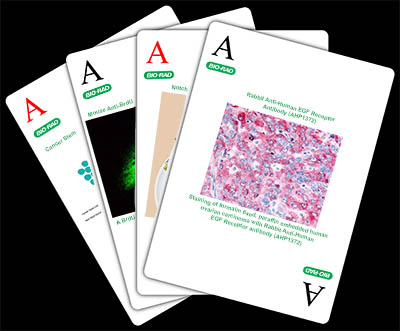 Keep up-to-date with the latest developments in cancer research with our resources: find current protocols, articles and educational resources to help take your research further.