Monocytes are leukocytes that play key roles in inflammation, pathogen challenge and homeostasis. They originate from progenitors in the bone marrow and travel through the blood stream to peripheral tissues. At the site of infection or injury in tissues, they can differentiate into dendritic cells or macrophages that mediate both innate and adaptive immune responses to disease. Monocytes demonstrate extensive plasticity and heterogeneity, and adjust their functional phenotype in response to immunological cues. They are critical cells in the maintenance of human health and have been the focus of intensive research since the 1880s when their phagocytic ability was first described by Ilya Metchnikoff. In this review, we characterize the main human and mouse monocyte subsets and their function, describe the process of monocyte recruitment and differentiation as well as highlight the role of monocytes in disease.

Monocytes are an evolutionarily conserved subset of white blood cells that originate from myeloid progenitors in the bone marrow. They represent 4% of the white blood cells in mice, and 10% in humans (van Furth R and Sluiter W 1986), with a considerable number of monocytes in the spleen and lungs that can mobilize to other tissues (Swirski FK et al. 2009). Monocytes are rapidly recruited to tissues during infection and inflammation, where they differentiate into macrophages or dendritic cells (DC). Their phagocytic ability was first demonstrated by Ilya Metchnikoff in the 1880s, and since then they have been shown to be indispensable in the immunological defense against pathogens (Karlmark KR et al. 2012, Nathan CF 2008). They also play a key role in the maintenance of homeostasis. However, while monocytes are necessary for eliminating invading bacteria, virus, fungi and protozoans, they can also have negative effects on the pathogenesis of inflammatory and degenerative diseases. Accordingly, they are considered key therapeutic targets for disease treatment.

Monocytes are members of the mononuclear phagocyte system (MPS), which is a comprehensive classification of all highly phagocytic mononuclear cells and their precursors (van Furth R and Cohn ZA 1968, van Furth R et al. 1972). It comprises all myeloid immune cells other than polymorphonuclear granulocytes. However, the origin and lineage of the cells in the MPS remained poorly understood until the availability of multi-color fluorescence activated cell sorting, which allowed identification of progenitors and differentiated cell populations based on the expression of specific cellular markers (Geissmann F et al. 2010).

Another bone marrow precursor called the common monocyte progenitor (cMoP) was recently identified (Hettinger J et al. 2013). It was shown that cMoPs give rise to monocytes and their derivatives, but do not generate plasmacytoid DC or cDC. Phenotypically, cMoPs differ from MDPs in that they do not express CD135 (Hettinger J et al. 2013). Figure 1 demonstrates monocyte differentiation in mice.

Development of monocytes occurs during embryonic and adult hematopoiesis as well as under inflammatory conditions (Robbins CS et al. 2012, Ginhoux F and Jung S 2014). Following development in the bone marrow, monocytes enter the peripheral blood stream, and around three days later, migrate to peripheral tissues, as a consequence of homeostasis and inflammation (Stefater JA et al. 2011). In tissues, monocytes differentiate into a range of macrophages or DC upon exposure to local growth factors such as pro-inflammatory cytokines and microbial compounds (Tacke F and Randolph GJ 2006). 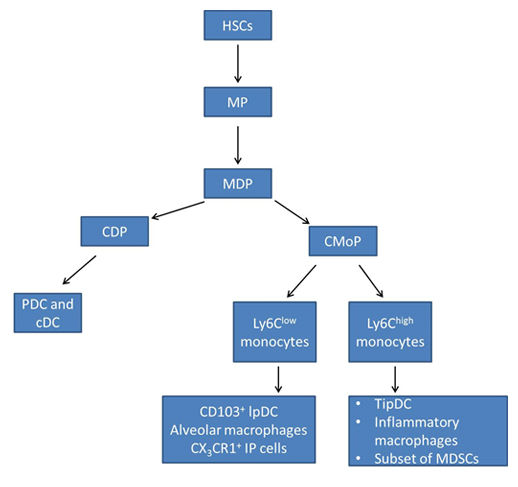 3. Characterization of monocyte subsets in human and mouse

Human peripheral blood monocytes are defined by their expression of the cell surface markers CD14 (LPS co-receptor), CD16 (Fc gamma RIII), CD64 (Fc gamma RI) and the chemokine receptors CD192 (also known as CCR2) (a key mediator of monocyte migration) and CX3CR1 (fractalkine receptor) (Shi C and Pamer EG 2011). There are three different subsets of human monocytes: classical, intermediate and non-classical (Table 1). These subpopulations can be further characterized by different levels of human leukocyte antigen - antigen D related (HLA-DR) (highest level on the intermediate population) and CD195 (also known as CCR5), as well as the receptors TNFR1 (CD120a) and TNFR2 (CD120b). TNFR1 expression is higher on intermediate monocytes, followed by classical and then non-classical monocytes. In contrast, TNFR2 is expressed higher on non-classical monocytes, followed by intermediate, with the lowest expression on the classical subpopulation (Hijdra D et al. 2012).

Additional markers such as the well characterized macrophage marker F4/80 are also expressed at low levels on monocytes (Francke A et al. 2011).

Monocytes are central cells in the immune system that have key roles in maintaining overall health and responding to pathogenic infection. They primarily function as mediators of inflammation however; they also serve as a source of macrophages and DC in circulation and in tissues. They demonstrate high phagocytic capability for removing infected and dying cells, and play a role in adaptive immunity either by directly activating T cells or differentiating into macrophages and DC that are capable of inducing CD8+ T cell proliferation and regulating the activation of CD4+ T cells (Geissmann et al. 2003).

During infection, monocytes are recruited from the bone marrow to infectious or inflammatory sites where they initiate antimicrobial activity or promote adaptive T cell responses (Serbina NV et al. 2008, Shi C and Pamer EG 2011). Monocytes can also be recruited to tumor sites where they can mediate anti-tumor defense mechanisms (Peranzoni E et al. 2010). Therefore, the ability of monocytes to traffic to tissue sites is central to their functions in immune defense. Monocyte recruitment and trafficking is primarily mediated by the interaction of chemokine receptors and adhesion molecules, expressed on the cell surface of monocytes, with their corresponding binding partners. Below we highlight the chemokine receptors and adhesion molecules involved in this process split between the recruitment of classical versus non-classical monocytes. The findings discussed primarily relate to mouse monocytes, as monocyte recruitment is primarily studied in mice. However, the similarities between mouse and human monocyte subsets indicate a conserved system and the studies conducted in mice are useful for understanding human monocyte biology (Geissmann F et al. 2003).

Chemokine receptors and chemokines involved in the recruitment of classical monocytes

The majority of circulating monocytes belong to the classical subset, and they selectively traffic to sites of inflammation (Geissmann F et al. 2003). CC-chemokine ligand 2 (CCL2; also known as MCP1) and CCL7 (also known as MCP3) bind to CD192 to facilitate the emigration of Ly6Chi monocytes (Tsou CL et al. 2007) from the bone marrow to tissues. Deletion of either Ccl2 or Ccl7 in mice results in a 40-50% decrease in monocyte recruitment during infection, indicating that they are necessary for monocyte trafficking during pathogen challenge (Jia T et al. 2008). The exact mechanism of CCL2 and CCL7 mediated monocyte recruitment is unclear; however, it has been proposed that IL-23 expression is needed for CCL2 and CCL7 mediated recruitment of inflammatory monocytes to the spleen during bacterial infection (Indramohan M et al. 2012).

Monocytes also express CD191 (also known as CCR1) and CD195, which bind to a number of chemokines including CCL3 and CCL5 (Mack M et al. 2001, Kaufmann A et al. 2001). In vivo depletion of CD195 and CD191 demonstrates that these chemokine receptors have non-redundant roles in recruitment of inflammatory monocytes (Eis V et al. 2004, Braunersreuther V et al. 2007).  Recruitment of Ly6Chi monocytes to atherosclerotic plaques in a mouse model of atherosclerosis was shown to be mediated in part by CD195 as well as CD192 and CX3CR1 (Tacke F et al. 2007). Determining the role of CD191 and CD195 in monocyte recruitment is however complicated by the fact that unlike CD192, these chemokine receptors are expressed on a wide range of cells (Shi C and Pamer EG 2011). Therefore, it is possible that alterations in monocyte recruitment observed in CD191- and CD195-deficient mice could be a consequence of effects on other cell populations that express these receptors (Shi C and Pamer EG 2011).

Table 2 summarizes the adhesion molecules and chemokine receptors involved in monocyte recruitment as well as their corresponding binding partners.

Monocytes play critical roles in the maintenance of health. Consequently, the increased production or absence of monocytes results in disease. Monocytosis is defined as an increase in absolute blood monocyte count to more than 800/µL. The increase in the proliferative activity of monocytes in the bone marrow, in response to inflammation, leading to monocytosis, was first reported in the 1970s (Meuret G et al. 1974). It is now known that monocytosis is an indicator of various inflammatory diseases such as autoimmune disease, gastrointestinal disorders, sarcoidosis, and viral and bacterial infections. It also occurs in patients with cancer and chronic conditions such as tuberculosis (Dutta P and Nahrendorf M, 2014). Monocytopenia on the other hand is the deficiency or absence of monocytes in blood circulation. Monocytopenia and mycobacterial infection (MonoMAC) syndrome is characterized by a combined absence of circulating monocytes, DC, B cells and natural killer cells (Vinh DC et al. 2010). This syndrome occurs in patients with mutations in the hematopoietic transcription factor gene GATA2 (Camargo JF et al. 2013), and is clinically manifested as nontuberculous mycobacterial infection at cutaneous sites or genital human papillomavirus infection, which has a high risk of progression to genital cancer (Vinh DC et al. 2010).

Atherosclerosis is thickening of the arterial wall caused by accumulation of cholesterol, which leads to plaque formation and clogged arteries. It is a major risk factor for cardiovascular diseases which include peripheral arterial disease, coronary heart disease, stroke and heart attack. Inflammatory monocytes are the major cellular component in atherosclerotic plaques (Zhang D et al. 2012). It has been shown that classical monocytes accumulate in atherosclerotic plaques through recruitment via CD192, CD195 and CX3CR1, and play a major role in plaque progression, thus exacerbating the disease. They contribute to vascular inflammation in atherosclerosis by producing inflammatory cytokines and inducing T cell activation through CD40-CD40L interaction (Yang J et al. 2014). Mice deficient in CX3CR1 exhibit reduced disease severity in a mouse model of atherosclerosis, due to the reduced survival of infiltrating monocytes and macrophages (Combadie’re C et al. 2003). This indicates that therapeutic inhibition of monocyte recruitment could significantly impact atherosclerosis progression. In addition, monoclonal antibodies against CD40L reduced atherosclerosis related complications, suggesting that inhibiting monocyte/macrophage CD40 signaling in cardiovascular disease could a beneficial therapeutic strategy (Kawai T et al. 2000).

Alzheimer’s disease (AD) is the most common neurological disorder affecting older people worldwide. It is characterized by the presence of amyloid-beta (Aβ) plaques within the brain parenchyma. Studies have shown that Aβ can recruit monocytes into the brain (Feng Y et al. 2011). However, circulating and infiltrating monocytes have been shown to clear Aβ plaques (Thèriault O et al. 2015). Although both monocyte subsets play a role in AD, non-classical (Ly6Clow/CD14low CD16hi) anti-inflammatory monocytes more significantly contribute to the removal of Aβ plaques in AD patients and mouse models of AD (Thèriault P et al. 2015). This patrolling monocyte subset eliminates Aβ microaggregates by internalizing and transporting them from the brain microvasculature to the blood circulation (Michaud JP et al. 2013). Studies have also shown however that infiltrating monocytes demonstrate impaired phagocytic capacity in AD, thus reducing their ability to phagocytose Aβ plaques (Karlmark KR et al. 2012). This indicates that the mechanisms utilized by infiltrating monocytes for Aβ plaque removal is not solely dependent on their phagocytic ability.

Recent studies have demonstrated conflicting roles for monocytes in tumorigenesis and tumor clearance. Monocytes can mediate anti-tumor responses by presenting tumor-associated antigens to tumor infiltrating cytotoxic T cells (CTCs) to induce tumor killing. However, monocyte activity is often deactivated in cancers, leading to the reduced ability of monocytes to activate CTLs and secrete the inflammatory cytokines IFN-gamma, TNF-alpha and IL-12. In addition, monocytes within the tumor microenvironment demonstrate an enhanced ability to produce IL-10, an immunosuppressive cytokine (Pardoll D 2003).  This demonstrates the inhibitory role the tumor environment plays on the anti-tumor function of monocytes. Myeloid derived suppressor cells, which originate primarily from Ly6Chi monocytes, also secrete IL-10 to suppress the activity of tumor infiltrating T cells. Co-culture of CD14+ monocytes with a variety of tumor cells showed that tumors express high levels of prostaglandin that also plays a role in deactivating the anti-tumor function of monocytes (Doseff AI and Parihar A 2015).

These studies clearly demonstrate that in the context of disease, monocytes often play dual roles and could be key therapeutic targets for disease treatment.