Natural killer (NK) cells are a subset of cytotoxic lymphocytes that function predominately in the innate immune response. They were named “natural killers” because of the initial notion that they did not require activation in order to perform their cytotoxic functions. NK cells play a major role in the rejection of cells lacking the self-markers of MHC class I, particularly tumor and virus infected cells.

NK cell function is controlled by a wide range of cell surface receptors, which either have an activating cytotoxic function, or are inhibitory having an immunoregulatory role (Mandal and Viswanathan 2014), examples of these receptors are show in the table below. The intensity of the expression of CD56 on human NK cells has been seen as an indicator of function; with CD56bright NK cells (10% of the population) being inhibitory (producing cytokines) and CD56dim NK cells (90% of the population) being cytotoxic (Caligiuri 2008).  Cytotoxicity is regulated by the interplay between activating and inhibitory signals. Inhibitory receptors prevent NK activation by recognition of self MHC class I.

While NK cells express cell surface molecules that are also found on B cells they are morphologically and functionally more similar to T cells. Development is primarily in the bone marrow, like cells from the myeloid lineage, but NK cell development can also take place in the lymph nodes and liver (Freud et al. 2005 and Andrews and Smyth 2010). NK cells arise from the lymphoid lineage being derived from a CD34+ common lymphoid precursor cells; developing into a NK cell after progressing through an intermediate Pro natural killer cell stage. During these stages of development, different surface antigens are expressed enabling detection of these specific cells. Figure 1 below shows the NK cell lineage of both humans and mice alongside key markers for the different stages of development. For further information on NK cell development, refer to our NK cell mini-review. 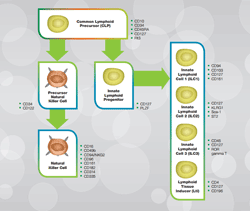 Traditionally, in humans, NK cells are defined as CD56+ and CD3- and in mice as CD161+ (NK1.1). Many other markers have been discovered including those that identify NK cells at various stages of development or indicate whether the NK cell is involved in activation (cytotoxic) or inhibitory functions. For full details of these markers, refer to our NK cell mini-review, which lists these markers for human and mice.