Toll-like receptors are microbial-sensing proteins that recognize a wide range of pathogens, they are a critical protein in the initial protection against infection; generating an immediate yet relatively nonspecific response. This mini-review highlights the role TLR play in innate immunity including information on TLR signaling pathways and the molecules associated with them.

Toll-like receptors (TLRs) are essential components of the innate immune response and are therefore one of the key factors involved in recognizing and defending against invading pathogens. They are transmembrane receptors that can be localized to either the cell surface or to endosomal vesicles. They belong to the pattern recognition receptor (PRR) family along with the mannose (CD206), NOD, and NALP receptors. Since they are involved in self- vs. non-self identification, they are also thought to be implicated in autoimmune disease.

Toll-like receptors constitute a family of proteins essential to the innate immune system that is conserved from plants to mammals.

In 1996 and 1997, Lamaitre and colleagues showed that the gene Toll, a dorsoventral regulator of Drosophila development, was also involved in the innate immune response to fungi and gram-positive bacteria (1, 2). This role was consistent with the structural similarity of the intracellular domain of Toll to the interleukin-1B receptor.

Almost at the same time, Janeway’s group cloned one of the mammalian homologs of Drosophila Toll, later named Toll-like receptor 4 (TLR4). They observed that a dominant active form of TLR4 was able to stimulate NFkB and NFkB-dependent inflammatory genes, and that TLR4 induces the expression of CD80 (3).

Expression of the CD80 co-stimulatory molecule is necessary for the activation of naive T lymphocytes, and its induction by TLR4 was the first evidence that the innate immune system could participate in the polarization of naïve T lymphocytes and activate adaptive immunity (3).

While the expression of TLRs is very broad, with several tissues expressing more than one type of TLR, the highest expression level and the largest range of TLRs is on those tissues involved in innate immunity (4).

The intracellular domain of the TLRs is designated Toll/IL-1 (TIR), due to similarities to the IL-1 receptor, while the extracellular part contains a leucin-rich repeat (LRR) domain. TIR, is known to be involved in signal transduction, while the LRR is believed to directly recognize the cognate ligand.

Upon ligand binding, TLRs dimerize or associate with other receptors. The TIR domain interacts with other TIR containing intracellular proteins.

Four intracellular adaptor proteins that contain a TIR domain have been described: 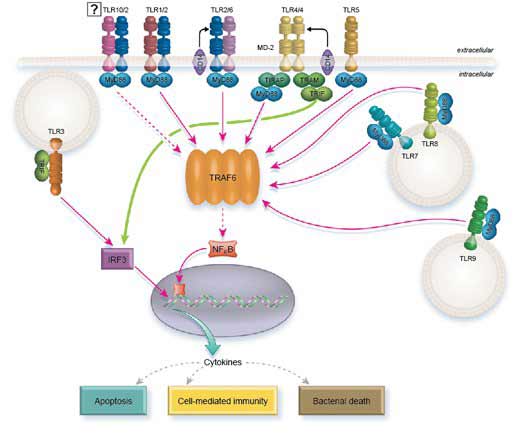 All the TLRs, except TLR3, can signal through MyD88. However, TLR2 and TLR4 require TIRAP to recruit MyD88. In turn, MyD88 recruits IRAK1 and IRAK4 which dissociate from MyD88 following phosphorylation. Next, IRAK1 and IRAK4 interact with TRAF6 which in turn activates the NFkB pathway, AP1, and IRF5, ultimately stimulating the transcription of inflammatory cytokines.

To complete this task, TRAF6 directly phosphorylates IRF5, while activating AP1 through MAP kinases. The release of NFkB from its IKB inhibitor requires the recruitment of TAK1 and TAB proteins from TRAF6 that act on IKB kinase (IKKa/IKKB/NEMO).

Instead of acting through MyD88, TLR3 signals through TRIF. However, the pathway ends up activating the same effectors: NFkB, AP1, IRF3, and IRF7.

TLR4 is unique in that it uses both MyD88 and TRIF as intracellular adaptor molecules. It also requires the bridge molecule TRAM to recruit TRIF and TIRAP to recruit MyD88.

Interestingly, it appears that TLR4 uses both pathways sequentially and not from the same compartment (5). When TLR4 binds LPS, TIRAP is recruited and in turn recruits MyD88 signaling from the plasma membrane to activate cytokine transcription. LPS also promotes the internalization of TLR4 through endocytosis, an event that switches off MyD88 signaling. At this point the internalized TLR4 continues to signal from the endolysosome compartment, but now it acts through TRAM/TRIF and leads to the transcription of interferon genes.

For further information on pattern recognition receptors including TLRs please visit our Pattern Recognition Receptor webpage and review the range of antibodies available.