Induction of apoptosis is achievable by a number of means depending on the pathway (intrinsic or extrinsic) by which apoptosis is to be initiated. In cell lines intrinsic apoptosis can be induced by stimuli including removing growth factor supplements from cell media, exposure to UV light or by exerting other stressful conditions on the cell as shown on the left of Figure 1. Extrinsic apoptosis can be activated in cell lines by addition of certain cytokines such as tumor necrosis factor (TNF) alpha or TNF-related apoptosis-inducing ligand (TRAIL). Here we will examine some of the key factors important in the induction of apoptosis.

The intrinsic pathway can be initiated by conditions such as a withdrawal of growth factor supplements from culture media, exposure to UV light or cell stresses (for instance osmotic or metabolic). These conditions ultimately lead to the damage of DNA cells. In the case of exposure to UV light, the adsorption of a UVB photon causes adjoining thymine base pairs to form pyridimine dimers. Growth factor withdrawal or other stressful conditions can lead to increased production of reactive oxygen species (ROS). ROS can damage DNA by several means including base modification, single strand breaks and crosslinking. DNA damage exerts a pro-apoptotic influence on members of the B-Cell Lymphoma 2 (Bcl-2) family which regulate the intrinsic apoptosis pathway.

The extrinsic pathway is triggered by the binding of ligands to so called “death receptors” (DR), for instance CD95, DR3/4/5 as shown in Figure 1. The death receptors CD120a, CD95 and TRAIL receptors, called DR3, DR4, DR5 and DR6, are grouped under the TNF receptor superfamily. This family also includes TWEAK (TNF-like weak inducer of apoptosis) receptor (CD266 / Fn14) which interacts with its ligand TWEAK (CD255) inducing apoptosis in some tumor cell lines through pathways yet to be fully elucidated.

Upon ligand binding, most death receptors oligomerize and recruit adaptor proteins such as FADD and the pro-caspases -8 and -10. This assembly and recruitment occur as a result of the presence of protein interaction modules called the death domains. Death domains are 80–100 residue long motifs found on DRs and other molecules associated with apoptotic signaling. Individual death domains bind to one another through complementary electrostatic interactions causing the two molecules to assemble.

CD95, also known as FAS, is primarily expressed in activated T lymphocytes and natural killer (NK) cells. It can induce apoptosis upon the binding of its ligand CD178 (FasL). This apoptotic influence plays a role in the resolution of immune responses and maintenance of immune homeostasis. CD95 also plays a role in the elimination of virally infected and cancer cells by cytotoxic lymphocytes and NK cells. Table 1 below lists the antibodies against CD95.

CD120a (TNFR1) is a ubiquitously expressed transmembrane glycoprotein and member of the tumor necrosis factor receptor superfamily (TNFRSF), which acts as a receptor for TNF-alpha and lymphotoxin-alpha (TNF-beta). Table 2 below lists the antibodies against CD120a. Mouse Anti- Human CD120a Antibody (clone H398) inhibits the biological activity of both natural and recombinant human TNF-alpha and TNF-beta (Thoma et al. 1990 and Dri et al. 1999). The ability to selectively inhibit CD120a and the effect of its activation provide a tool for dissecting apoptotic signaling pathways.

CD120b (TNFR2) is expressed on lymphocytes, monocytes and granulocytes. CD120b lacks a cytoplasmic death domain and activates inhibitors of apoptosis (cIAP1 and cIAP2). Binding of TNF-alpha to CD120b has been reported to induce cell death in T lymphocytes while promoting cell survival in renal tubular cells. Table 3 lists the antibodies available targeting CD120b. 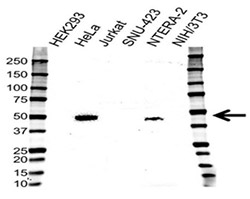 Figure 2 shows expression profile of CD120b in a number of cell lines using an antibody highly validated for use in western blotting (VPA00343). Choosing a cell line with robust expression is important when studying the effect of CD120b on apoptosis.

CD261, also known as DR4 or TRAIL- R1, is expressed in most human tissues including spleen, peripheral blood leucocytes, thymus and in a variety of tumor-derived cell lines including K-562 and MCF7. The binding of TRAIL to DR4 triggers the activation of pro-caspases-8 and 10, leading to apoptosis. Table 5 lists the antibodies available against CD261.

CD262, also known as DR5 and TRAIL-R2, is expressed widely in adult and foetal tissues. Binding of TRAIL to CD262 recruits FADD, induces assembly of the death inducing signaling complex (DISC) and activates the extrinsic apoptotic pathways. Table 6 lists the antibodies against CD262.

CD266, also known as TNFRSF12A or Fn14, is expressed by a variety of tissues, including heart, lung and kidney and at elevated levels by human brain and liver tumors. CD266 is not expressed on primary T or B cells. Binding of TWEAK to CD266 can stimulate several cellular responses including proliferation, inflammation or apoptosis depending on the cellular context. Table 7 shows a list of the available CD266 antibodies.

Apoptosis of virally-infected cells and primary tumor cells may be induced by cytotoxic T lymphocytes (CTLs) through the release of perforin and granzymes from cytoplasmic cytolytic granules. Granzymes (highly homologous serine proteases) are activated through the cleavage of an amino-terminal dipeptide. Table 8 lists antibodies against granzymes.

Granzyme A  induces caspase-independent cell death characterized by DNA fragmentation. An important target of granzyme A is the endoplasmic reticulum-associated SET complex. The SET complex translocates into the nucleus where the activated DNase NM23-H1 causes characteristic single-stranded DNA damage.