The middle phase of apoptosis is characterized by liberated B-cell lymphoma 2 (Bcl-2) family members Bcl-2 homologous antagonist killer (BAK) and Bcl-2 -associated x protein (BAX) as well as active caspase-8. Figure 1 details an abridged version of the mid phase of apoptosis which involves significant alterations to mitochondria and cell membrane as well as caspase activation. Highly important among these molecular events is the loss of mitochondrial membrane integrity which represents an irreversible commitment of the cell to apoptosis. These cellular phenomena are measurable using several applications including by flow cytometry, western blot and cell imaging techniques.

Fig. 1. Mid phase of apoptosis. In the intrinsic pathway BAX and BAK create a pore within the outer membrane of the mitochondria which leads to membrane depolarization and release of pro-apoptotic factors. The factors released form the signaling complex known as the apoptosome. Apoptosome formation leads to caspase-9 activation. Caspase-9 activates the effector caspases (caspase-3/caspase-7). In the extrinsic pathway caspase-8 activates the effector caspases.

Liberation of BAK and BAX leads to the formation of a pore in the outer membrane of the mitochondria. This represents a “point of no return” in the cells commitment to apoptosis. Until this point several of the apoptotic signals are considered reversible but disruption of the mitochondrial membrane sets the cell on an irreversible path towards apoptotic death. Loss of mitochondrial membrane integrity leads to depolarization of the mitochondrial membrane and release of pro-apoptotic factors such as cytochrome c and endonuclease G (Endo G) into the cytoplasm. Endo G translocates to the nucleus where, in the late stage, it will begin to degrade DNA. Cytochrome c released into the cytoplasm binds apoptosis protease activating factor 1 (APAF-1) and dATP, forming the apoptosome. Apoptosome formation triggers cleavage of pro-caspase-9 into its active protease form, caspase-9. Caspase-9 is an initiator caspase that then activates downstream effector caspases, such as caspase-3 and caspase-7, through proteolysis, triggering the caspase cascade that leads to late stage apoptotic events such as DNA fragmentation.

Activation of the effector caspases is the point when the intrinsic and extrinsic pathways converge. To differentiate between the pathways, target your assay of choice prior to this point. 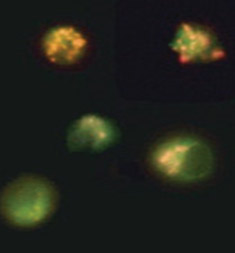 Mitochondrial outer membrane permeabilization is the cells’ “point of no return” in the apoptosis process. This is mediated by the opening of permeability transition (PT) pores, also known as the mitochondrial PT event. It can be measured by the accompanying change in the mitochondrial membrane potential. This change  can be detected by three fluorescent cationic dyes: 5,5’,6,6’-tetrachloro-1,1’,3,3’-tetraethylbenzimidazolocarbocyanine iodide (JC-1), tetramethylrhodamine ethyl ester (TMRE) and tetramethylrhodamine methyl ester (TMRM).

TMRM is a cell permeable red/orange dye highly similar to TMRE. It has an overall positive charge which causes it to accumulate within the negatively charged mitochondria. When the mitochondria is compromised the dye cannot accumulate and the intensity of fluorescence decreases significantly.

APAF-1 is a key protein of the intrinsic apoptosis pathway. APAF-1 contains several functional domains including a caspase recruitment domain. Under non-apoptotic conditions APAF-1 is in an inactive monomeric state. Upon binding to cytochrome c, APAF-1 oligomerizes as part of apoptosome formation which leads to caspase-9 and effector caspase activation.

Endo G is a 30 kDa protein originally identified in nuclear extracts of chicken erythrocytes that was found to cleave guanine (G) tracts in vitro in DNA. Subsequent work in mammalian cells confirmed that endo G relocates to the nucleus during apoptosis where it cleaves chromatin and DNA. Endo G forms part of a caspase independent pathway capable of inducing apoptosis.

Once activated by caspase-8, effector caspases inhibit phosphatidylserine (PS) flippase, leading to the exposure of PS at the outer plasma membrane (in healthy cells PS is restricted to the inner plasma membrane).

Caspases play critical roles in regulating apoptosis. All caspases are synthesized in inactive forms, referred to as pro-caspases, that require dimerization/oligomerization and subsequent cleavage for activation. The major caspases involved in apoptosis are listed on the apoptosis homepage including molecular weights of both full length inactive (pro-caspase) and cleaved active forms (activated caspase).

Inhibitors of apoptosis proteins (IAPs) are a class of highly conserved proteins predominantly known for the regulation of caspases. IAPs are characterized by the presence of a conserved sequence known as the Baculovirus IAP Repeat (BIR) domain. The BIR domain is a zinc ion coordinating protein–protein interaction motif. IAPs are highly conserved and were discovered in a genetic screen of baculoviral genome as inhibitors of host programmed cell death machinery, hence named IAPs. Table 2 lists the 8 mammalian IAPs.

IAPs regulate apoptosis via inhibitory interactions with primarily caspase-3 and caspase-9. In the case of BIRC4 (XIAP) this inhibition involves preventing caspase-9 activation by the apoptosome as well as direct inhibition of caspase-3.

Fluorescent Labeled Inhibitors of Serine Protease (FLISP) Kits allow the detection of intracellular chymotrypsin-like activity of serine proteases in live cells. Thought to be activated downstream of caspases, serine proteases are more active in apoptotic cells and can therefore be used as a method to detect general levels of apoptosis. The kits contain a FAM labeled inhibitor probe that covalently binds to active serine proteases within the cell. Different serine proteases can be detected depending upon the probe used.