Figure 1 below shows the T cell lineage of human helper T cells alongside key markers for the different stages of development.

For further information on T cell development in humans or mouse, please refer to our collection of posters and guides. 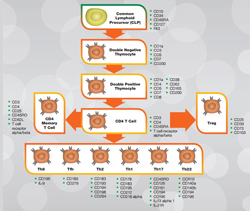 This guide provides a quick snapshot of the function of each T cell subset, as well as their biological profile. You can also access antibodies for studying these cells. It is intended to help you quickly identify the key information needed to design experiments to study these critical immune cells.

Th1 cells are mainly involved in controlling intracellular pathogens such as viruses and certain bacteria. They primarily induce cell-mediated immunity through the secretion of cytokines that increase macrophage recruitment and phagocytosis. They also stimulate cytotoxic T cell (CTL) responses.

Autoimmune diseases such as rheumatoid arthritis, multiple sclerosis and diabetes are described as Th1-dominant diseases.

Th2 cells are mainly involved in the humoral response. They are necessary for the production of IgE antibodies and some subclasses of IgG. They also play a role in host defense against parasites and in allergic responses as well as in asthma, lupus and inflammatory bowel disease. Recent studies have distinguished Th2 cells involved in immune protection, from those that drive allergic responses. Allergy-inducing Th2 cells have been designated as Th2A cells and are characterized as CD294+CD161+CD49d+CD27-CD45RBloCD197loCD7lo.

Th9 cells are important for host defense against parasitic helminth infections. However, they have also been shown to contribute to the development of chronic allergic inflammation and autoimmune disease.

Th17 cells play a role in host defense against extracellular bacteria and fungi. Accordingly, they are found at the interface of the extracellular and intracellular environment such as the skin and lining of the GI tract. These cells are also involved in the induction of autoimmune tissue injury. This autoimmune effect is linked to insufficient regulation by T regulatory (Treg) cells, resulting in a lack of resolution of the initial immune response.

Th22 cells have been suggested to be involved in host defense against microbial pathogens, as well as to promote tissue repair and remodeling. These cells also play a role in pathogenesis of skin disorders such as psoriasis.

TFH cells stimulate B cells to mature into antibody-secreting plasma cells. These cells are antigen-experienced, and are primarily located in the periphery within B cell follicles of secondary lymphoid organs.

tTregs or nTregs develop in the thymus, where they are positively selected in the cortex through interaction of their TCR with self-peptides presented by thymic stromal cells. They are primarily involved in the regulation of immune responses and maintenance of immune tolerance to prevent autoimmunity.

pTregs or iTregs are derived in the periphery from naïve CD4+CD25-Foxp3- cells. Similar to nTregs, these cells suppress immune responses to self antigens to protect against autoimmunity. They are separated into subsets, which include Tr1 and Th3 cells. Tr1 cells regulate immune responses to commensal organisms and maintain tolerance in the gut. Th3 cells, on the other hand, mediate tolerance induced by oral antigen delivery. Under certain conditions, Th17 cells can switch to Treg cells, particularly in the defense against fungal pathogens. This is an important stage in the resolution of Th17 immune responses as it is this switching that prevents the development of autoimmune disease or over activation of the immune response.