The Notch Signaling Pathway and its Physiological Functions

The Notch signaling pathway is named after an X-linked, dominant mutation that was first isolated in Drosophila, which caused irregular tissue loss (notches) at the tips of the wing blades (Mohr 1919). However, it is now known that Notch signaling regulates multiple aspects of invertebrate and vertebrate development in a number of cell types including cardiac, endocrine and immune cells (Fortini 2009). Notch signaling remains active in the adult where it is involved in processes ranging from the maintenance of stem cell populations and differentiation to synaptic plasticity and memory formation (Kopan and Llagan 2009). Perturbations in Notch signaling have been implicated in cancer biology and in neurological disease.

Notch and its role in cell signaling

Notch receptors expressed on the ‘signal receiving cell’ undergo a series of sequential proteolytic cleavages to yield an intracellular fragment that directly mediates transcriptional regulation of Notch target genes. (Kadesch 2000; Fiúza and Arias 2007; Kopan and Llagan 2009; Baron 2012). The first cleavage (S1) occurs in the Golgi apparatus by a furin-like convertase generating two fragments that remain non-covalently attached to form the mature Notch receptor at the cell surface. However, there is conflicting evidence as to whether this cleavage step is always required to activate Notch signaling. Notch ligands belonging to the Delta and Serrate families, known as delta-like and Jagged in mammals, expressed on the ‘signal sending cell’, bind to Notch leading to the second cleavage (S2). This cleavage is mediated by a disintegrin and metalloproteinase domain-containing protein 10 (ADAM 10) or tumor necrosis factor alpha converting enzyme (TACE/ADAM 17 or Kuzbanian in Drosophila). Cleavage results in shedding of the extracellular domain to yield a membrane-associated intermediate fragment called the Notch extracellular truncation (NEXT). Notch ligands are also transmembrane proteins and therefore cell-to-cell contact is an important prerequisite to trigger Notch signaling. The second cleavage is followed by a constitutive cleavage (S3) within the transmembrane domain of Notch by gamma-secretase; a complex that comprises Presenilin-1, Nicastrin, APH-1 and PEN-2. Cleavage by gamma-secretase occurs both at the cell surface and in endosomal compartments. This cleavage releases the Notch intracellular domain (NICD), which migrates to the nucleus where it interacts with C-promoter binding factor-1 (CBF-1). CBF-1 is a transcription factor belonging to the CSL family {Suppressor of hairless (in Drosophila) and Lag-1 (in C. elegans)}, also known as recombination signal sequence-binding protein jk (RBPjk).

CBF-1 forms a complex with a number of transcriptional repressor proteins and histone deacetylases (HDACs) that promote gene silencing (Kadesch 2000; Fiúza and Arias 2007; Kopan and Llagan 2009; Baron 2012). In Drosophila the repressor complex comprises Hairless, C-terminal binding protein (Ct-BP) and Groucho, while in mammals the complex includes CBF-interacting repressor (CIR), silencing mediator for retinoid and thyroid receptor (SMRT), nuclear receptor co-repressor (NCoR) and Ski-interacting protein (SKIP). The entry of the NICD into the complex displaces repressor proteins and allows the entry of transcriptional activators such as Mastermind (MAM), thus enabling target gene transcription. Recognized Notch target genes include the hairy enhancer of split (HES) family and the HES related protein (HERP) family that belong to the basic helix-loop-helix (bHLH) transcription factor family, which suppress differentiation (Borggrefe and Oswald 2009). It should be noted that Notch can signal independently of the CSL family and involves cross-talk with other signaling pathways such as the Wnt and NFkB pathways (Sanalkumar et al., 2010; Andersen et al., 2012). Furthermore, a number of atypical Notch ligands have been identified in mammals (Fortini 2009). These include F3/Contactin, Delta/Notch-like EGF-related receptor (DNER) and the mammalian microfibril-associated glycoprotein family (MAGP-1 and MAGP-2). Interestingly, MAGP only activates Notch receptors expressed in cis on the same cell. 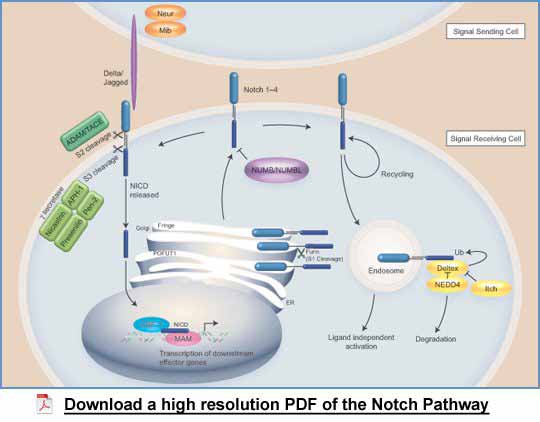 Notch-mediated transcriptional activation is downregulated by the degradation of the NICD in the nucleus (Bray 2006; Fiúza and Arias 2007). SKIP and Mastermind recruit kinases that specifically phosphorylate NICD in the TAD and PEST domains. Subsequently, Notch becomes susceptible to ubiquitination by F-box/WD repeat-containing protein 7 (Fbw7/Sel10) leading to NICD degradation. Thus, continuous ligation of the Notch receptor at the cell surface is required in order for Notch signaling to be maintained.

A number of studies have reported that endocytosis of Notch contributes to the signal activation process, but the molecular details are unclear at present (Le Borgne 2006; Fiúza and Arias 2007; Baron 2012). A body of evidence suggests that endocytosis is required for ligand-induced activation of Notch, while other studies demonstrate that Notch signaling can be activated in the endosomal pathway independently of its ligands through the activity of Deltex (Dx); a Ring-domain Ubiquitin ligase that binds to the NICD. The E3 ubiquitin ligases (HECT type), neural precursor cell-expressed developmentally down-regulated protein 4 (NEDD4) and Suppressor of Deltex (Su(Dx)) (Itch/atrophin-1-interacting protein 4 in mammals) are negative regulators of Dx and serve to target Notch for lysosomal degradation and therefore down-regulate Notch signaling. It is thought that NEDD4 and Su(Dx) prevent inappropriate ligand-independent activation of Notch signaling.

Regulation of Notch ligand activity on the ‘signal sending cell’

The E3 ubiquitin ligases, Neuralised (Neur)  and Mind bomb (Mib) are implicated in Notch ligand activity through a process involving ubiquitination and endocytosis (Bray 2006; Kopan and Llagan 2009). It has been hypothesized that endocytosis of ligand generates a ‘pulling’ force on a bound Notch receptor that causes a conformational change that subsequently instigates proteolysis and cell signaling. An alternate theory is that ubiquitination promotes ligand clustering, which appears important for Notch signal activation.

The EGFRepeats present in the Notch extracellular domain are sites for glycosylation (Bray 2006; Kopan and Llagan 2009). The enzyme O-fucosyl transferase (OFUT) (peptide-O-fucosyltransferase; POFUT in mammals) adds the first fucose to the Notch receptor and is essential for the generation of a functional receptor. OFUT also functions as a chaperone to promote the correct folding and transport of Notch from the endoplasmic reticulum to the cell membrane. The Fringe family subsequently elongates the carbohydrate chains resulting in a plethora of glycosylated Notch species. Interestingly, the pattern of glycosylation can influence the capability of ligands to activate Notch in a context and cell type specific manner.

Notch signaling is inhibited by the membrane associated protein Numb (Numb and Numb-like in mammals), which consequently promotes differentiation and cell fate assignment (Le Borgne 2006; Fortini 2009). Numb inhibits Notch directly and is also thought to target Notch for ubiquitination and degradation through a mechanism involving alpha-adaptin and endocytosis. Furthermore, evidence suggests that Numb can antagonize Notch signaling in Drosophila through endocytosis of the plasma membrane pool of Sandopo, a multipass transmembrane protein, which normally serves to enhance Notch signaling. The asymmetrical inheritance of Notch regulators such as Numb during mitosis results in two daughter cells adopting different fates. Such regulatory mechanisms of Notch signaling allow for a more complex pattern of Notch activation than the purely random pattern of mosaic differentiation predicted using the ‘lateral inhibition’ model. Notch signaling is also involved in boundary formation (inductive signaling) between two layers of adjacent cells and is due to the differential expression of Notch ligands or other Notch regulatory proteins in the ‘signal sending cells’ along the boundary.

Notch signaling in the immune system

Notch signaling is important for the induction of T cell fate and at later stages of T cell development Notch has been proposed to play a role in CD4/CD8 lineage commitment (Robey et al., 1996). CD4 cells can be subdivided into type 1 (Th1) and type 2 (Th2) depending on the cytokine profile they secrete and the main immune cells that the T cells interact with. Notch has been proposed to regulate Th1/2 lineage decisions in naïve T cells and these lineage decisions are dependent on the type of Notch ligands expressed by antigen presenting cells such as dendritic cells (Cheng and Gabrilovich 2008; Amsen et al., 2009; Radtke et al., 2010). Notch signaling also plays a role in the determination of alpha/beta versus gamma/delta T cell receptor (TCR)  lineage decisions. Interestingly, the gamma/delta TCR heterodimer does not require classical antigen processing and MHC presentation in order to initiate cell signaling and also plays a role in the recognition of non-peptide antigens. Evidence suggest that Notch signaling favors the alpha/beta lineage, which is the TCR heterodimer combination expressed by the vast majority (>95 %) of T cells (Washburn et al., 1997; Maillard et al., 2005).

In addition, Notch is implicated in the late stages of B cell development and is important for the terminal differentiation of B cells into antibody secreting cells as well as the development and proliferation of non-circulating marginal zone B cells found in the spleen (Borggrefe and Oswald 2009; Moriyama et al., 2008; Sekine et al., 2009). Furthermore, Notch plays a role in the differentiation of natural killer cells, mast cells and dendritic cells (please add reference even a review is acceptable). Interestingly, Notch ligands exert differing effects on the differentiation of dendritic cells and the expression pattern of Notch ligands is different in the bone marrow compared to the spleen (Cheng and Gabrilovich 2008; Sekine et al., 2009).

Notch can act as both an oncogene and a tumor suppressor depending on cell context (Koch and Radtke 2007). A prime example of oncogenic Notch signaling is provided by T-acute lymphoblastic leukemia (T-ALL), which is an aggressive neoplasm of immature T cells. In this disease, gain-of-function mutations give rise to constitutively active forms of Notch (Aster et al., 2008; Borggrefe and Oswald 2009). Notch signaling is also implicated in mammary tumorigenesis since integration of the mouse mammary tumor virus (MMTV) into the gene ending Notch 4 leads to the formation of mammary tumors. MMTV integration into the gene results in the transcription of a truncated Notch receptor (INT3) that is constitutively active. In addition, Notch signaling is involved in the pathogenesis of certain colon cancers (Qiao and Wong 2009) and the Notch target genes c-Myc and cyclinD1 are oncogenes involved in many types of cancer (Borggrefe and Oswald 2009).

Paradoxically, the cell cycle regulator, p21/Waf1 is also a Notch target gene. p21 mediates cell cycle arrest and thereby can confer tumor suppressive effects. Consistent with Notch possessing a tumor suppressive role in certain cellular contexts, a number of cancers particularly squamous cell carcinoma are associated with loss-of-function mutations in Notch (South et al., 2012). This is because in some tissues, including the skin, Notch serves to direct differentiation.

The importance of Notch signaling in the adult central nervous system is demonstrated by cerebral autosomal dominant arteriopathy with subcortical infarcts and leukoencephalopathy (CADASIL), Allagile and Hajdu-Cheney syndromes (Ables et al., 2011). These diseases are characterized by functional mutations in key Notch pathway signaling intermediates and patients exhibit cognitive impairment and/or neurodegeneration. Notch is an important regulator of adult neural stem cells in the subventricular zone of the lateral ventricles and the subgranular zone of the hippocampus. However, Notch and its signaling partners are expressed throughout the adult brain suggesting that Notch plays a role beyond the regulation of adult neurogenesis. In line with this, Notch is implicated in neuronal migration in the cerebral cortex through the regulation of cell morphology. Furthermore, Notch plays a role in dendritic arborization and synaptic plasticity and thereby at a functional level spatial learning and memory.

Click on the links below to explore our product range through the various categories.