Epithelial to mesenchymal transition (EMT) is a process by which epithelial cells lose their orientation, cell to cell contacts and adopt the mobile characteristics of mesenchymal cells. EMT is not a change between two solid states but rather a process by which cells can move along a phenotypic spectrum (Figure 1). This is demonstrated by the existence of the reverse of EMT, mesenchymal to epithelial transition (MET). Figure 1 shows epithelial cells aligned with other epithelial cells and exhibiting the usual polarity. At this point the EMT inducing stimulus occurs, activating various signaling pathways leading to loss of epithelial gene expression. Following this, cell to cell contacts are removed, cells become more mobile and protease expression increases leading to cells escaping their local environment. Once the cells have reached their new location, the reverse process can occur beginning with an inhibition of mesenchymal gene expression and ending with the return of the cell to an epithelial structure. 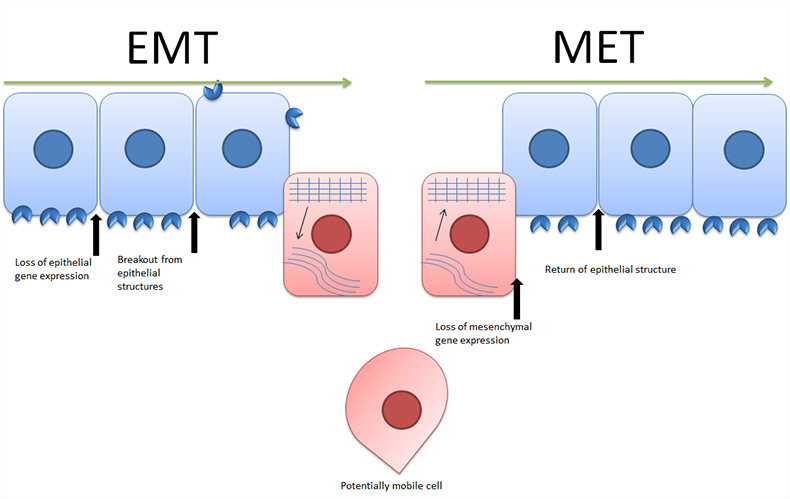 In addition to the changes in gene expression EMT also induces changes in cell polarity, matrix metalloprotease (MMP) expression and cytoskeletal realignment. The combination of these changes empowers the cell with the ability to detach from its neighbours, escape from the local environment and enter the bloodstream. Once free from the constraints of tertiary epithelial structures  the cell can migrate in response to local environmental cues. 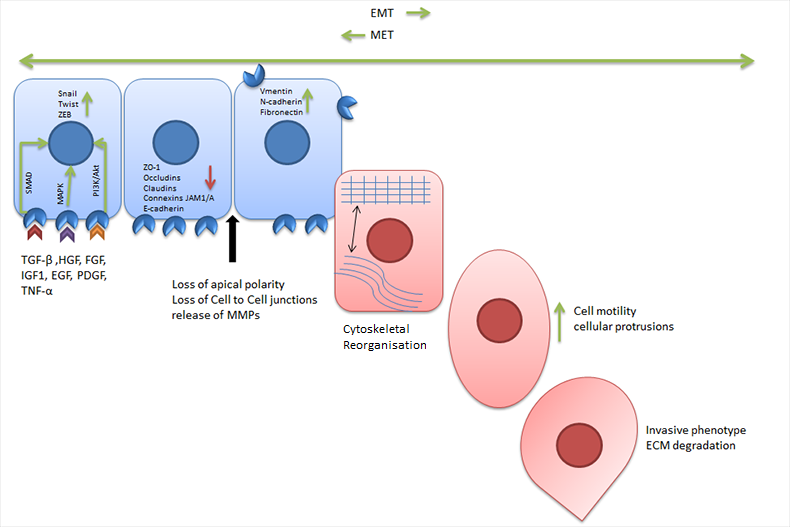 EMT has been proposed as a mechanism by which particular epithelial cancers spread from an initial tumor site to secondary sites (metastasis). Under this hypothesis secondary tumors are formed by a cancer cell undergoing EMT, escaping its local environment and relocating. Upon this relocation the reverse process MET would occur. The process of regaining its epithelial characteristics is crucial to the cell being able to infiltrate and anchor within its new tumor site. In addition to producing this metastatic influence, EMT related transcription factors also upregulate anti-apoptotic genes (Grille et al. 2003). This conveys a potential increased resistance to apoptosis, a characteristic that has been defined as a “Hallmark of Cancer”. In clinical environments markers of EMT are being used as potential indicators of treatment resistance and overall patient prognosis (Aktas et al. 2009).

While difficult to study in vivo, in vitro approaches to studying EMT and its phenotypical changesmake it relevant to cancer research. Several cell lines if appropriately treated can be induced to undergo EMT. TGF-β treatment is the most common inducer of EMT. Treatment with TGF-β activates EMT in A549 (Kasai et al. 2005), MCF10A (Zhang et al. 2014) and NMuMG (Shirakihara et al. 2007) cell lines.

ZEB1 and ZEB2 can repress or activate transcription through binding of regulatory gene sequences at E-boxes. Through this activity ZEB transcription factors are able to contribute to repression of epithelial genes and transcription of mesenchymal genes. The expression of ZEB1/ZEB2 often follows SNAIL/TWIST (Dave et al. 2011) expression and is induced via TGF-BETA and WNT signaling pathways (Xu et al. 2009).

Several methods including immunofluorescent cell staining and western blotting can be used to verify that EMT has occurred within the cell model. If using immunofluorescence, cells can be probed with antibodies against epithelial markers such as E-cadherin or mesenchymal markers such as vimentin. Cells should have a reduced expression of epithelial and an increased expression of mesenchymal markers. Cells can also be stained for actin and after having undergone EMT will show a more elongated morphology with actin stress fibres and cellular protrusions. Viewing unstained cells should show the loss of the uniform “cobblestone” appearance of epithelial cells and the change to the isolated elongated phenotype of mesenchymal cells. 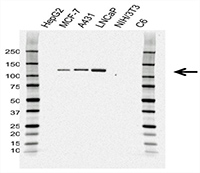