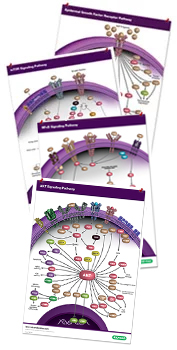 Antibodies for the Analysis and Characterization of Oncoproteins

Cancer is a complex disease that can be triggered by a variety of causes ranging from oncovirus infections to genetic mutations. Exposure to carcinogens and inheritance are two of the main sources for genetic mutations and predominantly occur in seven distinct protein groups (Lodish et al. 2000):

Bio-Rad offers a variety of antibodies and proteins for the analysis of oncoproteins by ELISA, Flow Cytometry, Immunofluorescence, Immunohistochemistry and Western Blotting.

The apoptosis regulator Bcl-2 oncoprotein plays an important role in the decision of whether a cell lives or dies. It acts by controlling the permeability of the outer mitochondrial membrane.

Murine anti-Bcl-2 antibody (clone 100) is frequently used in Immunohistochemistry experiments and has been successfully used to demonstrate the presence of Bcl-2 in tissues of radioresistant squamous cell carcinoma (Condon et al. 2002).

Western blot analysis of Bcl-2 is also frequently performed as part of a large apoptosis panel (including other markers such as Bak, Bax and Bcl-xL).

The genes encoding these proteins present some of the best studied proto-oncogenes, which upon mutation are involved in inducing various cancer types (including bladder, cervical, pancreatic and prostate).