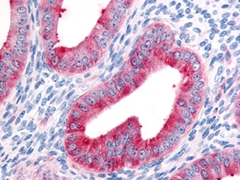 The Stromal Cells of the Tumor Microenvironment

The contribution of the tumor microenvironment to the development, progression and resistance to treatment in cancer is increasingly becoming clear. In breast cancer, tumors present with significant alterations to the surrounding tissue or microenvironment. Depending on the type of breast cancer, these environmental changes can include increased production of fibrous tissue (desmoplasia) as well as transformation of many cell types including fibroblasts and adipocytes.

In addition to neoplastic cells, the breast tumor microenvironment consists of extracellular matrix (ECM) and numerous stromal cell types, including endothelial cells, immune cells, fibroblasts, and adipocytes. Of the cell types, the most abundant and perhaps most significant are the cancer associated fibroblasts (CAFs). CAFs are identified using several markers including fibroblast activating protein (FAP) which is also present in the uterus and other organs (Figure 1). 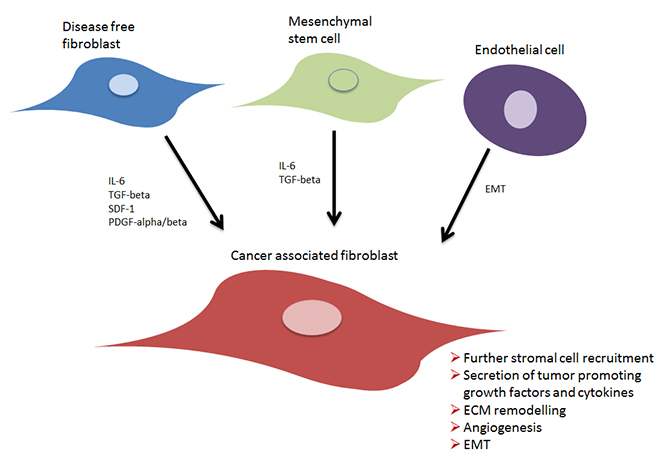 CAFs influence tumor development and progression by secreting many growth factors, interleukins and matrix metalloproteases (MMPs). Several of the markers, secreted factors and relevant pathways are listed in Table 1.

Once transformed to their activated phenotype, CAFs promote tumor growth and metastasis. This is in contrast to disease free fibroblasts which exert an anti-tumorigenic effect (Olumi et al. 1999). The tumor promotion occurs through the release of factors that promote cell growth and recruit new cells into the tumor microenvironment. SDF-1 (CXCL12) promotes survival of cancer cells and is a chemoattractant for other stromal cells (Orimo et al. 2005). IL-6 is a pro-inflammatory cytokine which is produced in substantial amounts by CAFs. IL-6 produced by CAFs also promoted tumor development in a cell model system (Osuala et al. 2015).

CAFs also help the tumor cells to metastasize to secondary sites. One method of achieving this is through their release of TGF-beta. TGF-beta signaling is capable of transforming stationary endothelial cells into mobile mesenchymal cells by EMT (Massague 2008). Similarly hepatocyte growth factor (HGF) can also induce EMT enabling cells to migrate more efficiently. In addition to creating a more mobile cell, CAFs can also edit the ECM to further facilitate invasion and metastasis. Release and activation of MMPs (MMP9 and MMP14) degrade type IV and V collagens and other extracellular matrix proteins enabling cancer cell migration.

Recent evidence has shown that CAFs are capable of shielding tumors from the effect of various treatments. Type I collagen secreted by CAFs creates a physical barrier between the tumor cells and the drugs diffusing from the blood stream. CAFs also mediated treatment resistance in response to gefitinib through activation of Met and EGF R/Met pathway crosstalk (Mueller et al. 2012). Two further studies have shown that CAFs mediated resistance to anti-angiogenic therapy (Pietras et al. 2008) and Cetuximab (Johansson et al. 2012).

CAFs are primarily identified by immunohistochemistry on either paraffin on frozen sections of human tissue. Table 2 shows the IHC validated antibodies against CAF markers.

CAFs can also be identified by flow cytometry. Combining the detectable expression of a CAF marker such as CD140b (Table 3) with the lack of other cell specific markers (for instance CD3, and CD45) may be required to ensure detection of CAFs.

Many of the signaling pathways that affect activation of CAFs and their subsequent behavior remain to be elucidated. A systems biology approach requires western blot validated antibodies against whole proteins and phosphorylated residues (Table 4).