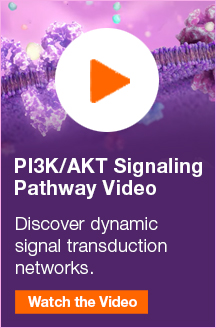 Cell proliferation, motility, and survival are tightly regulated by a network of signaling pathways, preventing uncontrolled cell division. A cell can become cancerous when it undergoes a genetic or epigenetic mutation that allows it to escape this regulation and can then divide rapidly. Unraveling the complex fabric of signaling pathways is crucial for cancer research, and for developing new, life-changing therapies for patients.

The insulin receptor belongs to the large class of receptor tyrosine kinases and, through IRS proteins and the PI3K and ERK cascades, triggers a complex intracellular signaling network. It is involved in the regulation of glucose homeostasis, a physiological mechanism that can lead to a variety of clinical disorders, including diabetes and cancer, when disrupted. 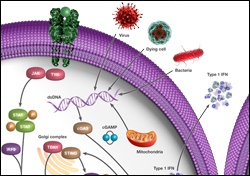 The cGAS-STING pathway is important in microbial infection, autoimmune diseases, and cancer. cGAS detects the presence of cytosolic DNA and initiates a STING-dependent response triggering expression of inflammatory genes. We have compiled key proteins involved in the cGAS-STING signaling pathway into one handy poster you can download for your reference. 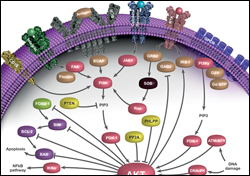 The phosphoinositide 3-kinase (PI3K)/protein kinase B (AKT) pathway is activated in response to many growth factors, hormones, cytokines, and nutrients involved in regulation of numerous important cellular processes including apoptosis, cell proliferation, and the cell cycle. Dysregulated PI3K/AKT signaling is implicated in the pathogenesis of a growing number of disorders, including cancer. Uncover the proteins involved. 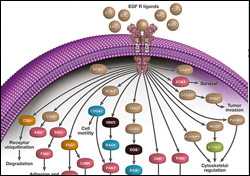 ErbB family members are instrumental in the development and malignancy of various human cancers. Deregulation in signaling networks can be caused by kinase mutations and/or overexpression of the receptor. A better understanding of the precise roles of the various EGF R-mediated signaling pathways is crucial for translating these findings into new cancer therapies. We have compiled key proteins involved in the EGF R signaling pathway into one handy poster. 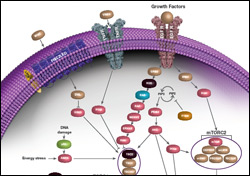 Understanding mTOR signaling provides a basis for developing mTOR inhibitors, and inhibitors of components within the wider signaling pathway. Inhibition of the mTOR pathway is relevant for cancer, obesity, diabetes, and even aging. Uncover the proteins involved. 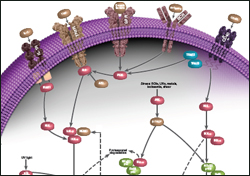 Nuclear Factor-Kappa B is a transcription factor responsible for generating the protective inflammatory response following infection or injury. However, constitutive activation of NF-κB leads to chronic diseases and inflammatory disorders, and promotes cancer progression. Understanding the balance between the roles of NF-κB in cell health and disease is fundamental in the development of targeted inhibitors of inflammation. Uncover the proteins involved. 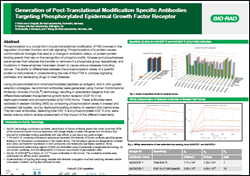 Using in vitro antibody phage display technology with guided selection strategies, we can generate phosphorylation-specific antibodies that meet your needs. 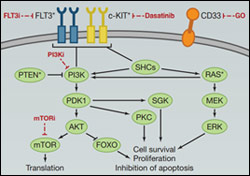 An overview of acute myeloid leukemia (AML) risk stratifications, frequency, and types of genetic alterations, as well as current therapies.

Covers the most common genetic mutations resulting in the development of melanomas, highlights the progression from an aberrant melanocyte to a metastatic melanoma and treatment approaches. 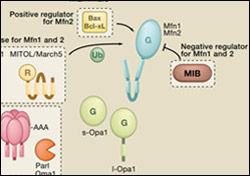 An overview of the mitochondrial fusion-division cycle, and the fusion and division machinery in mammalian cells, yeast, and algae.