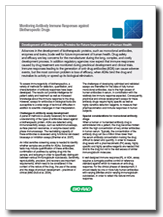 Advances in the development of biotherapeutic proteins, such as monoclonal antibodies, enzymes and toxins, bode well for future improvement of human health. Drug safety and efficacy are key concerns for the manufacturer during the long, complex and costly development process, and regulatory agencies now expect that immune responses caused by drug treatment are monitored during preclinical development and clinical trials. Immune responses leading to the generation of anti-drug antibodies (ADA) can cause adverse events, but the most common problem is loss of efficacy, when ADAs bind the drug and neutralize its activity or speed up its biological elimination.

To assess immunogenicity of biotherapeutics, a variety of methods for detection, quantitation and characterization of antibody responses have been developed, the results of which can provide intelligence for patient safety and treatment as well as increased knowledge about the immune response to the drug. However, assays for antibodies in biological fluids are susceptible to a wide range of technical difficulties in addition to scientific challenges in their interpretation.

A panel of methods is usually necessary for a detailed understanding of the types of antibodies raised against a biotherapeutic protein. ADAs are detected using immunoreactivity assays, such as radioimmunoassays, surface plasmon resonance or enzyme-based solid-phase immunoassays. The neutralizing capacity of these antibodies is assessed using functional cell-based bioassays or inhibition assays (Shankar et al., 2007).

An initial sensitive screening assay is needed to identify whether samples are positive for ADAs. Subsequent tests may include quantification of these antibodies, confirmation of positives by spiking drug into the sample, and isotyping in order to specifically distinguish between various immunoglobulin subclasses. Sensitivity, reproducibility, precision and recovery are important requirements, which need to be considered in the context of the nature of the drug, the use of the assay and the stage of product development - preclinical or clinical (Mire-Sluis et al., 2004).

The challenges of developing optimized and validated assays are intensified for the class of fully human monoclonal antibodies due to the high excess of human antibodies in serum in combination with the relatively low immune response expected. Consequently, preclinical and clinical development assays for these antibody drugs require highly specific as well as highly sensitive detection reagents to measure their pharmacokinetics and immune responses in human subjects.

When a human or humanized antibody drug is administered into a patient, the drug becomes hidden within the high concentration of very similar antibodies in human serum. Typically, the concentration of the antibody drug can be a million times lower than the serum antibody concentration making the drug difficult to detect and quantify. In order to measure drug levels with a pharmacokinetic (PK) assay, highly specific and highly sensitive reagents are needed that bind to the drug but not to the vast excess of similar immunoglobulin molecules.

A well-designed immune response (IR), or ADA, assay requires a surrogate positive control or reference standard against which to measure an anti-drug response, and for the clinical phases of development it should ideally be one or more fully human antibodies with varying affinities and/or varying immunoglobulin subclasses in order to reflect the natural immune response.

Because most therapeutic monoclonal antibodies developed today are human or humanized, the most likely immunogenic epitopes for the induction of ADAs lie within the hypervariable, complementarity determining regions (CDR) that provide the majority of the binding contacts. The idiotype represents the variable part of an antibody including the unique antigen binding site, and the combination of epitopes within the idiotype (i.e. the idiotopes) is unique for each antibody. When one antibody binds to one idiotope of another antibody it is referred to as an anti-idiotypic antibody.

An anti-idiotypic antibody can be generated to bind specifically to one unique antibody drug. This highly specialized antibody can be used in a PK assay to measure the drug level in patient samples and as a surrogate positive control or reference standard in any ADA assay (Figure 1). Traditional sources of such PK and ADA assay antibodies include rodent monoclonal anti-idiotypic antibodies and primate polyclonal serum. More recently, phage display-derived recombinant human monoclonal antibodies have been found to be equally effective for these applications.

Generation of an anti-idiotypic antibody using classic hybridoma technology results in a murine or rat monoclonal reagent. Conversion of this to a pseudohuman reference by molecular cloning and chimerization is possible but laborious and in the end not entirely matching. Moreover, these antibodies tend to be of high affinity due to hyperimmunization, and therefore may be poor models of clinical responses, which are, in the case of an early immune response, likely to be of more modest affinity. As a reference standard for an ADA assay, primate polyclonal serum has traditionally been an option, though success of the immunization protocol is not guaranteed and there are ethical considerations for the use of these animals. An alternative source of ADA reference standard is human sera from early clinical trials. However, obtaining material consistently and in the required quantity and quality is challenging, and requires that the assay validation process is continual throughout the clinical development stage.

Overcoming the Limitations of Traditional Methods

Significant advances in genetic engineering have made it possible to create recombinant monoclonal antibodies using sophisticated antibody libraries and well-tested phage display technology. Such methods overcome the unpredictability and inflexibility of traditional hybridoma technology, and offer significant advantages for generating highly specific and sensitive assays for the drug development process.

Recombinant monoclonal antibodies are comparable to traditional monoclonal antibodies in their functionality. However, since they are generated using fully in vitro processes, they offer greater flexibility during their production and more opportunities for optimization. They have an established track record in the development of human therapeutics and in various research settings.

Recombinant monoclonal antibodies are generated from highly advanced libraries of antibody genes that have been specifically created by de novo synthesis to represent the structural diversity of the human antibody repertoire, and have been optimized for expression in E. coli.

Critically, for anti-idiotypic antibody generation, guided selection is carried out on the drug in the presence of isotype subclass-matched antibodies as blockers, to avoid enrichment of specificities that bind to other regions of the antibody drug and to ensure idiotope specificity. Selection performed in the presence of human serum avoids matrix effects in the final assay. To represent the variation in human responses to a drug, using phage-display technology a panel of anti-idiotypic antibodies that have high and low affinity to the target antibody can be selected.

The guided selection method also allows isolation of rare specificities, such as drug-target complex binders that can be used to quantify bound drug, as opposed to free drug levels (Figure 2, Type 3). These complex-specific antibodies bind neither the antibody drug nor the drug target when on their own, and thus can be used to detect bound therapeutic antibodies directly. The type 3 antibody can be used in an antigen capture assay, which has fewer steps than a bridging assay (Figure 1B). It is particularly useful when the bridging assay is not applicable, for example, when the biotherapeutic is a monovalent antibody fragment, and can result in a more sensitive and robust assay.

In addition to the inhibitory (Figure 2, Type 1) and complex-specific antibodies, specialized selection strategies enable the generation of an antibody that binds to an idiotope outside the antigen binding site of the drug (Figure 2, Type 2). This antibody is not inhibitory and can be used to detect both free and bound drug in serum. Using a combination of the different types of drug-specific antibodies offers the assay developer enhanced flexibility and better overall information about the availability and the state of the drug antibody.

Recombinant phage-display technology was used to generate anti-idiotypic antibodies to the monoclonal antibodies to human IL-6 and IL-13 to act as robust and highly selective detection and reference reagents for PK and ADA assays (Tornetta et al., 2007). The anti-idiotypic antibodies were selected in the presence of human serum and a framework matched antibody to ensure CDR binding exclusivity. The resulting panel of high affinity, fully human antibodies satisfied the developers desired parameters for their preclinical and clinical assays, with the added benefit of a secure, consistent and long-term supply.

The humanized monoclonal antibody drug natalizumab has isotype IgG4 and undergoes half-antibody exchange in vivo with other antibodies of the same isotype, randomizing the Fab arms. The result is molecules made up of one drug heavy-light chain pair coupled to a heavy-light chain pair of unknown specificity. This causes a challenge when trying to quantitate levels of intact drug. The successful strategy involved the design of two ELISAs, which employed antibodies selected from a panel of anti-idiotypic antibodies generated using phage-display technology. One ELISA measured total antibody drug including intact and exchanged molecules, the second measured only intact antibody drug. The anti-idiotypic antibodies were utilized instead of the antigen to capture antibody drug. Validation experiments showed that the assays were specific, accurate and precise, and the strategy has enabled full assessment of levels of the drug in vivo (Shapiro et al., 2011).

Accurate drug level monitoring using PK assays, and immunogenicity assessment through identification of ADA responses, are of major importance to biotherapeutic developers. The data from these studies forms a critical part of the evaluation for regulatory approval. Methods for detecting and monitoring biologic drugs and ADAs require rigorous optimization and validation, and demand reagents and controls with high specificity and sensitivity, particularly when the drug is a monoclonal antibody.

Anti-idiotypic antibodies have specific applications in the field of therapeutic antibody development and drug monitoring. Generation of these antibodies using antibody libraries and phage-display technology produces fully human antibodies with superior binding specificity that can be used in assays for both early and late stage development, avoiding continual assay validation. The in vitro production method confers consistency of reproduction and a guaranteed long-term supply, allowing faster optimization of PK and ADA assays, and effective management of the resources and costs associated with the complex assay development process.