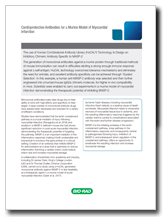 Cardioprotective Antibodies for a Murine Model of Myocardial Infarction

The generation of monoclonal antibodies against a murine protein through traditional methods of mouse immunization can result in difficulties eliciting a strong enough immune response against a self-antigen. HuCAL technology overcomes tolerance mechanisms and eliminates the need for animals; excellent antibody specificity can be achieved through ‘Guided Selection’. In this example, a human anti-rodent MASP-2 antibody was selected and then further engineered into a human/mouse IgG2a chimeric molecule, for in vivo studies in mice. This enabled scientists to carry out target validation studies in a multitude of disease models, including a mouse model of myocardial infarction, demonstrating the therapeutic potential of inhibiting MASP-2.

Monoclonal antibodies make ideal drugs due to their ability to bind with high affinity and specificity to their target. A large number of monoclonal antibody drugs have already been developed and licensed for a variety of different conditions.

Studies have demonstrated that the lectin complement pathway is a crucial mediator of injury following myocardial infarction (Panagiotou et al. 2018) and studies in a MASP-2 deficient mouse line, which cannot activate the lectin complement pathway, have shown significant reduction in post-acute myocardial infarction (Schwaeble et al. 2011), demonstrating the therapeutic potential of targeting this pathway. Creation of an antibody that inhibits MASP-2 for administration at a dose that is optimized to block lectin pathway activation and reduce lectin pathway-mediated inflammation following a cardiac event, could reduce infarct size and increase myocardial salvage.

Ischemic heart disease, including myocardial infarction (heart attack), is a leading cause of death worldwide. Myocardial infarction leads to irreversible necrosis of myocardial tissue due to ischemia, and the resulting inflammatory response triggered by the cardiac event is central to complications associated with the event and further disease progression.

MASP-2 is the initiating protease of the lectin complement pathway, a key pathway in the inflammatory response to tissue injury, and consequently central to the pathogenesis of inflammatory tissue injury. Inhibition of MASP-2, and subsequent down-regulation of the complement pathway, offers an opportunity to ameliorate the resulting infarction and increase myocardial salvage.

The structural diversity of the human antibody repertoire is represented in the HuCAL PLATINUM® library by seven heavy chain and six light chain variable region genes, which give rise to 42 master frameworks. Highly diverse genetic cassettes, encoding the complementarity determining regions (CDRs) of the antibody binding sites, are combined with these frameworks to create antibody genes that code for some 45 billion unique antibodies in Fab format (Knappik et al. 2000; Prassler et al. 2011).

The screening of the HuCAL library is performed in vitro enabling the successful selection of antibodies that it is not possible to generate by in vivo immunization of animals; such challenging targets include highly conserved or self-antigens, low immunogenic antigens and conformational variants. An additional benefit of in vitro selection is the direct access to the genetic information of the antibody, which enables a fast conversion of the original Fab antibody into a large number of different formats, including full length antibodies of different isotypes. As the sequence of any selected antibody is known, it is possible to reproduce the genes synthetically if needed. This sequence back up secures the future supply of the antibody, and recombinant production methods ensure there is a high level of consistency between batches.

HuCAL technology is proven and well published, and has been used by the Bio-Rad custom antibody team to generate antibodies for research and diagnostic applications since 2004.

The Bio-Rad team ‘panned’ the library for antibodies with specificity to recombinant rat MASP-2, which has high homology to the mouse protein. They used a technique called phage display blocking to identify and select phages and isolate the genes for antibodies with specificity for MASP-2 (Figure 1). Blocking was performed with milk and bovine serum albumin (BSA). Unbound and blocked phages were removed by extensive washing; the bound phages were eluted for further rounds of panning under the same blocking conditions. This ensured that only phages displaying antibodies that recognize MASP-2 were isolated for screening, sequencing, and later production in E. coli.

Antibody Reformatting for In Vivo Studies in Mice

After initial testing of antibodies in F(ab)2 format to select the antibody with the best inhibitory activity, the human Fab was subcloned into the pMORPH2_h/m_Ig vector series for human/mouse IgG2a. These vectors contain the mouse gamma 2a constant region, or the mouse lambda constant region. The resulting human/mouse chimeric molecule contained the human Fv comprising the antigen binding site fused to murine constant Ig2a and lambda regions, suitable for in vivo studies in mice.

In order to determine a dosing regimen for the infarction study, the anti-MASP-2 antibody, clone AbD04211, was administered in mice and lectin pathway inhibitory activity was assessed on a C4 deposition assay. A single dose of 1.0 mg/kg i.p was effective in inhibiting lectin pathway-dependent C4 deposition below the detection threshold of the assay for up to 1 week post-treatment (Figure 2). 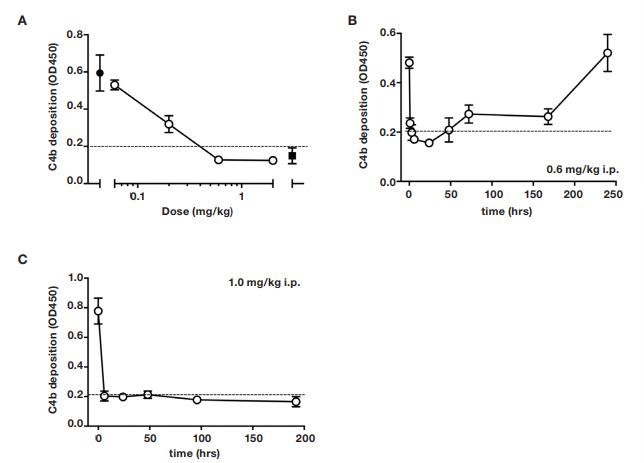 The team of researchers injected mice with anti-MASP-2 antibody or control prior to experimental infarction by ligation of the left anterior coronary artery for 30 minutes, resulting in ischemia, followed by 120 minutes reperfusion in vivo. Infarcts were significantly smaller in the anti-MASP-2 antibody treated group compared with the control isotype group and vehicle treated group (Figure 3). 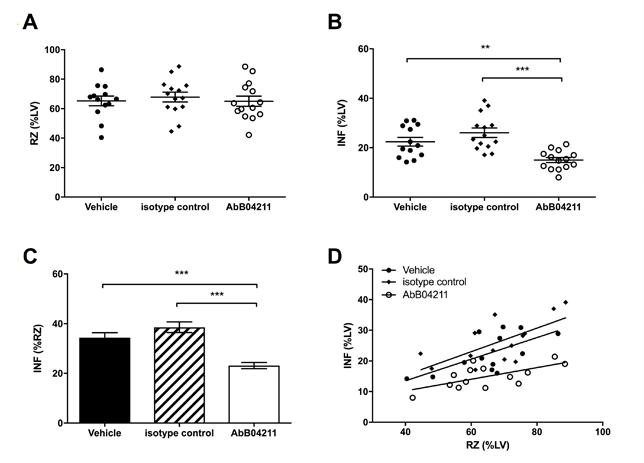 Fig. 3. Infarct and risk zone (RZ) assessments.  Mice were subjected to 30 min ischaemia followed by 120 min reperfusion in vivo. RZ, infarct size (INF) and left ventricle (LV) size were measured by Evans blue and tetrazolium staining. (A) RZs determined in mice pretreated with vehicle (PBS), isotype control Ab or AbD04211; (B) INF as a percentage of LV mass and (C) INF as a percentage of RZ in the three groups. (D) INF versus RZ in all the experimental mice. Data are presented as total area at risk and INF as a percentage of LV volume. Results are mean ±SD of 13-15 independent experiments. **P<0.01; ***P<0.005 as indicated.

As demonstrated in this study, treatment with an anti-MASP-2 antibody blocking the lectin pathway of complement pathway, reduces the resulting infarction size and increases myocardial salvage.

This validation of MASP-2 as a feasible, druggable target provided important proof-of-concept data supporting the development of OMS721, a fully human monoclonal antibody against MASP-2 generated by the pharmaceutical company Omeros Corporation, independently of Bio-Rad and AbD04211. Omeros holds worldwide exclusive licenses to rights related to MASP-2, inhibitors targeting MASP-2, and the therapeutic applications for these inhibitors.

OMS721 is currently being tested in a number of clinical trials to evaluate its efficacy and safety in patients with disorders associated with lectin pathway activation. These diseases are characterized by significant tissue injury and pathology and include disorders such as thrombotic microangiopathies and complement-associated renal diseases.