A central regulator of cell metabolism, growth, proliferation, and survival 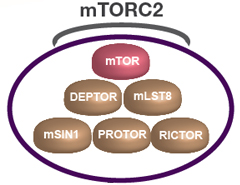 The mammalian target of rapamycin (mTOR) is a serine/threonine kinase, which forms the core component of mTOR complex 1 (mTORC1) and mTOR complex 2 (mTORC2) (Bhat et al. 2015) (Figure 1). The complexes differ structurally and functionally, and have different sensitivity to the macrolide rapamycin.

One key role for mTOR is that of a negative regulator of autophagy (Mizushima et al. 2008). mTORC1 regulates this process by phosphorylation and suppression of the ULK-Atg13-FIP200 kinase complex, which is an essential mediator of autophagy. Inhibition of mTORC1 leads to autophagosome formation, which subsequently fuses with lysosomes (Jung et al. 2009; Laplante and Sabatini 2012). The death-associated protein 1 (DAP1) is also an mTOR substrate that negatively regulates autophagy (Koren et al. 2010).

Inhibition of mTORC1 kinase activity causes reduction in DAP1 phosphorylation, and converts the protein into an active suppressor of autophagy (Koren et al. 2010).

Information about the importance of the complex in the regulation of protein synthesis can be found on our translation factors page. 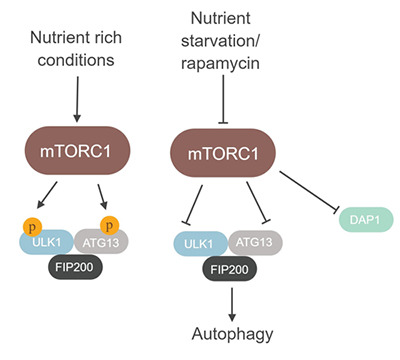 Mutations in the mTOR signaling pathway as well as aberrant mTOR signaling have been associated with the development of many diseases including cancer (Populo et al. 2012). Therefore, mTOR represents an attractive therapeutic target (Bhat et al. 2015). Many mTOR inhibitors are licenced FDA-approved drugs and many more are currently being tested in clinical trials.

We have compiled key antibodies involved in the mTOR signaling pathway into one handy poster you can download for your reference. Browse our range of antibodies against targets involved with mTOR signaling below. Please use the filters to sort the attributes in the table below in order to find the antibody that fits your exact requirements. If you need any further assistance please do not hesitate to contact us.