The phosphoinositide 3-kinase (PI3K)/protein kinase B (AKT) pathway controls apoptosis, cell proliferation, and the cell cycle (Rodon et al. 2013). The serine/threonine kinase AKT is a downstream effector of phosphatidylinositol 3-OH kinase (PI3K) (Burgering and Coffer 1995). Extracellular signals activate PI3K to generate phosphatidylinositol 3′ phosphate (PIP3). The tumor suppressor PTEN is a major negative regulator of the pathway by dephoshorylating the 3’phosphate of PIP3 (Sulis and Parsons 2003). AKT has a PH domain at the N-terminus which is required for the binding of PIP3 (Bhaskar and Hay 2007) (Figure 1). In mammals, there are three AKT isoforms (AKT1, AKT2, and AKT3). Phosphorylation of Thr308 and Ser473 are required for full activation of AKT1. Thr308 phosphorylation is mediated by phosphoinositide-dependent kinase-1 (PDK1) (Vanhaesebroeck and Alessi 2000), whereas Ser473 is phosphorylated by the mammalian target of rapamycin complex 2 (mTORC2) (Sarbassov et al. 2005, Laplante and Sabatini 2012) (Figure 1). AKT activity is inhibited by dephosphorylation by phosphatases including protein phosphatase type 2A (PP2A) (Millward et al. 1999) and pleckstrin homology domain leucine-rich repeat protein phosphatase (PHLPP) (Brognard et al. 2007).

Dysfunction of the pathway has been implicated in various pathological conditions including cancer, cardiovascular disease, type 2 diabetes, and autoimmune and neurological disorders (Manning and Toker 2017). Dissecting the complexity of PI3K/AKT signaling offers valuable insights into the development of novel therapeutics for treatment of various disorders.

We have compiled key antibodies involved in the PI3K/AKT signaling pathway into one handy poster you can download for your reference. 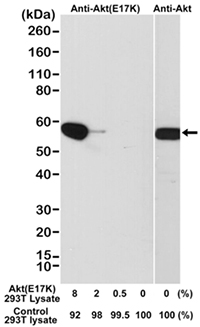 Browse Bio-Rad’s range of antibodies against targets involved in the PI3K/AKT pathway below. Please use the filters to sort the attributes in the table below in order to find the antibody that fits your exact requirements. If you need any further assistance, please do not hesitate to contact us.