Antibodies for the Analysis of Phosphatases 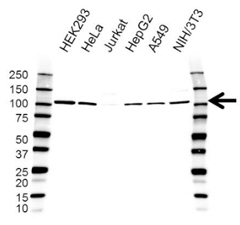 During a phosphorylation reaction, a member of the kinase protein family adds a phosphate group to a serine, threonine or tyrosine residue of a target protein. This process can be reversed by another group of enzymes called phosphatases. Phosphatases can be classified into three groups: Ser/Thr phosphatases, Tyr phosphatases (PTP) and Asp-based protein phosphatases (Moorhead et al. 2007).

The activity of phosphatases can be regulated by other post-translational modifications, such as SUMOylation. An example is the SUMOylation of the protein-tyrosine phosphatase 1B (PTP1B) which has been reported to result in a reduction of its catalytic activity (Dadke et al. 2007).

Signaling of specific kinases, such as GSK3, can be inhibited with the help of kinase inhibitors (Cohen and Goedert 2004). Many kinase inhibitors have been successfully used for the treatment of various diseases, including cancer. When searching for the optimal kinase inhibitor for your experiment, we recommend you consult dedicated websites, like the "Kinase Inhibitor Database" hosted on the website of the “International Centre for Kinase Profiling”. In contrast to kinase inhibitors, phosphatase inhibitors like okadaic acid and microcystin act rather broadly by inhibiting entire phosphatase families. Due to this, phosphatases have been relatively neglected as potential therapeutic targets, although many are known biomarkers. For example, prostatic acid phosphatase (PAP) was one of the first identified tumor markers and used in clinical diagnostics for over 50 years for prostate cancer screening and staging (Mayo Clinic). It was replaced as the marker of choice in the 1980s by serum prostate specific antigen (PSA) (Taira et al. 2007).

Recent advances in the understanding of phosphatases have highlighted phosphatases as critical growth-regulatory molecules that represent a new class of therapeutic targets.

For your convenience, we have grouped our research reagents into the main phosphatase families: