Phosphorylation, the addition of a phosphate group to serine, threonine or tyrosine residues, is an important cellular process utilized to send cellular signals from the membrane to the nucleus. For example, changes in physiological conditions may require immediate changes in gene expression. These reversible phosphorylation events are performed by a family of proteins known as kinases, whose activity in return is counteracted by another protein family called phosphatases.

Phosphorylation may result in conformational changes that trigger the activation or inactivation of an enzyme. The latter scenario is well documented for glycogen synthase kinase-3 beta (GSK3 beta), which upon phosphorylation by Protein Kinase B (PKB/AKT1) on serine 9 becomes inactivated (Doble and Woodgett 2003). In most cases, the interactions of kinases with their substrates are highly transient and therefore challenging to study. 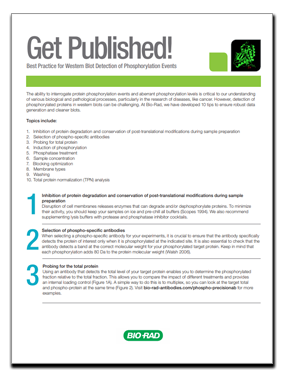 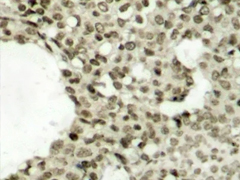 Proteins containing Src homology 2 (SH2) domains on the other hand bind to phosphotyrosine motifs (Schlessinger and Lemmon 2003). A well-studied group of SH2 domain containing proteins are Signal Transducers and Activators of Transcription (STATs), which upon tyrosine phosphorylation by Janus kinases (Jaks) form homo- or heterodimers. Once dimerized, STATs translocate from the cytoplasm to the nucleus, where they act as transcription factors (Rawlings et al. 2004). Changes in subcellular localization are a commonly observed phenomenon in response to phosphorylation.

Certain phosphorylation events are also characteristic of the activation of specific cell signaling pathways or cellular processes. For example, phosphorylation of the histone H2AX by the kinase ATM (Ataxia telangiectasia mutated) on serine 139, indicates the existence of DNA double strand breaks, the most toxic of all DNA lesions, which occurs in response to chemotherapy (Burma et al. 2001).

Bio-Rad offers a variety of antibodies for the detection of phosphoproteins by ELISA, immunofluorescence, immunohistochemistry and western blotting.