Immunophenotyping of B Cells by Flow Cytometry

B lymphocytes along with T lymphocytes form the adaptive immune system. They are a heterogeneous population of cells with unique functional properties. Their primary function is to produce antibodies, however they can also be professional antigen presenting cells to T lymphocytes helping to generate an effective immune response. Abnormal B cell development or function can result in several autoimmune diseases and malignancies, and their identification can be critical for disease treatment and detection of residual disease.

B cell subsets can be difficult to identify due to variability and low level expression of markers and the rarity of some populations. This guide to immunophenotyping of human B cells takes you through some of the common markers and gating strategies used to identify B cells by flow cytometry, with examples of data acquired on the ZE5™ Cell Analyzer.

The first marker to be identified, using monoclonal antibodies specific for B cells, was B1, now known as CD20. However the key marker for identification of human B cells is CD19, which is expressed by virtually all B cell lineages (in mouse the key pan B cell marker is CD45R, also known as B220, and in rat it is CD45RA). With the addition of more markers, such as CD27, CD24, CD38 and surface immunoglobulin, specific blood subsets such as naïve, memory and transitional B cells can be identified. Additional markers allow identification of secondary lymphoid organ B cell populations, for instance CD24 and CD21, for marginal zone B cells, and CD69, CD80 and CD86 for activation status. For more information on B cell lineage markers, function and activation, including all our antibodies useful for identification of B cells please go to our dedicated B cell page.

Successful flow cytometry panel building relies on careful planning prior to staining. This includes careful sample prep, knowing the biology of your sample, understanding your flow cytometer configuration and performing the right controls.

To identify peripheral blood B cell subsets, markers were first identified from the literature which would allow the identification of specific B cell subsets including naïve, memory, class switched and non-class switched, transitional B cells and plasmablasts. A list of the antibodies used can be found in Table 1.

The appropriate controls for this multicolor flow cytometry experiment include an unstained sample to look at autofluorescence, single stained samples to allow compensation data to be generated, isotype controls to check for non-specific background staining and FMO controls to account for spreading of the data. In addition, the Fc receptors found on B cells were blocked using human serum and a viability dye was included to allow removal of dead cells. The FMO controls for CD24PE are shown in Figure 1 below.

Fig. 1. CD24 PE FMO controls. Cells were stained with all antibodies in the panel minus CD24 PE (MCA1379PE) which was replaced by an isotype control. This allowed us to confirm the CD24 positive cells in the final stain was not due to fluorescence spread.

Instrument configuration can affect the availability of fluorophores which can be used in a multicolor panel. The ZE5 Cell Analyzer has five lasers and 27 fluorescent parameters allowing the fluorophores used to spread across the lasers and filters to minimize fluorescence spillover where possible. In addition the spectra viewer included in the software allows users to visualize any potential conflicts between fluorophores, see Figure 2. Furthermore abundant markers, such as CD19, were placed on a relatively dim fluorophore to allow better resolution of less abundant markers with bright fluorophores. 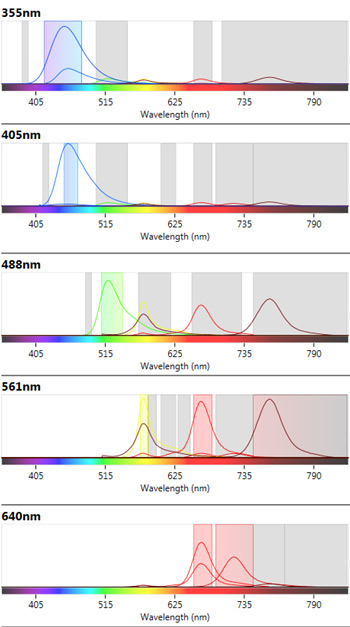 To further increase our resolution, we included a dump channel. This included CD3, CD14 and CD56 all stained with antibodies conjugated to A700. This allowed cells positive for those markers to be excluded from the analysis. The cells to be stained were as fresh as possible and kept under conditions likely to maintain cell health. The staining protocol was optimized by titrating all the antibodies to the point where they gave the optimal stain index, which is the difference between the positive and negative population mean fluorescence intensity.

The frequency of B cells in human peripheral blood is 3-10% with some subsets, such as memory B cells, representing only a small fraction of this population. Therefore we acquired 1.2 x 106 cells to ensure we could visualize and accurately gate all the relevant populations.

A list of the markers, fluorophores selected and the antibody titration data is shown below in Table 1.

We have comprehensive resources on multicolor panel building and flow cytometry. Click on the links below for more in-depth information on each topic and view our popular flow cytometry basics guide.

An initial basic gating strategy was used to identify B cells and to exclude dead and doublets collected during acquisition. Furthermore the use of a dump channel allowed the exclusion of T cells, NK cells and monocytes, as seen in Figure 3. 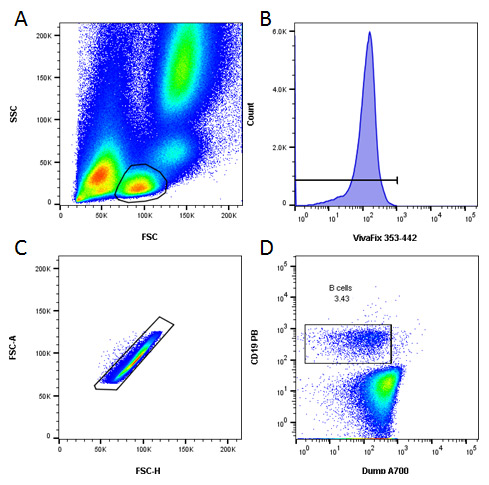 Identification of specific subsets was performed by further sequential gating based upon surface expression of various markers, as shown in Figure 4, allowing identification of naïve and memory cells, class switched and non-class switched memory B cells, transitional B cells and plasmablasts. The importance of acquiring a large data set can be seen by the very low number of plasmablasts which make up less than 0.01% of the total cells acquired and only 0.1% of all B cells. 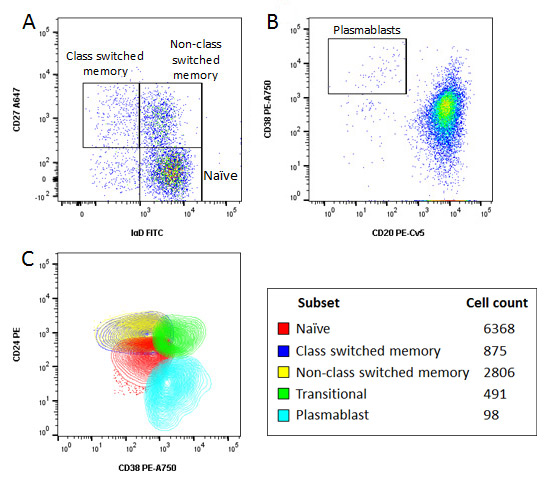 Using an eight color panel we have successfully identified several B cell subsets in human peripheral blood. For more information on B cell subsets, lineage and maturation markers for human and mouse, go to our dedicated B cell page.

In addition to antibodies to detect B cells, we have over 4,000 antibodies validated for flow cytometry enabling you to identify the cells shown here and more. To find out more about our antibodies, antibody cocktails, kits and isotype controls go to our dedicated flow cytometry page.