Bio-Rad offers a wide range of antibodies conjugated to all of the most commonly used fluorescent dyes and to our new proprietary StarBright Dyes, bright dyes specifically designed for flow cytometry. We also offer Alexa Fluor and DyLight conjugates in an array of colors, both with outstanding spectral properties, suitable for use in flow cytometry, fluorescence microscopy, and fluorescent western blotting. 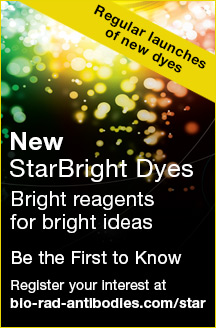 Not all fluorophores are suitable for every antibody based application. For example, even though PE is bright, it is easily bleached and therefore is not suitable for fluorescence imaging.

Due to the increase in the size of flow cytometry panels, conventional flow cytometry requires bright fluorophores that have a specific excitation and emission wavelength from one laser. Spectral flow cytometry however requires unique spectral profiles to allow unmixing in panels. These fluorophores must be compatible with each other in the panel and ideally should be photostable and show no loss of fluorescence when fixed.

When designing panels of eight or more colors, tandem dyes, such as APC-Cy7, have to be included. This is due to both laser excitation and single fluorophore limitations, which make it necessary for a single laser to excite the maximum number of fluorophores possible.

Tandem dyes, as the name implies, consist of two different covalently attached fluorophores (a donor and an acceptor molecule). With regards to spectral properties, the tandem dye has the excitation characteristics of the donor fluorophores and the emission characteristics of the acceptor molecule. These properties are due to Förster resonance energy transfer (FRET; also known as fluorescence resonance energy transfer); a process in which energy is passed on from an excited donor to a nearby acceptor molecule, which then emits a photon of light.

For tandem dyes the following guidelines should be followed:

Although some fluorophores may have similar excitation and emission wavelengths, their relative brightness may be different. Fluorophore brightness depends on how many photons a fluorophore emits when being excited by a laser, as well as the conversion rate of those photons when they hit the detectors and are converted into electrons. The relative brightness can be an important factor in flow cytometry to obtain good signal resolution. If an antigen is highly abundant, most fluorophores can be used, however low abundance antigens and rare cell populations will require bright fluorophores to achieve sufficient separation from the negative population. When building larger panels, good separation will improve the analysis of your data and may allow you some leeway in your fluorophore choices. The graphs below show how fluorophore brightness can affect the appearance of flow cytometry data.

Many factors will affect the appearance of data. This can be the flow cytometer, filters and laser used to excite the fluorophore, the laser power and instrument settings as well as the type of plot chosen. Other examples include the sample used, antibody clone, the F:P ratio and staining protocol. Finally, remember that each fluorophore will influence another in a multicolor panel so compensation and fluorescence spread should be considered when choosing a fluorophore.

For more information about fluorophores and immunophenotyping, refer to our flow cytometry resources.