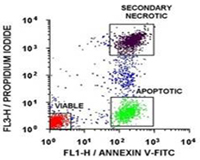 Labeled annexin V, included in the kits, has been conjugated to allow the native phospholipid binding properties of annexin V to remain unaltered. 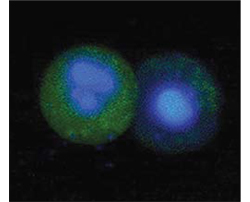 Caspases are cysteine proteases that can cleave other proteins, and upon activation, create a positive-feedback cascade, which ensures the cell will undergo apoptosis.

Our Caspase FLICA Apoptosis Detection Kits allow analysis of active caspases in whole, live cells. Their methodology is based on a unique cell-permeable and non-cytotoxic reagent called the Fluorochrome Inhibitor of Caspases (FLICA). The reagent contains a caspase inhibitor sequence (such as VAD) linked to a green (carboxyfluorescein, FAM) or red (sulforhodamine, SR) fluorescent probe. 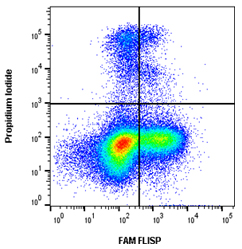 Fig. 3. Jurkat cells were stained using the FLISP Serine Protease Assay Kit (APO009) and treated with staurosporine to induce apoptosis. Apoptotic cells positive for serine protease activity can be seen in the bottom right quadrant and dead cells positive for both serine protease and PI in the top right quadrant. Healthy cells are negative for both stains. Data acquired on the ZE5 Cell Analyzer.

Serine protease activation plays major roles in apoptosis, tumor malignancy, and as diagnostic indicators of breast, head, and neck carcinomas. They are also thought to play a role in infections and transplant rejection. 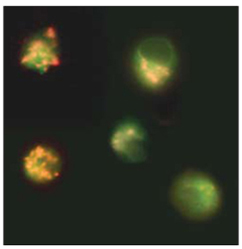 The JC-1, TMRE and TMRM MitoPT Kits allow clear differentiation between non-apoptotic and apoptotic cells through the simple and reproducible detection of the mitochondrial membrane permeability transition event.

An early indication of apoptosis involves a collapse in the electrochemical gradient across the mitochondrial membrane.

Bio-Rad’s Green and Magic Red Kits for analysis of active cathepsins in whole, live cells, utilize a substrate based assay. These kits enable the detection of active cathepsins contained in lysosomes, which are involved in the autophagy pathway and phagocytosis. When released into the cytoplasm, they can regulate both the apoptosis extrinsic and intrinsic pathways. 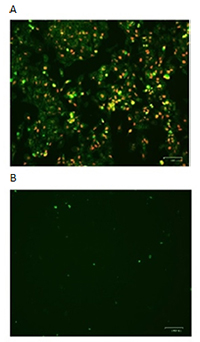 Visualize apoptosis events in real time with our pSIVA Real-Time Apoptosis Fluorescent Microscopy and Flow Cytometry Kits. pSIVA only fluoresces when bound to phosphatidylserine (PS), which becomes exposed at the outer plasma membrane as one of the early events of apoptosis.

The pSIVA probe is conjugated to IANBD, a green emitting dye with spectral properties similar to FITC. No washing steps are required; simply add the probe to your cells and start visualizing apoptosis in real time.

Our range also includes antibodies to detect and measure markers of apoptosis.

Markers of apoptosis include the presence of annexin V on the cell surface, intracellular caspases and cytochrome c, death receptors and anti-apoptotic markers of the Bcl-2 family.