Do you know all the pathways?

The evolutionary conserved autophagy process is under renewed research interest with the discovery of the ATG gene products and the link between autophagy and aging as well as human diseases. A suggested role for autophagy in programmed cell death and cell cycle progression along with further elucidation of the autophagy mechanisms and their regulation are also under investigation.

We offer a selection of autophagy related antibodies and cathepsin detection kits, all performance guaranteed in many popular applications, for the study of upstream events, autophagy pathways and lysosome detection. 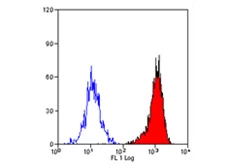 Macroautophagy is the most studied pathway involving the cellular degradation of cytoplasmic proteins, bulk cytoplasm, dysfunctional organelles and intracellular pathogens (innate immunity / cell defense mechanism). This process involves the formation of a phagophore which develops into a transport vesicle called the autophagosome containing the cytoplasmic constituents or organelles.

A popular method for detecting autophagy uses antibodies specific to LC3 to identify LC3-positive structures such as autophagosomes. Since LC3 is the only protein identified on the inner and outer membranes of autophagosomes, MAP1LC3A/B antibodies provide a quick detection method.

Click here to learn more about our LC3 antibody, which shows superior results in western blotting. 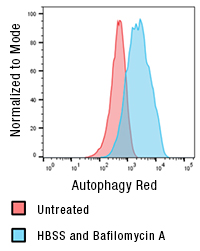 Fig. 4. Detection of autophagy using Autophagy Probe Red. Starvation was used to induce autophagy. Untreated cells (red) and cells incubated in HBSS for 2 hr and 10 nM bafilomycin A for 2 hr (blue). After staining with Autophagy Probe Red for 30 min, cells were washed and analyzed on the ZE5 Cell Analyzer using the 561 mm laser and 640/20 filter.

Autophagy Probe Red is a cell-permeant, aliphatic molecule that fluoresces brightly when inserted into the lipid membranes of autophagosomes and autolysosomes. Autophagy is a dynamic process typically divided into three stages. During stage one, cytoplasmic components targeted for degradation are sequestered within a double-membrane phagopore (also called the isolation membrane).

Autophagy Probe Red can be readily detected in cells undergoing autophagy quickly and easily by flow cytometry, with optimal excitation at 590 nm and peak emission at 620 nm (ZE5 Cell Analyzer settings: 561 nm laser and 615/24 or 640/20 filter).

The autophagosome fuses to a lysosome forming an autolysosome where enzymes, like cathepsins and permeases, hydrolyze and degrade the cargo for its release back into the cytoplasm for recycling.

Our Cathepsin B, K and L Detection Kits are available in Green and Magic Red and are suitable for the detection of lysosomes:

Bio-Rad offers a range of Cathepsin Antibodies and Detection Kits; further details can be found here. Future detailed understanding of autophagy mechanisms and their role in human disease and innate and adaptive immunity is needed, before potential therapeutic intervention can be developed.

Autophagy is thought to be closely linked to apoptosis - take a look at our range of apoptosis antibodies and kits.