Analyze Active Caspases in Apoptotic Cells with our FLICA™ Kits 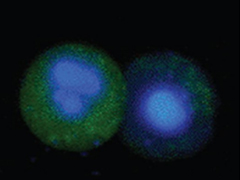 Apoptosis, a form of programed cell death, is directed by activated caspases. Caspases are cysteine proteases that can cleave other proteins, and upon activation, create a positive-feedback cascade, which ensures the cell will undergo apoptosis.

Our FLICA Caspase Apoptosis Detection Kits allow analysis of active caspases in whole, living cells. Their methodology is based on a unique cell-permeable and non-cytotoxic reagent called the Fluorochrome Inhibitor of Caspases (FLICA). The reagent contains a caspase inhibitor sequence (such as VAD) linked to a green (carboxyfluorescein, FAM) or red (sulforhodamine, SR) fluorescent probe.

FLICA Caspase Kits are suitable for cells in suspension, adherent cells, thin tissue sections, and thin frozen sections (but not fixed or paraffin-embedded tissues) from many species including mammals, insects and yeast. Different cell types e.g. HeLa, primary neurons, macrophages and lymphocytes have been successfully studied with these kits.

NOTE: All these kits may also be used with fluorescence plate readers.

View the other sections in our quality apoptosis antibodies and kits product range: