While the genome contains roughly 25,000 protein-coding genes, the proteome contains roughly 1,000,000 proteins. Post-translational modification (PTM) is one of the mechanisms which allows the huge functional expansion from the genome to the proteome, allowing each translated protein to act in diverse ways, at specific times, and in specific cells and tissues (Horita et al. 2017). This expansion creates the range of function required for tight control of the cellular signaling pathways which sustain life.

PTM commonly involves the modification of amino acid side chains on proteins by addition or deletion of specific chemical groups. For example, phosphorylation involves the addition of a phosphoryl group, acetylation adds an acetyl group, and methylation adds a methyl group (Wang et al. 2014). These processes are frequently reversible, allowing a protein to become phosphorylated and dephosphorylated multiple times over its life cycle, for example (Ramazi and Zahiri, 2021).

Phosphorylation is regarded as the most common post-translational modification and is very widely studied, so provides a good example of the power of PTM. PTMs including phosphorylation occur at distinct amino acids; for example, phosphorylation most commonly occurs on serine, threonine, and tyrosine chains. On a protein regulated by phosphorylation, such as epidermal growth factor receptor (EGF R), specific sites can be phosphorylated by specific upstream activators and with known effects. In the cytoplasmic domain of EGF R, phosphorylation of tyrosine 845 (pTyr845, also known as Y845) by receptor dimerization activates STAT5 signaling downstream.

Accurate detection of protein phosphorylation, among other PTMs, is an important method for discerning the activation status of a protein. This is achieved using phospho-specific antibodies. For example, EGFR phosphorylation at Y845 can be detected using an EGF R pTyr845 antibody, which detects EGF R only when phosphorylated at Y845. 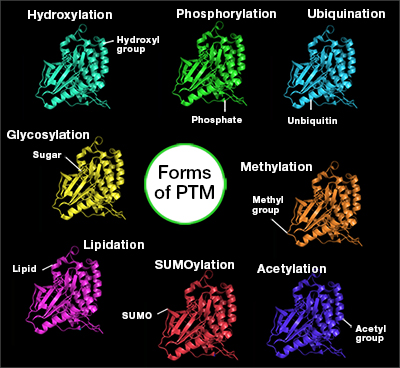 There are many types of PTM that modify proteins in a variety of ways and enable proteins to have functions in metabolism and regulation. Listed below are common PTMs:

Since accurate PTM is important for maintaining diverse biological functions, disruption of PTM can send carefully controlled processes into disarray. PTM disruption is therefore implicated in a wide range of diseases including cancer, heart disease, and neurodegenerative diseases. The study of PTMs is crucial for the development of novel therapies.