A Balancing AKT: the E17K Hotspot Mutation and How It Defines Cancer

AKT is an extremely important kinase in human health, playing an intricate role in coordinating fundamental signaling pathways. However, a “hotspot” mutation, called E17K, can cause constant AKT activation and wreak havoc on cell homeostasis. AKT has been identified as a driver oncogene in many cancer types but the role of E17K isn’t straightforward, with suggestions that patients harboring the mutation can have an improved prognosis. This blog discusses the AKT EK17 mutation and its role in cancer.

It is tempting to think of proteins as messy conglomerates of amino acids, but their shape is remarkably precise. Proteins interact with other molecules and exert their functions thanks to the perfect conservation of their sequence and structure. Mutations that cause alterations in the structure of the translated protein can cause changes in the way that it behaves. This may mean that it becomes permanently “switched on” (a gain of function mutation) or insensitive to signals that regulate it. A premature stop codon can also lead to a truncated protein being produced.

Several regions of DNA are highly susceptible to mutations, for example because they are particularly accessible to mutagens, and are known as mutation hotspots (Clancy 2008).  Hotspots usually reflect some mechanism for increased mutagenesis; for example, many hotspots occur in genes prone to mutation during DNA replication or repair (Nesta et al. 2020). However, not every mutation will lead to devastating consequences as they don’t all impact protein structure. Silent mutations, where a nucleotide is changed without impacting the translated amino acid (like GGA to GGG both of which encode glycine), are also possible.

Some mutations do have significant consequences and are associated with disease development. A mutation hotspot on the 17th amino acid of the gene encoding the protein AKT is a common activating AKT mutation found in a variety of different cancers (Yi and Lauring 2016).

AKT, otherwise known as protein kinase B or PKB, is an extremely important kinase in human health and disease. Its functions have been identified in nearly every human organ system, and accordingly, AKT has been a focus of tens of thousands of research papers (Manning and Toker 2017).

AKT is a serine/threonine kinase involved with the regulation of cell proliferation and transformation, glucose metabolism, and cell survival (Duggal et al. 2018). It represents a crucial signaling node with the ability to control phosphorylation of multiple targets including NF-κB and mTOR (Song et al. 2019). AKT activation is driven by localization to the membrane and phosphorylation. When activated, AKT controls cell growth, survival, and proliferation.

Given the crucial importance of AKT and its role in proliferation and survival, it is unsurprising that its dysregulation can have a catastrophic effect. Various mutations in AKT seem to happen in around 3–5% of human cancers. However, by far, the most common AKT mutation occurs at the 17th amino acid. When the glutamate (E) at this position is switched to a lysine (K), a gain of function mutation occurs. This “E17K” mutation is sufficient to cause AKT to be constantly activated independently of PI3K, the usual activator of AKT (Chen et al. 2020).

Under normal conditions, AKT becomes activated by membrane localization and phosphorylation. The E17K mutation leads to constant activation by allowing pathologic association with the plasma membrane. This in turn leads to inappropriate activation of PI3K, promoting cell migration and oncogenesis (Rudolph et al. 2016). Interestingly, E17K alone is sufficient to cause the proteus syndrome, characterized by overgrowth of skin, connective tissue, and brain, and an increased frequency of tumors (Chen et al. 2020).

The E17K Mutation and Cancer

The simple E17K mutation, causing the substitution of a single amino acid, appears to be an oncogenic driver mutation in many human cancers including some types of breast cancer, colorectal cancer, lung cancer, and ovarian cancer (de Bruin et al. 2017). The oncogenic effect of E17K seems to occur through activation of the PI3K/AKT/mTOR pathway (Wu et al. 2020) and promotes cell survival (Chen et al. 2020).

There has been concern that tumors with the E17K mutation may not be treatable using PI3K inhibitors, because the mutation activates AKT independently of PI3K (Smyth et al. 2021). However, treatment with the AKT inhibitor AZD5363, otherwise known as capivasertib, has led to tumor regression in multiple cancers with that mutation (Hyman et al. 2017).

While some studies have found that E17K drives cancer, the mutation may also hinder it. E17K has even been associated with tumor regression and improved prognosis in cancer patients (Chen et al. 2020). As an example, the overall survival rate of breast cancer patients with the mutation has been found to be higher than those without it. The mutation also inhibits the growth, proliferation, and survival of breast cancer cells (Wu et al. 2020).

E17K appears to play a dual role in cancer with both oncogenic and antitumor functions. It has been suggested that the antitumor effect could occur through negative feedback of the AKT pathway, resulting in reduced protein synthesis and inhibition of the cell cycle (Chen et al. 2020). It has however been suggested that while AKT is a carcinogenic gene, the oncogenic effect of the E17K mutation may not be as clear-cut as expected. One study found that E17K doesn’t appear to contribute much to pathogenesis in nontumorigenic breast cells (Wu et al. 2020).

Additionally, in breast cancer, any tumorigenic role of E17K may be restricted to specific types, including ductal and lobular histotypes. Higher rates of the E17K mutation have been found in benign papilloma than in papillary carcinoma (Rudolph et al. 2016). Clearly, the role of the E17K mutation is complex and context-dependent and necessitates robust tools for studying this interesting and impactful genetic change.

The study of important mutations in cancer research requires the highest-quality reagents. Bio-Rad is pleased to offer an AKT (E17K mutant) Antibody MCA6297 as the first mutation-specific antibody in our catalog. This product has been tested in western blotting using a DNA construct encoding the AKT E17K mutant, for maximum confidence. 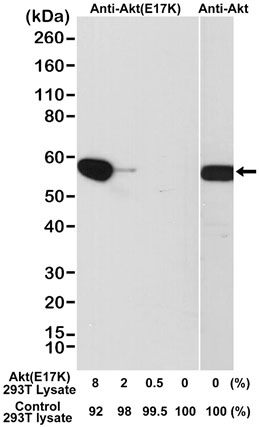