What Is Dengue Virus

The dengue virus (DENV), first isolated in 1943, is assigned to the family Flaviviridae, genus Flavivirus. It has four serotypes (DENV-1, DENV-2, DENV-3, and DENV-4) and transmission to humans occurs via the Aedes mosquito, mainly Aedes aegypti. Its global reach has mirrored the spread of Aedes aegypti in tropical and subtropical areas (Messina et al. 2014). It is suggested that 390 million dengue infections occur per year, of which 96 million develop symptoms (Bhatt et al. 2013).

After being exposed to the virus (of any DENV serotype) through a mosquito bite, an incubation period of 4-7 days follows. Then symptoms tend to be noticed for the next 5 days, but not all infected individuals show signs of illness (Bhatt et al. 2013). This is called dengue fever (DF) and is similar to mild flu-like syndrome. Some hemorrhagic manifestations, such as petechiae, may occur. The next form is dengue hemorrhagic fever (DHF) which adds thrombocytopenia, coagulopathy, and vascular fragility and permeability. The most severe form, dengue shock syndrome (DSS), is characterized by a rapid, weak pulse, and may progress to hypovolemic shock and death (Carlos et al. 2005).

DENV has an outer icosahedral shell and a lipid bilayer that surrounds the nucleocapsid which contains the 11,000 kb positive- and single-stranded RNA (ssRNA) genome with a single open reading frame (Kuhn et al. 2002) that codes for:

The NS proteins have roles in viral replication and host immune system evasion. Of these, NS3 and NS5 are better defined than the other NS proteins. NS3 is a viral protease and helicase, which cleaves the single viral polypeptide into the seven proteins and unwinds the RNA duplex during replication, respectively. NS2b serves as a cofactor for the protease activity (Falgout et al. 1991) while NS4b interacts with the helicase domain (Umareddy et al. 2006). NS5 is the RNA-dependent RNA polymerase that also functions as a methyltransferase, which caps the 5′-RNA of new viral genomes (Issur et al. 2009). The functions of the NS1 and the transmembrane proteins NS2a, NS2b, NS4a, and NS4b are less well defined. NS1 is essential for viral replication (Lindenbach and Rice 1999) and together with NS4a and NS4b, aids in vesicle formation for the viral replication complex (RC) (Watterson et al. 2016). NS2a is required for viral RNA synthesis and virion assembly (Xie et al. 2015). 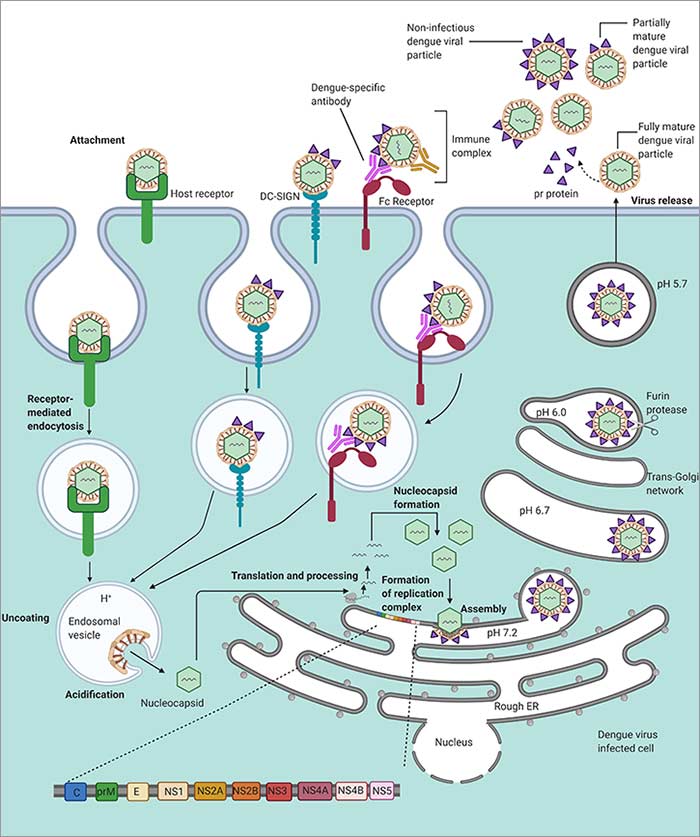 The Aedes mosquito is the vector that spreads DENV to humans. The precise binding receptors have not been fully defined yet, but candidate receptors are: heparan sulfate, glycosphingolipid nLc4Cer, DC-SIGN, mannose, CD14, and HSP70/90 (Cruz-Oliveira et al. 2015). Similarly, several cell types have been found to be permissive for DENV infection; they are: dendritic cells (DCs), endothelial cells, fibroblasts, keratinocytes, macrophage, mast cells, and monocytes (Garcia et al. 2017). The replication steps have been defined as: