Toll-like receptor (TLR)-mediated signalling is paramount in eradicating microbial infections and promoting tissue repair, but regulation must be tight. TLRs are implicated in a number of inflammatory and immune disorders and play a role in cancer.Many single nucleotide polymorphisms have been identified in various TLR genes and are associated with particular diseases. However, the signalling mechanisms are complex and TLRs act as double-edged swords, either promoting or inhibiting disease progression. Furthermore, therapeutic agents targeting the TLRs must be able to antagonize the harmful effects resulting without affecting host defence functions.Nonetheless, the potential of harnessing and directing the innate immune system with drugs targeting TLRs, to prevent or treat human inflammatory and autoimmune diseases as well as cancer, appears to be promising, and currently, many reagents are being developed enabling further research into such pattern recognition receptors.

However, what becomes more and more clear is the fact the innate immune response in different mammals is not identical. Indeed, marked variations and diversity exist between different mammalian species within pattern recognition receptor (PRR) structure (Jungi et al., 2011). These differences are based on evolutionary pressure within the innate immune system, potentially reflecting the specific threats encountered by each species (Zhang et al., 2010). This selective pressure appears to be absent in the available murine sequences, perhaps due to the intensive inbreeding of laboratory strains of mice (Werling et al., 2009). In contrast, recent evidence suggests that sequences of human and livestock PRR, while still diverse, show a higher degree of homology than their murine counterparts (Jungi et al., 2011). The similarity between human and livestock PRR is further supported by their similar response to some microbial-associated molecular patterns (MAMP), such as lipopeptides, bacterial LPS or small synthetic ligands (Kapetanovic et al., 2012), whereas species differences have been reported for the detection of these MAMP between murine and other mammalian PRR (Farhat et al., 2010; Grabiec et al., 2004; Hajjar et al., 2002).

Cells of the mono-myeloid lineage, such as monocytes/macrophages, granulocytes and dendritic cells capture antigens by phagocytosis, macropinocytosis or via interaction with a variety of cell surface receptors and endocytosis. This antigen-capture is in many instances initiated and aided by a variety of innate immune receptors, summarized under the term pattern recognition receptors (PRR). These PRRs expressed by innate immune cells are essential for detecting invading pathogens and initiating the innate and adaptive immune response. There are multiple families of PRRs including the membrane-associated Toll-like receptors (TLRs) and C-type lectin receptors (CLRs), and the cytosolic NOD-like receptors (NLRs), RIG-I-like receptors (RLRs), and AIM2-like receptors (ALRs). Initially, it was thought that these receptors were activated by pathogen-associated molecular patterns (PAMPs), expressed on the surface of the pathogenic microorganism. More recently, it has become clear that these receptors are activated by specific microbial-associated molecular patterns (MAMPs) present in microbial molecules, independent of commensal or pathogenic microorganisms, or by damage-associated molecular patterns (DAMPs) exposed on the surface of, or released by, damaged cells. Whereas PAMPs include various bacterial cell wall components such as lipopolysaccharide (LPS), peptidoglycan (PGN) and lipopeptides, as well as flagellin, bacterial DNA and viral double-stranded RNA, DAMPs include intracellular proteins such as heat shock proteins as well as protein fragments from the extracellular matrix.

In most cases, ligand recognition by PRRs triggers intracellular signal transduction cascades that result in the expression of pro-inflammatory cytokines, chemokines, and antiviral molecules. In contrast, some NLRs and ALRs oligomerize to form multiprotein inflammasome complexes that serve as platforms for the cleavage and activation of Caspase-1. Caspase-1 promotes the maturation and secretion of IL-1 beta and
IL-18, which further amplifies the pro-inflammatory response. Crosstalk between different receptors may also play a role in either enhancing or inhibiting the immune response since a single pathogen can simultaneously activate multiple PRRs. Therefore, tight regulation of PRR signalling is required in order to eliminate infectious pathogens and at the same time, prevent aberrant or excessive PRR activation, which can lead to the development of inflammatory and autoimmune disorders.

In contrast to CLRs, TLRs are mainly involved in inducing cell-signalling, and are evolutionarily conserved receptors similar to the Drosophila Toll protein, discovered to be important for defense against microbial infection. Stimulation of TLRs by the corresponding PAMPs or DAMPs initiates signalling cascades leading to the activation of transcription factors, such as AP-1, NF-κB and interferon regulatory factors (IRFs). Signalling by Toll-like receptors results in a variety of cellular responses including the production of interferons (IFNs), pro-inflammatory cytokines and effector cytokines that direct the adaptive immune response.

Toll-like receptors are type I transmembrane proteins characterized by an extracellular domain containing leucine-rich repeats (LRRs) and a cytoplasmic tail that contains a conserved region called the Toll/IL-1 receptor (TIR) domain (Werling et al., 2003; Jungi et al., 2011). The structure of several TLRs, with and without ligands, has been revealed by crystallography studies as a large horseshoe-shape, figure 1. 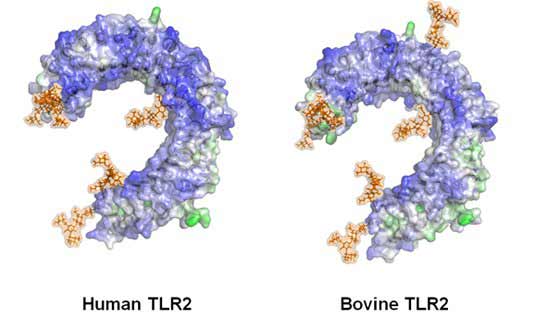 Toll-like receptors are predominantly expressed to various extents in tissues involved in immune function, such as spleen and peripheral blood leukocytes, as well as those exposed to the external environment such as lung and the gastrointestinal tract. Their expression profiles, and thus the subsequently induced responses vary among tissues, cell types, and between species (Werling et al., 2004). TLRs are located on the cellular surface with the exception of TLR3, TLR7, TLR8 and TLR9 which are localized in endosomal compartment (Werling et al., 2003).

In veterinary species and humans, 10 TLRs have been described, whereas twelve are known in the murine system: TLR1 to TLR10 in veterinary species and humans, and TLR1 to TLR9, TLR11, TLR12 and TLR13 in mice, the homolog of TLR10 being a pseudogene (Werling et al., 2003). Interestingly, the number of TLRs in the avian system seems to be different, with a variety of sub-TLRs being described (Brownlie et al., 2011).

TLR2 is essential for the recognition of a variet   y of PAMPs from Gram-positive bacteria, including bacterial lipoproteins, lipomannans and lipoteichoic acids. TLR3 is implicated in virus-derived double-stra   nded RNA. TLR4 is predominantly activated by lipo   polysaccharide. TLR5 detects bacterial   flagellin and TLR9 is required for response to unmethy   lated CpG DNA. Finally, TLR7 and TLR8 recognize small s   ynthetic antiviral molecules, and single-stranded RNA was reported to be their natural ligand. The correct ligand for TLR10 is still under investigation, but recent modeling studies revealed the binding orientations of hTLR10 heterodimer to be similar to that of other TLR2 family members. However, the binding orientation of hTLR10 homodimer is different from the heterodimer due to the presence of negatively charged surfaces at the leucine-rich repeats 11-14, thereby providing a specific cavity for ligand binding. Moreover, a multiple protein-ligand docking approach revealed that Pam3CSK4 might be the ligand for the hTLR10/2 complex and PamCysPamSK4, a di-acylated peptide, might activate hTLR10/1 hetero and hTLR10 homodimer. The murine TLR11 has been reported to recognize uropathogenic E.coli and a profilin-like protein from Toxoplasma gondii. This seemingly somewhat limited binding spectrum is further extended by the ability of TLRs to heterodimerize with one another, as well as with CLRs. For example, dime   rs of TLR2 and TLR6 are required for responses to diacylated lipoproteins while TL   R2 and TLR1 interact to recognize triacylated lipoproteins. Specificities of the TLRs are also influenced by various adapter and accessory molecules, such as MD-2 and CD14 that form a complex with TLR4 in response to LPS.

Signaling of Toll-like receptors and the molecules involved in human, murine and other mammalian species, including ruminants seems to be highly conserved. TLR signaling consists of at least two distinct pathways: a MyD88-dependent pathway that leads to the production of inflammatory cytokines, and a MyD88-independent pathway associated with the stimulation of IFN-β and the maturation of dendritic cells. The MyD88-dependent pathway is common to all TLRs, except TLR3. Upon activation, TLRs hetero- or homodimerize inducing the recruitment of adaptor proteins via the cytoplasmic TIR domain.Adaptor proteins include the TIR-domain containing proteins, MyD88, TIR-associated protein (TIRAP), MyD88 adaptor-like protein (Mal), TIR domain-containing adaptor protein-inducing IFN-β (TRIF) and TRIF-related adaptor molecule (TRAM). Activation subsequently leads to the phosphorylation of IκB and the subsequent nuclear localization of NF-κB, which triggers the production of pro-inflammatory cytokines such as TNF-α, IL-1 and IL-12. The specificity of the response to MAMPs or DAMPs is further increased by intracellular, post-receptor binding events, leading to the fact that individual TLRs induce different signalling responses by applying different adaptor molecules. TLR2 and TLR4 signalling requires adaptors involved in the MyD88-dependent pathway, such as TIRAP. In contrast, TLR3 triggers the production of IFNβ in a MyD88-independent manner through the adaptor TRIF in response to dsRNA. For the MyD88-independent pathway in TLR4 signalling, the adaptor protein TRAM is involved, which is restricted to this specific TLR4 pathway. 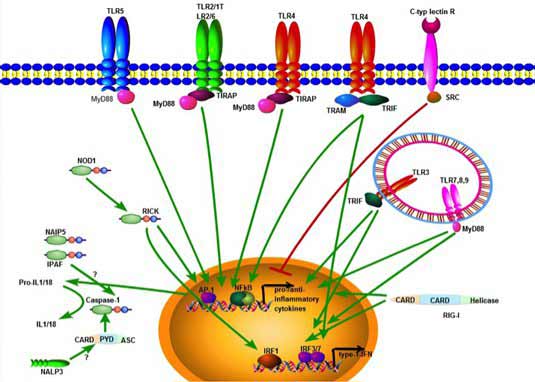 TLR3, TLR7, TLR8 and TLR9 recognize viral nucleic acids and induce type-I IFNs. For this, the signalling pathways involve the interferon regulatory factors (IRFs), a family of transcription factors known to play a critical role in antiviral defence, cell growth and immune regulation. Three IRFs (IRF3, IRF5 and IRF7) function as direct transducers of virus-mediated TLR signalling, and their activation depends on the TLR stimulated: thus, TLR3 activates IRF3 and IRF7, while TLR7 and TLR8 activate IRF5 and IRF7. In addition to these IRFs, several kinase-pathways are involved in fine-tuning the intracellular response. In case of, type I IFN production stimulated by the TLR9    ligand CpG, this has been shown to be mediated, for example by PI(3)K and mTOR.

Since recognition by PRR is associated with adaptive immunity by providing optimal immunostimulation, research antibodies are required that allow species-specific analysis, as cross-reacting antibodies are largely unavailable.

At least for the bovine system, monoclonal antibodies to TLR2 (Kwong et al., 2011) and TLR5 have been created. These should allow for a more detailed analysis of TLR expression by different innate immune cell subsets using flow cytometric analysis. Such reagents will not only allow comparison for species-specific expression patterns, but will also potentially inform host-ligand interaction.

Professor Werling graduated from the University of Veterinary Medicine in Hannover (Germany) in 1991, and received a PhD (DrMedVet) in Virology at the University of Zuerich. This was followed by a Marie Curie Research Fellowship in the lab of Chris Howard at the Institute for Animal Health (IAH Compton, UK). During this time, he also passed the exam as Specialist Veterinarian (Fachtierarzt FVH) for Laboratory Medicine and Immunology in Switzerland and gained a Ph.D. in Immunology (Univ. of London). After moving to the ETH Zuerich as a group leader and senior scientist, he continued working on bovine innate immune cells. In 2001, he was appointed as assistant professor (tenure track) at the Immunology Division at the Institute of Veterinary Virology (University of Bern) under Thomas Jungi. He joined the Royal Veterinary College in 2003, and became Chair and Full Professor for Molecular Immunology in 2007.