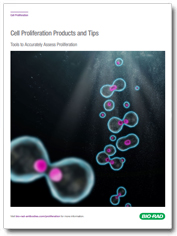 alamarBlue can be used for applications such as functional assay, immunofluorescence, and ELISA.

This reagent is offered in two sizes:

alamarBlue is a cell viability assay reagent which contains the cell permeable, non-toxic, and weakly fluorescent blue indicator dye called resazurin. This is a trusted and established reagent which has been available since 1993. alamarBlue is a useful non-toxic alternative to the commonly used MTT cell viability assay (3-(4,5-dimethylthiazol-2-yl)-2,5-diphenyl-tetrazolium bromide) (O’Brien et al. 2000).

Resazurin is used as an oxidation-reduction (REDOX) indicator that undergoes colorimetric change in response to cellular metabolic reduction. The reduced form, resorufin, is pink and highly fluorescent, and the intensity of fluorescence produced is proportional to the number of living cells respiring. alamarBlue is a direct indicator of cell health, it detects the level of oxidation during respiration, quantitatively measuring cell viability and cytotoxicity.

Our how to use alamarBlue page will provide you with useful methods and calculations for you to plan your experiments. 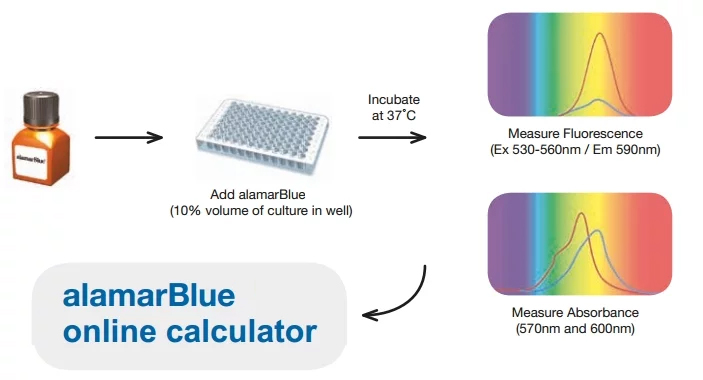 Use our alamarBlue online calculators

How alamarBlue Acts as a Redox Indicator

alamarBlue is an excellent redox indicator for cell proliferation and viability studies because it does not interfere in any way with the reactions of the electron transport chain. With alamarBlue, the cells remain fully functional, viable, and healthy, unaffected by the presence of the indicator, which is a property unique to alamarBlue.

alamarBlue cell viability indicator is ideally set up to detect oxidation by the whole of the electron transport chain. As can be seen from Table 1, the midpoint potential of alamarBlue is greater than that of any of the cytochromes, allowing it to detect oxidation by all the components of the electron transport chain. alamarBlue can be reduced by FMNH2, FADH2, NADH, NADPH, and cytochromes, since their midpoint potentials are lower than that for alamarBlue.

An alternative redox indicator is tetrazolium salt (MTT), which has a midpoint potential of -110 mV (see Table 1). This enables MTT to be reduced by the electron donors FMNH2, FADH2, NADH, and NADPH, however, since the midpoint potential of MTT is intermediate between that of the electron donors and cytochromes, MTT cannot be reduced by the cytochromes.