The p53 tumor suppressor/transcription factor regulates a wide variety of cellular functions, including apoptosis, cell cycle, DNA repair and metabolism. Since its discovery in 1979, p53 has been the subject of intense scrutiny. However, such is the complex behavior of this protein, it continues to challenge researchers despite nearly four decades of research.

This introductory guide aims to provide useful information for researchers beginning their p53 antibody based experiments.

The gene that encodes p53 is found on chromosome 17. The fullest length isoform produces a protein of 393 amino acids (53 kDa). Figure 1 is a simple schematic of the p53 structure and highlights the epitope for several of the most popular p53 antibodies.

indicates the location of the epitope of the antibodies listed below.

There are 12 isoforms of p53 created by alternative translation sites, alternative splicing and through the use of different promoters. The structures of the individual isoforms are shown in Figure 2. p53 isoforms are expressed in a tissue dependent manner and full length p53 is never expressed alone. 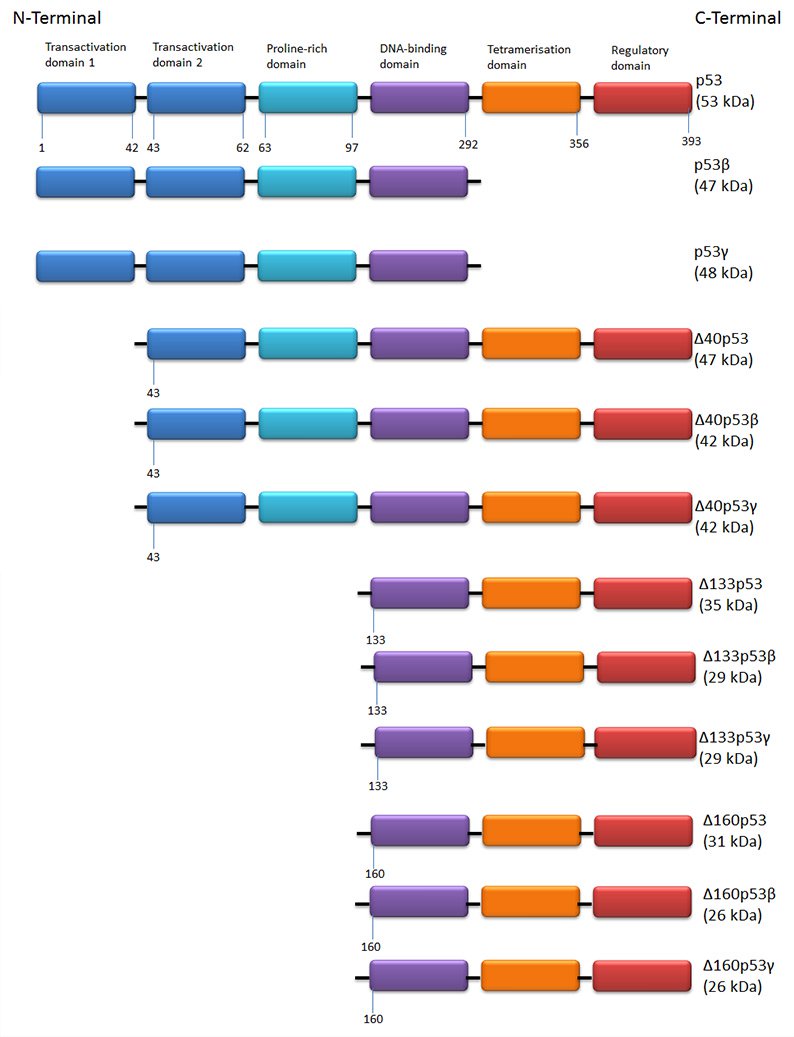 Fig. 2. The 12 isoforms of p53. Full length p53, p53β and p53γ differ in the expression of C terminal tetramerization domains. The ∆40 group have the same C-terminal variation but have lost the first 39 amino acids from the transactivation domain. Similarly the ∆133 and ∆160 groups lack significant portions of the N-terminal end of the protein.

Depending on the location of the epitope, antibodies may detect different isoforms of p53. Table 1 below lists the isoforms detected by three of the best characterized antibodies.

Under normal conditions p53 has a short half-life and is subject to degradation by ubiquitin dependent systems. p53 is stabilized and activated in response to a range of cellular stresses including metabolic stress and DNA damage. This is mediated mainly through uncoupling p53 from its key negative regulators, MDM2 and MDM4, leading to the accumulation of stable active p53. Therefore, when studying p53, attention must be paid to the expression system selected. Often detection of p53 may require exposure of cells to stressful conditions such as UV light.

Due its relevant abundance, p53 is detectable by western blot without the need for specialized protocols. What may vary is the number of isoforms detected by the primary antibody.  Table 1 above lists the isoforms detected by three of the most popular clones. Researchers may wish to specifically detect nuclear accumulation of p53 as this is particularly indicative of stress response.  For detecting nuclear proteins, Bio-Rad recommends the ReadyPrep™ Protein Extraction Kit (Cytoplasmic/Nuclear).

Cell stressors (e.g. UV light) promote a series of reversible post-translational modifications (PTMs) of p53 including multisite phosphorylation of the transactivation domain (N-terminus). Figure 3 shows the location of the phosphorylation sites of full length p53. Table 2 provides details of the kinases responsible for each phosphorylation as well as antibodies specific to each site.

Upon apoptotic stimulation, p53 translocates from the cell nucleus to the mitochondria, where it interacts with B cell lymphoma 2 (Bcl-2) family of proteins to regulate apoptosis. p53 binds to the pro-survival members, liberating the multi-domain pro-apoptotic members that then trigger the mitochondria related stages of apoptosis. Table 3 lists several of the pro-apoptotic and anti-apoptotic Bcl-2 family members. Table 4 lists antibodies against proteins relevant in p53 mediated apoptosis. For more information on apoptosis, refer to the Apoptosis page.