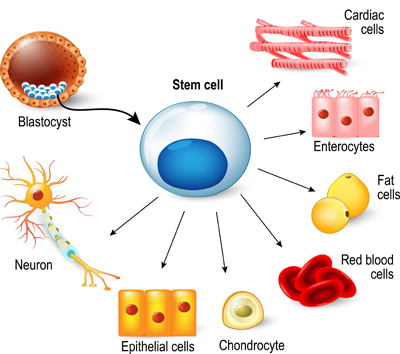 Embryonic stem cells (ESCs) derive from the inner cell mass of the blastocyst. They differentiate into three primary germ layers: ectoderm, endoderm, and mesoderm, giving rise to virtually all the cells of the body except the placenta.

ESCs can be grown in the lab in an undifferentiated state and are capable of long-term growth and self-renewal. Two important transcription factors, associated with maintaining the stem cell population, are Oct4 and Nanog.

Since this initial discovery, the technique of creating iPSCs has been refined and there is a considerable interest in their potential for drug development, modeling disease and transplantation medicine.

Genes that are important for maintaining ESCs are also involved in the process of reprograming differentiated cells to form iPSCs, including: Oct4, Sox2, Klf4, c-Myc, Lin28 and Nanog.

Both ESCs and iPSCs have the potential to become multiple cell types, resulting in a unipotent, terminally differentiated cell with a specific function. As both iPSCs and ESCs start to differentiate into different lineages the markers that they express change as they commit to different cell fates and lose their pluripotency.  For instance, cardiac and hematoendothelial progenitors can be identified by the expression of the cell VEGFR2 and CD34, whilst Nestin can be used to identify neural progenitor cells.

Bio-Rad offers a broad collection of antibodies useful for studying pluripotent stem cells and those in the early stages of differentiation. Click on the following related links to explore our product range by marker or use the filters in the table below to sort the attributes in order to find the antibody that fits your exact requirements.