Pyroptosis is a form of lytic regulated cell death (RCD) first described by Zychlinsky and colleagues in 1992 as apoptosis, but later renamed as pyroptosis in 2001 by Cookson and Brennan to reflect its inflammatory nature. It is triggered by perturbations of extracellular and intracellular homeostasis in the innate immune system. Its pro-inflammatory nature distinguishes it from other forms of RCD, like apoptosis and necroptosis, and it is in fact the most immunogenic of all the cell death mechanisms. It has distinct morphological features such as cellular swelling, chromatin condensation, and plasma membrane permeabilization. This mini-review highlights the role pyroptosis plays in regulated cell death and the mechanisms involved.

Pyroptosis is mediated by the pyroptotic caspases, caspase-1, caspase-4, and caspase-5 in humans, and caspase-11 in mice. Caspase-1 is activated (not necessarily by autoproteolytic processing), upon activation of various inflammasomes, whereas caspase-4, caspase-5, and caspase-11 are activated upon direct binding of LPS from gram negative bacteria. These active caspases then cleave gasdermin D (although more recently other members of the gasdermin family have also been implicated in pyroptosis), into a 199 amino acid carboxy-terminal fragment and a 242 amino acid amino-terminal fragment (in humans). The amino-terminal of cleaved gasdermin D integrates into the cell membrane to form a pore which directly leads to cell death. A simplified overview of the pyroptosis pathway is shown in Figure 1. 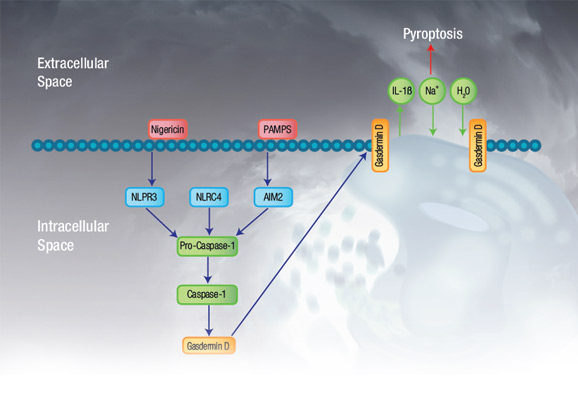 Infectious diseases and immune disorders produce pattern-associated molecular patterns (PAMPS) and damage-associated molecular patterns (DAMPS), which are unique to each pathogen and are essential structures required for pathogen survival. These can be detected by surface membrane bound pattern recognition receptors (PRRs) such as Toll-like receptors (TLR) and C-type lectin receptors (CLR), or cytoplasmic receptors like Nucleotide oligomerization (NOD) like receptors and retinoic acid-inducible gene I (RIG-I) like receptors. For more information visit our pattern recognition receptors webpage.

Inflammasomes are cytosolic sensors of PAMPS and DAMPS like DNA, bacterial flagellin, type 3 secretion system (T3SS) needle and rod subunits, toxins, and cellular perturbations. They are aggregates of NOD like receptors, absent in melanoma 2 (AIM2)-like receptors or tripartite motif-containing proteins with the adaptor protein, apoptosis associated speck-like protein containing a CARD (ASC), and can be thought of as analogous to the apoptosome in apoptosis. The inflammasome binds pro- caspase-1 and induces formation of its active form. Five inflammasomes have so far been shown to activate caspase-1. Detailed information on surface PRRs and inflammasomes in the context of pyroptosis are reviewed by Jorgensen and Miao (2015).

Human caspase-1, caspase-4, and caspase-5 can be detected in western blot and paraffin sections using rabbit anti-human antibodies. Alternatively active caspase-1 can be quickly and easily detected using our popular FLICA Kits which  are non-toxic cell-permeable reagents for the analysis of active caspases in whole, live cells. They are available in two formats excitable by a 488 and 640 nm laser, emitting at 525 and 685 nm respectively, allowing incorporation into multicolor flow cytometry panels and suitable for immunofluorescence microscopy. We also have Pyroptosis Caspase-1 Kits, available in green and red fluorescence, which in addition to FLICA Caspase-1, contain nigericin, a specific inducer of pyroptosis, and nuclear and viability stains.


In addition to the detection of active caspase-1, Bio-Rad has a full range of FLICA Kits available in the following formats: FAM, Magic Red, Sulforhodamine, and 660. They enable detection of other active caspases and are suitable for use in flow cytometry and fluorescence microscopy.

Figure 2 below shows an example of pyroptosis induction in Jurkat cells treated with nigericin after staining with the Pyroptosis 660 Caspase-1 Kit, counterstained with propidium iodide.

Gasdermins are a family of six (in humans) conserved bipartite proteins whose N and C-terminal domains are connected by a linker. Gasdermin D is the most studied and it has been observed that caspase-1 cleaves a linker, releasing the N-terminal domain from the C-terminal repressor domain. The N-terminal domain associates with the plasma membrane, oligomerizing, to form pores containing around 16 molecules, with the pore size ranging from 10-33 nm. Most of the gasdermin family members have now been shown to form pores. Interestingly, it has recently been discovered that gasdermin D is susceptible to cleavage by caspase-3, but in the pore forming domain, not the linker. Thus once apoptosis has been initiated by caspase-3, pyroptosis is prevented (Rogers et al. 2016).

Pore formation by gasdermin D breaks down the normal barrier of the cell membrane and the differences in ion concentrations normally found within cells and plasma have catastrophic effects. Potassium is forced out of the cell and sodium is drawn into the cell. With the sodium comes water causing the cell volume to increase, the plasma membrane is separated from the cortical actin cytoskeleton and the cells appear as over inflated balloons, before bursting and releasing the cytosolic contents. However if there are only a few pores, it is theoretically possible for the cell to repair them as has been recently shown for necroptosis (Gong et al. 2017).

In addition to cleavage of gasdermin D, caspase-1 cleaves the cytosolic restricted (they have no secretion signal) inflammatory cytokines IL-1β, and IL-18 into their mature forms. The pore size created by gasdermin D is large enough for IL-1β and IL-18 to be released before membrane rupture, and yet small enough for larger organelles to be retained. Cells containing only a few pores would therefore be able to release these cytokines without dying, but upon membrane rupture all internal cytokines would be released. Recent studies in gasdermin -/- mice have been shown to be defective for both pyroptosis and release of IL-1β and IL-18 and survive high doses of LPS, a pyroptosis inducer, which is lethal to wild-type mice.

Other members of the gasdermin family have varied expression patterns and been implicated in inflammation and pyroptosis in other sites, for instance gasdermin A in the skin. Different caspases can cleave them, such as caspase-3 for gasdermin E. This has been reviewed by Kovacs and Miao 2017.

Pyroptosis defends against intracellular infection through two actions. Firstly the compromised cell is eliminated, removing the pathogen's niche and therefore limiting the spread of infection. Secondly there is an inflammatory response which leads to the killing of the pathogen. However, pyroptosis itself does not kill intracellular pathogens. The pathogens, like intracellular bacteria, are held within the remains of the burst pyroptotic cell in a structure called the pore-induced intracellular trap (PIT) (Jorgensen et al. 2016). The effect of the PIT is to simultaneously hold the bacteria in place and attract neutrophils and macrophages through an increase in chemo-attractants such as DAMPs and eicosanoids. The neutrophils and macrophages then phagocytose the bacteria, probably through scavenger receptors, thereby killing them. Intracellular pathogens are constantly evolving to avoid the host immune defenses and many pathogens no longer activate inflammasomes and therefore the pyroptosis pathway. However, pyroptosis is still thought to be a major defense against opportunistic infections by environmental pathogens that have not evolved to evade mammalian defenses (Jorgensen et al. 2017).

Whilst pyroptosis plays an important part in host defenses against infection, it has been implicated in the pathology of chronic inflammation and autoimmunity. Pyroptosis has also been linked to neurodegenerative diseases like Alzheimer’s, as high levels of caspase-1 have been found in brains from Alzheimer’s patients. Furthermore, in mice which carry mutations leading to Alzheimer’s, when caspase-1 is also knocked out, there is protection from disease progression. In cardiovascular disease, NLRP3 mediated pyroptosis, in response to cholesterol or reactive oxygen species in endothelial cells, leads to cell death and destruction of vascular endothelial function. In some cancers, carcinogenic changes can lead to inflammatory responses through pyroptosis, which promotes tumor progression and caspase-1, has been found to be inhibited in prostate and hepatocellular carcinoma, preventing cell death (Ma et al. 2018).

In conclusion, pyroptosis is an important regulated cell death mechanism by which intracellular pathogen infections are controlled through removal of the pathogen’s niche, preventing spread and an increase in unregulated inflammation. Pathogens are constantly trying to evade initiation of regulated cell death, but it remains an effective method of controlling opportunistic pathogens. Pyroptosis can however contribute to disease pathology if unregulated. Finally pyroptosis does not work independently; the signaling pathways of pyroptosis are intertwined with necroptosis and apoptosis as a guard against evasion from one or more of the regulated cell death pathways.

For further information on pyroptosis and the important mediators of the pathways, please visit our Regulated Cell Death webpage and download our pathways poster.