Myelin is a sheath that surrounds nerve cells to protect them and enhance signal transmission. It makes up approximately half of the white matter found in the human brain and occupies about 20% of the space, indicating the importance of myelin in neurotransmission.

Myelination differs between the peripheral nervous system (PNS) and the CNS (Figure 1). In the PNS, Schwann cells surround the axon, proliferate, and wrap themselves around the axon leaving dispersed gaps termed nodes of Ranvier (Figure 2). In the CNS, oligodendrocytes extend a plasma membrane structure out to support axons from several neurons. In both scenarios, the structure wraps itself around the axon forming a mesaxon where the membranes make contact. One side of the membrane slides underneath the other and continues to wrap itself around the axon. The leading point of this is called the internal mesaxon. As the latter continues to encircle the neuron, the membrane also extends laterally along the axon in a series of layers (Figure 3) forming neurilemma. A complex system of channels in the cytoplasm of the extending membrane supports additional membrane trafficking to the growing edge of the myelin sheath (Velumian et al. 2011). One oligodendrocyte can myelinate up to 40 axons (Pedraza et al. 2009, Snaidero et al. 2014). 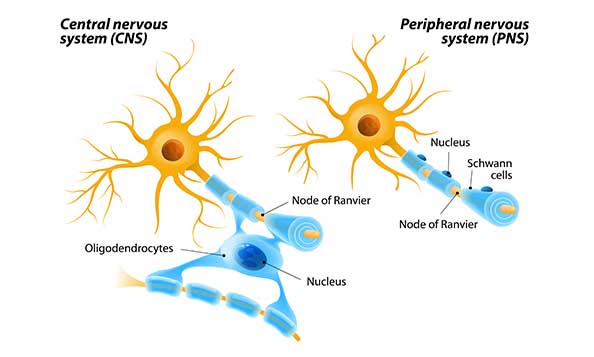 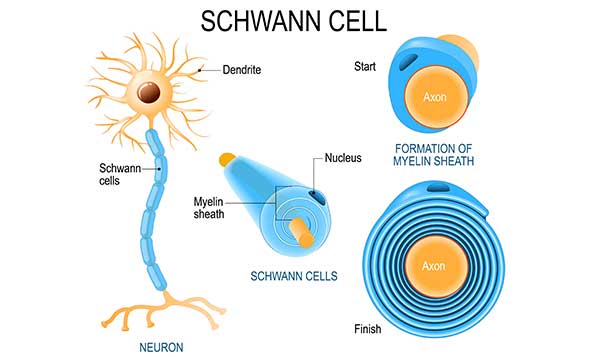 Compaction of the Myelin Sheath

For the myelin sheath to adopt the classical tightly wound roll structure, the membrane layers undergo compaction, a process that pulls the membranes of the Schwann cells closely together. Compaction (Readhead et al. 1987) commences in the outer layers while the inner tongue is still being extended around the axon (Figure 3). 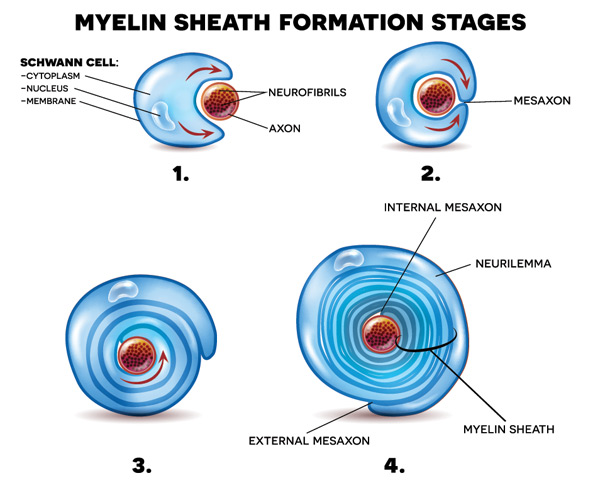 MBP is the key component in compaction. Different to normal protein synthesis, MBP mRNA and ribosomes are transported to the innermost growing layers where translation occurs and sufficient MBP is synthesized to allow compaction to proceed. However, it is critical that compaction doesn’t interfere with the still ongoing wrapping process. It has been proposed that 2′-3′-cyclic nucleotide-3′-phosphodiesterase (CNP) functions as a candidate protein spacer that keeps the growing myelin sheath layers separated thus regulating compaction (Snaidero et al. 2014). One proposed mechanism implicates axonal signals (Wake et al. 2011) combined with retrograde diffusion backwards towards the outer layers for compaction timing. Whichever way compaction is regulated, once MBP is bound by the two myelin sheath layers, it rapidly polymerizes and compacts the membrane (Aggarwal et al. 2013).

Bio-Rad supplies a range of antibodies against MBP suitable for histology, ELISA, and western blotting. These are found in the table below, which connects you to the product datasheets and the peer reviewed publications where the antibodies have been used.