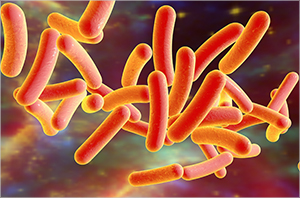 Legionnaires’ disease, a severe pneumonia, is caused through infection of lung tissue by Legionella spp. bacteria. It was first observed in the summer of 1976, when 221 attendees of the American Legion convention displayed an unusual lung infection; 34 cases were fatal.

A large investigation by the US Centers for Disease Control and Prevention (CDC) identified the pathogen by the end of 1976, a newly discovered rod-shaped, gram-negative bacterium, named Legionella pneumophila. Subsequently it appeared that the bacterium had been first isolated in the late 1940s, but never characterized. Additionally, Legionella was also shown to be responsible for a series of flu-like diseases in 1968 that had been termed Pontiac fever (Fraser et al. 1977).

Legionella are gram-negative, rod-shaped gamma-proteobacteria that are widely distributed in freshwater and moist soil, meaning that they can populate any structures that contain water as well as survive in biofilms. It was also the first bacterium found to use protozoan hosts, aquatic amoebae, to multiply. Protozoans provide an intracellular replication pathway for the generation of infective Legionella vesicles; cyst forming protozoans provide enhanced environmental protection. This characteristic provided the clue that Legionella may use human lung macrophages for replication (Brenner et al. 1979).

Humans are primarily infected by inhaling Legionella-containing aerosols from water sources as diverse as showers and air-conditioning systems. Although rare, human-to-human transmission has been found (Correia et al. 2016). While anyone can be infected with Legionella, people with underlying medical conditions like diabetes or cancer, smokers, and males over 50 years old, are more likely to catch Legionnaires’ disease. There is also a seasonal bias, summer and early autumn are peak infection times.

Legionella manage to survive in a variety of phagocytic hosts, many species of amoeba, and mammalian cell lines. This is facilitated by a biphasic life cycle that has a noninfective replication stage and a virulent transmissive phase. In the former, genes for growth and division are activated and those that control infectivity are downregulated. Once bacterial density has increased, the reverse happens and bacteria leave the host in search of new infection targets (Oliva et al. 2018).

One of the key regulators that controls this switch is the RNA-binding protein, carbon storage regulator A (CsrA), a global, posttranscriptional regulator of gene expression that supports the replicative stage. Once a certain bacterial density has been reached, CsrA is bound by small noncoding RNAs that abrogate its function, leading to the virulent phase. CsrA also regulates the expression of at least 40 defective in organelle trafficking/intracellular multiplication (Dot/Icm) Type IVb secretion system (T4SS) effector proteins (Sahr et al. 2017). The T4SS works in conjunction with the type 2 secretion system (T2SS) in L. pneumophila to support infection, maintenance, and replication in the host.

After the initial binding of the bacteria by the host cell, the T2SS is critical for successful infection and maintenance of L. pneumophila in the host. It deploys at least 25 effector proteins, mostly enzymes; among them a phospholipase C and chitinase that have been shown to promote bacterial persistence in lung tissues (Cianciotto 2009).

To maintain and replicate inside host cells, Legionella create an intracellular environment, the Legionella-containing vacuole (LCV), that supplies them with nutrients while avoiding lysosomal degradation. The T4SS secretes over 300 proteins that interfere with host cell functions to ensure bacterial survival (Schroeder 2017, Qin et al. 2017). Some of their functions are:

The recruitment of the ER vesicles is achieved via ubiquitination of host cell reticulon 4 (Rtn4), leading to tubule rearrangements as well as modifications in Rtn4 associated with the replication compartment (Kotewicz et al. 2017). A further example of L. pneumophila’s ability to hijack host cell processes is the manipulation of the cell-death pathways, implemented via the SidF T4SS effector. SidF binds the proapoptotic BNIP3 and Bcl-rambo, and neutralizes their functions, preventing apoptosis of the infected host cells (Banga et al. 2007). Conversely, it has been suggested that L. pneumophila’s VipD protein can mediate caspase-3 activation and thus induce apoptosis (Zhu et al. 2013).

While a large body of data has been accumulated on Legionella spp., much remains to be elucidated about these bacteria. To aid with basic Legionella spp detection, Bio-Rad offers two monoclonal antibodies and a polyclonal antibody, all suitable for immunofluorescence. Rabbit Anti-Legionella SPP, OBT0943, will detect serogroups 1-12 and is available in purified, biotin, and HRP conjugated formats for use in ELISA, frozen sections, and immunoblots. The monoclonal antibodies, 5625-0066 (clone LP46) and 5625-0457 (clone LP101), react with L. pneumophila serogroup 1 and serogroups 4/10/14, respectively.

Bio-Rad supplies secondary antibodies certified to work in immunofluorescence detection. Additionally, if you are new to immunofluorescence staining have a look at the 10 Tips for Selecting and Using Fluorophores in IF Experiments.