What is an Antibody? (Immunoglobulin) 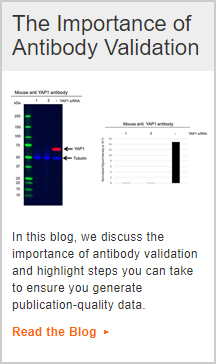 Antibodies, also referred to as immunoglobulins, are glycoproteins naturally produced in response to invading foreign particles (antigens) such as microorganisms and viruses. As such, they play a critical role in the immune system’s defense against infection and disease.

Antigens recognized and bound by antibodies can be proteins such as receptors expressed on cancer cells, sugars on bacterial and viral cell surfaces, hormones, chemical compounds, or nucleic acid structures. The region of an antigen that interacts with an antibody is called the epitope.

Normally, an animal’s immune system will generate a large group of antibodies that recognize several epitopes of a particular antigen. Each antibody is secreted by a different antibody-producing plasma cell and may be specific for a different epitope. Since the antibodies found in serum are collectively produced by many plasma cells (clones), they are described as polyclonal. While this is an advantage for fighting infections in nature, the heterogeneity of polyclonal antibodies limits their use as research tools.

A major breakthrough in the development of antibodies for research applications was the development of a technique for producing monoclonal antibodies in 1975 by Köhler and Milstein (1). The technique involves removing B cells (plasma cell precursors) from the spleen of an animal that has been challenged with an antigen, and subsequently fusing with an immortal myeloma tumor cell line. This results in a single-cell hybrid known as a hybridoma. The B cells confer antibody production capability, while the myeloma cells enable hybridomas to divide indefinitely and grow well in culture. Hybridomas secrete only one antibody type, effectively ensuring a long-term supply of antibodies selective for a single epitope, which are also known as monoclonals.

What is the structure of an antibody?

Many of the key structural features of antibodies can be highlighted using immunoglobulin G (IgG) as a model since IgG is the most abundant antibody in serum.

The classical representation of an antibody is as a Y-shaped molecule composed of four polypeptide subunits with two identical heavy and light chains (Figure 1). The N-terminus of each heavy chain associates with one of the light chains to create two antigen-binding domains. These are the arms of the “Y” shape and are termed fragment antigen binding (Fab) domains.

The C-termini of the two heavy chains combine to form the fragment crystallization (Fc) domain, which represents the tail of the “Y”. The Fc domain is important for the antibody’s interaction with effector cells such as macrophages and for activation of the complement cascade. The four polypeptide chains are held together by covalent disulfide bridges and non-covalent bonds.

However, IgG heavy chains contain one variable region (found at the N-terminus) and three constant regions (Figure 2). Unsurprisingly, the variable regions of both chains localize to the Fab domains, providing the structural basis for the antigen and epitope-selectivity of antibodies.

Advances in the understanding of antibody structure and function, bacteriophage replication, and DNA manipulation and mutagenesis led to the development of a method for the generation of recombinant monoclonal antibodies using phage display antibody libraries.  This technology addresses the limitations of the traditional hybridoma method, which is known to be time consuming and expensive, requiring extensive expertise, as well as specialized cell culture and animal facilities. In addition, antigens used to generate antibodies using hybridoma technology can be toxic in animals, or poorly immunogenic, and thus may not elicit an immune response. Antibody library and phage display technology can be used to generate highly specific, high affinity antibodies in vitro without reliance on the immunogenicity of the antigen or the use of animals. Such recombinant antibodies are suitable in research applications where traditional monoclonal antibodies are used.

At Bio-Rad, recombinant monoclonal antibodies are generated using a unique and innovative method based on the Human Combinatorial Antibody Library (HuCAL®) and our advanced CysDisplay® method of phage display. The HuCAL PLATINUM® library contains 45 billion functional human antibody specificities already prefabricated in an engineered Fab format that represent >95% of the human antibody repertoire. The technology can be applied to generate a customized antibody specific for just about any antigen for use in research and in vitro diagnostic applications.

Want to make your own immunoglobulin? As an antibody manufacturer with over 30 years of experience, Bio-Rad offers assistance with immunoglobulin production, conjugation of antibodies and for the generation of new monoclonal immonuglobulin in your laboratory or ours.

Some of our immunoglobulin manufacturing tools include:

View all our antibody manufacturing tools

Bio-Rad is a global antibody manufacturer and supplier of over 10,000 immunoglobulins, kits and accessories.

We provide great customer support for all of our products and services so please contact us with any questions on their use or the results you can expect. We can even help source products not currently available or develop them to your specification using our custom immunoglobulin services .