The presence of dead cells in your sample can greatly affect your staining and therefore the quality of your data. This is because dead cells have greater autofluorescence and increased non-specific antibody binding, which can lead to false positives and reduce the dynamic range. This may make identification of weakly positive samples and rare populations difficult. Whilst using gates based on the forward and side scatter can help to remove debris and dead cells it will not exclude them all. Because of this, dyes have been developed to distinguish live from dead cells.

One group of viability dyes are the nucleic acid binding dyes. Examples of these include propidium iodide (PI) and 7-AAD which are excitable by both the 488 nm and 561 nm lasers. When they bind to double stranded nucleic acid they fluoresce. They are excluded by live cells, as these dyes are not membrane permeable. They can be added directly to samples after being stained with antibodies and after a brief incubation acquired as normal. The dead cells can then be identified and removed from the final analysis by gating on the unstained population (live cells). As these dyes rely on membrane integrity it is not possible to fix the samples. 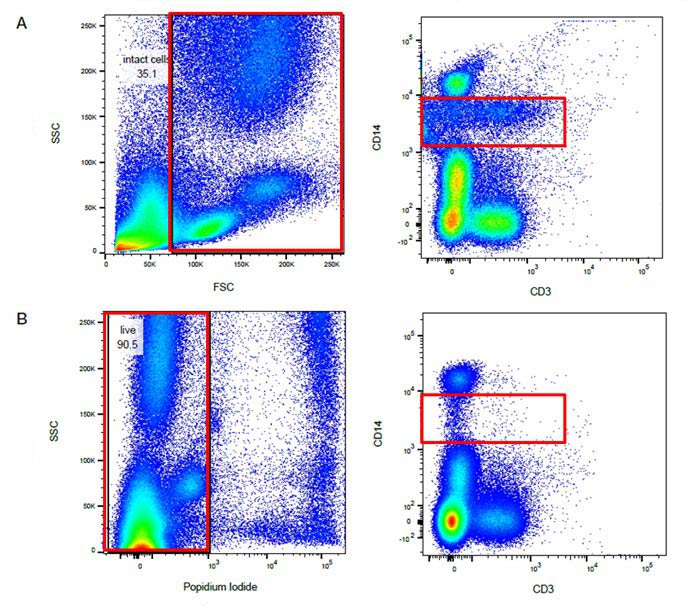 Fig. 24. Using a live/dead stain can improve your staining. A. Use of forward and side scatter gating (red rectangle) may not remove all dead cells and some non-specific binding may still be present. B. Exclusion of dead cells using propidium iodide staining (red rectangle) means less non-specific binding and easier identification of positively stained populations. Images shown here are human peripheral blood stained with CD14 and CD3.

There are a second group of viability dyes available to discriminate dead cells from your samples. These are protein binding dyes rather than DNA binding dyes. These dyes will bind to both live and dead cells (Figure 25). However when a cell has a compromised membrane as seen in dead and dying cells there is access to a greater amount of protein therefore they have higher fluorescence. Similar to the DNA binding dyes, the dead cells can be excluded by gating on the less stained population (live cells). 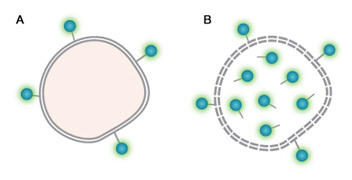 The benefit of these dyes is that once the cells are stained with the viability dyes they can be fixed (they can also be used unfixed) without any reduction in the resolution between live and dead cells. In addition, they are available in a broader range of excitation and emission spectra than DNA binding dyes for convenient addition to multi-color flow cytometry panels.