Compensation Beads and How to Use Them with StarBright Dyes 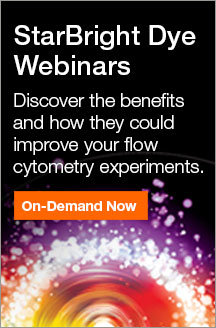 When building multicolor panels, it is essential to have single stained samples as compensation controls. This allows you to accurately remove unwanted fluorescence or spillover in other detectors, ensuring only specific signals are used in the final analysis. Check out our dedicated flow cytometry controls webpage to find out more about how to set up compensation controls.

Antigen capture compensation beads are a useful tool when compensating, particularly when you have precious samples and want to ensure that you don’t waste cells optimizing your experimental set-up. Using cells will generally give you the best match of spectra, including autofluorescence, but in some situations, your markers may have low antigen density or are upregulated in your experiment, leading to inaccurate compensation. In these instances, using beads may be more suitable for compensation.

Compensation beads have bright reproducible staining and including unstained beads, will provide you with a clear positive population and negative control, resulting in more accurate compensation. A comparison of staining of CD45RO, which has continuous expression rather than a clear positive and negative, on cells and beads is shown in figure 1. 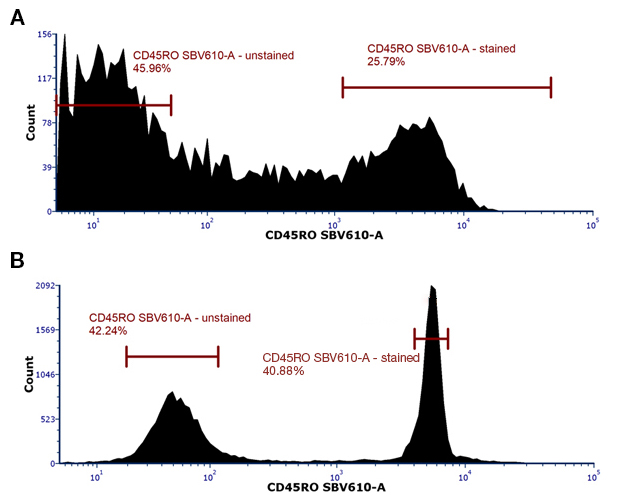 Fig. 1.  Typical staining seen on beads compared to cells. A, Cells or B, beads (SpectraComp Beads, Cambridge Biosciences) were stained with CD45ROSBV610. While a definite positive population can be seen in the cells (lymphocytes), the difference between the negative and positive is clearer using beads for this marker.

Antibody capture beads, rather than fluorophore impregnated beads, allow you to use the same conjugated antibody you will be using in your experiment, which is especially useful if you are using PE or APC based tandems or Brilliant Ultraviolet and Violet tandem dyes, which can change with each manufacturer.

Whether using cells, beads, or a combination of both for each fluorescent dye in your panel, use the same staining conditions as your experiment and do not change the voltages of the photomultiplier tubes (PMTs), as this will lead to incorrect compensation. It is always best to check your single stains when compensation has been applied by using the NxN function in your analysis software to make sure there are no unusual staining patterns and that the compensation is accurate.

To test the performance of StarBright Dyes in a multicolor panel, when using antibody capture compensation beads to correct spillover, we designed a simple 12-color panel to look at various subsets in human peripheral blood. The panel (Table 1) contained StarBright UltraViolet, StarBright Violet, and StarBright Blue Dyes as well as conventional fluorophores such as FITC, PE, and Alexa Dyes. This panel was then compensated using single stained cells, or antigen capture beads from multiple vendors. The various capture beads used are listed in Table 2. DAPI was used as a viability control. Single stained cells were always used for compensating DAPI, regardless of the panel.

Using human peripheral blood cells as the single cell stains for compensation control, the 12-color panel enabled us to detect T cells, B cells, and monocyte populations in human peripheral blood. Helper and cytotoxic T cell populations could be identified particularly the memory, naïve, effector memory, TEMRA, and central memory subsets. These were identified based on CD45RA, CD45RO, CD57, and CD27 expression (Figure 2). 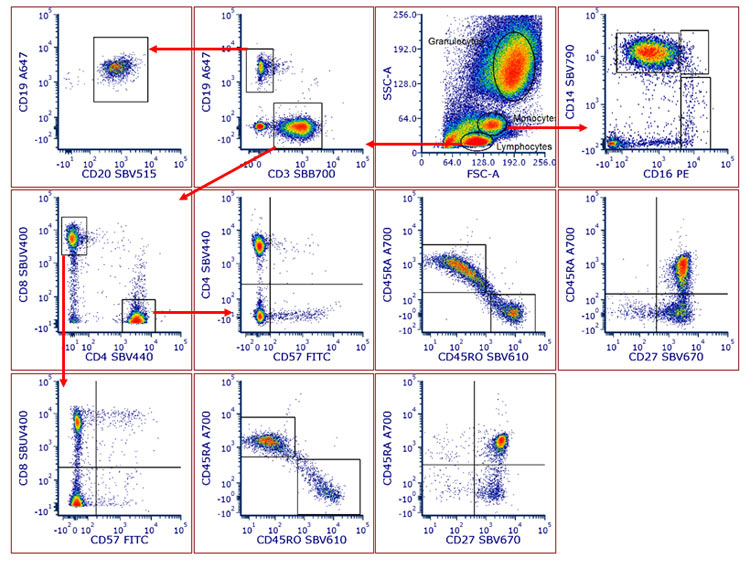 Fig. 2. Human peripheral blood was stained with antibodies conjugated to StarBright Dyes, to identify major lineages and subsets. T cells, B cells, and myeloid lineages could easily be separated in this panel. Within the T cell compartment, T helper and T cytotoxic cells could be identified. Further, the memory, naïve, and effector memory status of these subsets could be detected based on CD45RA, CD45RO, CD27, and CD57 expression. Classical, nonclassical, and intermediate monocytes could be found using CD14 and CD16. Data were analyzed in FCS Express Software.

The panel was repeated using the various types of beads from each vendor and the data analyzed. Cell populations were able to be identified, regardless of the sample used for compensation controls, with similar cell populations and percentages able to be identified each time (Figure 3). When comparing the SpectraComp beads, a different donor was used so the values do not match those obtained for the other beads but do match the panel using the same cells as the sample for compensation. 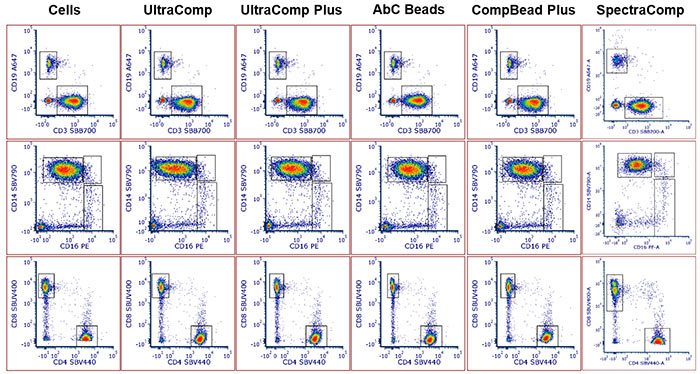 Fig. 3. Comparison of specific subsets using various samples as controls. T cells and B cells (top panels), myeloid lineages (middle panels), and T helper and T cytotoxic cells (bottom panels) could be identified regardless of the sample used for the compensation control. Furthermore, there were minimal differences between the population shape and number of cells within each population.

The spillover and spreading matrices were collected for each panel and compared to the panel which used cells as compensation controls. While there were some slight differences in the spillover values obtained from panels compensated by beads, very few values showed significant changes (e.g., SBUV400 vs DAPI and SBV440 vs DAPI). The spreading matrix was also similar for all panels apart from the panel using CompBead Plus. However, despite the increase in spreading, determined by the analysis software (FCS Express), it did not manifest in a different pattern of staining in the populations analyzed. This is mainly due to the fluorescent dyes, where high spreading would be likely to occur, being on mutually exclusive markers that were not of interest in the analysis e.g. CD3 and CD14 or CD20 and CD57 double positive cells. We would recommend each user determines the optimal sample for their compensation as part of their panel building optimization.

The full data set showing the panel data, spillover matrix, and spreading matrix for each panel is available to download as a PDF. For more information on panel building, we have dedicated webinars, an online flow panel building tool, and our popular Flow Cytometry Basics Guide.

While there are pros and cons for using cells, beads, or a combination of both to set up compensation controls in multicolor panels, StarBright Dyes give reproducible data, regardless of the choice of compensation method used, allowing you to build bigger and better panels.