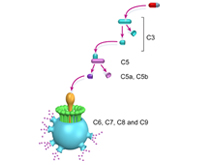 Activation of complement is the result of a cascade of proteolytic steps involving three different pathways:

All three pathways converge at C3, one of the key control points in the proteolytic cascade, leading to the formation of the membrane attack complex (MAC) and subsequent cell lysis.

Bio-Rad has a continually evolving range of antibodies against components of the complement system and recombinant proteins which mimic key signalling molecules. These include:

Antibodies are available against many key components and markers such as C4d, C1q, C3 and C-reactive protein.  For more information regarding C4d, a well-established indicator of classical complement activation and therefore a popular marker of antibody mediated renal and cardiac transplant rejections, read our article on complement component C4d and biomarkers of transplantation rejection.

In addition to C4d, Bio-Rad also offers a wide range of other anti-human markers for complement such as: