Role of Aurora A Kinase 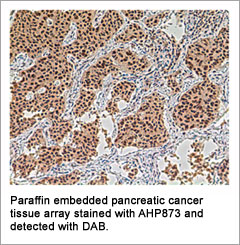 Aurora A Kinase expression is regulated by the tumor suppressor protein p53, which is found at the centrosome during mitosis. p53 binds and inhibits Aurora A Kinase activity. Choose from our selection of quality p53 Antibodies.

Aurora A Kinase also acts as an oncogene as it has been shown to transform cells in vitro. The role of Aurora A Kinase in cancer is thought to be due to its dysregulation. This leads to cells unable to complete mitosis, resulting in aneuploid cells, which are a trait of many tumors. As Aurora A Kinase is over-expressed in many tumors, including breast, colon, leukemia, ovarian and prostate, it is now a target for cancer therapy.

Current research in the pharmaceutical industry includes the development of Aurora A Kinase inhibitors as novel cancer treatments, some of which are already in clinical trials. Our cell biology range has a selection of quality products dedicated to Oncoprotein and Tumour Suppressor Protein Research.

Our versatile range of Aurora A Kinase antibodies

Our Aurora A Kinase Antibodies are suitable for immunohistochemistry of frozen tissue sections, immunofluorescence, immunoprecipitation and Western blotting. MCA2249 (Clone 35C1) is available in a choice of purified and biotin formats and also cross-reacts with mouse.
It specifically recognizes an epitope within the non-catalytic N-terminal domain of Aurora A Kinase and does not inhibit Aurora A Kinase activity. These quality antibodies are part of our extensive Cell Cycle Associated Reagents from our cell biology range.