Trichomonas vaginalis is a flagellate parasitic protozoan, originally described by Alfred François Donné in 1836 as the causative agent of trichomoniasis. It is a sexually transmitted disease (STD) regarded as mild and easily curable, but its wide incidence and associated health complications, compounded by reliance on a few therapeutics beginning to encounter increasing resistance, makes it a public health problem. Additionally, the immunology of T. vaginalis infections needs further research as large knowledge gaps remain.

T. vaginalis infection is the most common nonviral STD.  A 2019 publication by the World Health Organization (WHO) estimated global T. vaginalis cases in 2016 at 156 million, representing almost 50% of global STDs (Rowley et al. 2019). A US study discovered infection rates of 1.8% in women and 0.5% in men aged 18–59 years (Patel et al. 2018). Carriers can be asymptomatic. Trichomoniasis is often concomitant with other STDs, mainly gonorrhea and bacterial vaginosis in women (Wølner-Hanssen et al. 1989). Additional complications, possibly due to damage to mucosal membranes, are increased acquisition of HIV and also higher HIV transmission rates (Laga et al. 1993, Sorvillo and Kerndt 1998). T. vaginalis infection is linked to adverse outcomes in pregnancy such as preterm birth, low birth weight, and premature rupture of membranes (Silver et al. 2014).

Humans are the only natural host for T. vaginalis where it infects the urogenital tract. It has an oval shape that appears pear shaped when observed in a slide mount for diagnosis. Four anterior flagella and an undulating membrane structure, that some have termed a fifth flagella, create movement. Detecting this movement is essential for direct diagnosis. This motile trophozoite form was traditionally considered to be the only form for T. vaginalis to exist in. More recent research suggests that it can also exist as a pseudocyst with internal flagella (Pereira-Neves et al. 2003, Beri et al. 2020).  T. vaginalis generates ATP with hydrogenosomes, instead of mitochondria, enabling it to survive in low oxygen environments (Chose et al. 2003). Work is still ongoing to define its physiology (Lee et al. 2009). 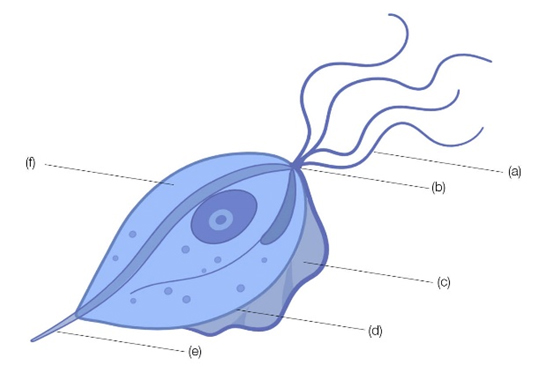 Fig. 1. Schematic drawing of Trichomonas vaginalis. (a), anterior flagellum; (b), pelto; (c), undulating membrane; (d), costa; (e), axostyle; (f), hydrogenosomes. The parasite has an average length and width of 9 to 23 and 7 µm, respectively.

T. vaginalis infects human epithelia by initiating adhesion, cellular damage, and immune modulation in the host tissue; it achieves that through secretion of cytolytic factors, enzymes, and interaction of parasite ligands with host cell receptors. Among them:

The mucosal immune system is the prime defense against T. vaginalis. While both adaptive and innate immune responses occur, it is the innate immune system that is more beneficial in the long term as it has been found that T. vaginalis does not produce long term immunity. During the course of infection, the trophozoites trigger an inflammatory response characterized by interleukin-8 (IL-8) and interleukin-6 (IL-6) release (Fichorova 2009, Jarrett et al. 2015). Neutrophils and macrophages also release nitric oxide (Frasson et al. 2012). While IgA is produced by B cells, it has also been shown that T. vaginalis’ proteases can cleave IgA and IgG and also have leukotoxic activity against B cells (Mercer et al. 2016). The specific immune response to T. vaginalis is further complicated by the parasite’s symbiotic interaction with Mycoplasma hominis in some cases (Rappelli et al. 2001). T. vaginalis can also be infected with one or more double-stranded RNA (dsRNA) viruses which have been provisionally assigned to the Totiviridae family of dsRNA viruses (Goodman et al. 2011).

In all, while progress has been made to elucidate the proteome of T. vaginalis, its pathogenesis and host immune responses remain poorly understood. The lack of an animal model has also hindered research and vaccine development.