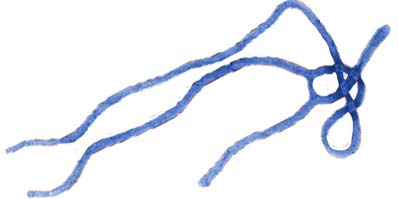 Does the Ebola virus ever really go away? 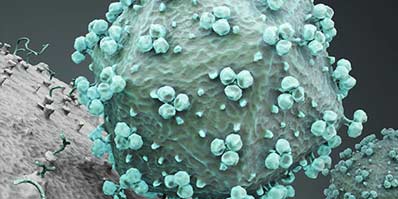 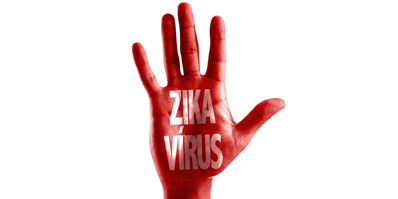 The rise in Zika virus research — an update

Cytomegalovirus (CMV) is ubiquitous, infecting a wide range of animal species such as primates (including humans), rodents, and domestic animals (Mocarski 1993). These viruses share common growth characteristics typified by the cytopathic effect of the formation of nuclear and cytoplasmic inclusions (leading to cell enlargement; cytomegaly), and the ability to remain dormant in the host. Such characteristics led to their classification as β herpesviruses (Ho 1991).

The incidence of human CMV (HCMV) infection ranges from 40-100% of any given population (Alford and Britt 1990). HCMV infections are endemic, spreading via body secretions such as saliva, colostrum, blood, and urogenital secretions, and are generally asymptomatic in healthy individuals (Alford and Britt 1990). However, infections in people with an impaired immune system, such as those undergoing cancer treatment, transplantation, or have acquired immunodeficiency syndrome (AIDS) can lead to serious disease and even death. The severity of the HCMV induced disease and the organs affected appear to be dependent on the balance between host factors, for instance, an underlying clinical condition that initially causes the immune impairment, the type and severity of the immune deficiency, and the virulence of the virus such as efficiency of viral replication and dissemination.

The prevalence of CMV is due to several factors, most notable is the ability to silently infect the population to produce a lifelong infection in the face of a competent immune response. CMV is an opportunistic pathogen that in the event of a weakened immune system can reactivate from a dormant state to generate a productive infection.

CMV is a member of the herpesviridae family of large, icosahedral enveloped virions with a double stranded linear DNA genome. Although these viruses share a common morphology and the ability to establish a latent infection, they vary greatly in their replication cycle, genomic arrangements, pathogenicity, and disease.

The CMV virion is 150-200 nm in diameter with an inner capsid core of approximately 100 nm, surrounded by the tegument and enclosed in a lipid bilayer envelope as shown in Figure 1 (Mocarski 1993). The capsid is made of 162 individual capsomers, which form the icosahedral shaped core. The core contains the double stranded DNA genome. The tegument is comprised of a matrix of viral proteins, with the outer lipid envelope studded with numerous viral glycoproteins that give the envelope its spiked appearance. 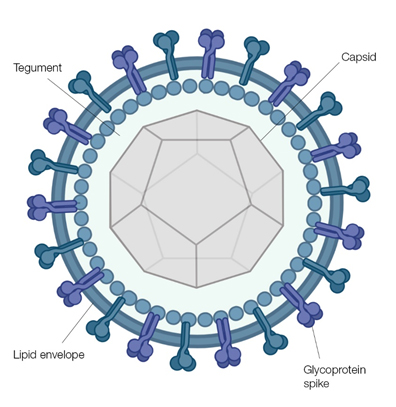 Fig. 1. Schematic representation of the herpesvirus virion seen through a cross section of the envelope with the spikes projecting from its surface. The icosahedral shaped capsid is shown and the relative position of the tegument is indicated.

The CMV virion is composed of at least 30 proteins, with molecular weights ranging between 10 to 200 kDa (Baldick and Shenk 1996). These proteins are distributed in the three main structural regions of the virion; the capsid, tegument, and the outer lipid envelope. The tegument contains the majority of the proteins, around 20-25 proteins, while the capsid only has a limited number. The major capsid protein (MCP), as its name suggests, is the major constituent of the viral capsid, making up 90% of the total protein content of the capsid (Spaete et al. 1994). There are four structural capsid proteins as well as the minor capsid protein, the minor capsid binding protein, and the smallest capsid protein (Gibson 1996).

The outer envelope of CMV is composed of a lipid bilayer which contains many viral proteins. It is these proteins that protrude from the lipid layer that give the virion its characteristic spiked appearance. The envelope glycoproteins have been an important area of study as not only are they important for viral entry into the host cell but they are also thought to elicit an immune response. Three main glycoprotein complexes can be found on the virion envelope:

Host cells proteins; β2 microglobulin and annexin II, have been shown to associate with the CMV virion.

The DNA core contains one copy of the viral genome.

CMV has a double stranded DNA genome, encoding some 200 plus proteins. The genome is divided into two unique sequences: unique long (UL) 170 kbp and unique short (US) 35 kbp. Both are flanked at either end by inverted repeat sequences designated terminal and internal repeats. Four linear isomers of the HCMV genome are produced in equimolar amounts during infection, arising due to the inversion of the UL and US sequences (Mocarski 1993).

HCMV has 208 open reading frames (ORF’s), not all of these are expected to encode functional proteins (Chee 1991). Based on nucleotide homology with other herpesviruses 9, gene families have been identified. The exact number of genes varies according to the strain analyzed.

The replication cycle can be divided up into different stages; attachment, penetration, gene expression, DNA replication, and assembly and egress of CMV virions. Figure 2 shows a schematic representation of the events that take place during CMV replication. Virus entry into the host cell involves a multifactorial attachment cascade, using different host receptors. Once in the host cell, the de-enveloped DNA-containing capsid is transported to the cell nucleus. The capsid coat is lost, leaving the DNA to pass into the nucleus through the nucleopore. Within the nucleus, viral gene expression takes place and the DNA genome is replicated. Alternatively, viral latency may be induced. If a productive, lytic infection is generated, newly synthesized DNA genomes are packaged into preformed capsids within the nucleus.

The route of virus egress from this point has not been clearly defined and therefore could occur via different pathways. The DNA containing capsids may bud through the lamella of the nucleus losing their initial envelope when fusing with the outer nuclear membrane. Once in the cytoplasm, these immature virions traffic to the cell surface via the Golgi apparatus. Outer envelopes can either be acquired from the Golgi or from the plasma membrane as the virion buds from the cell. Alternatively, maturing virions could acquire their outer envelopes from the outer nuclear membranes and retain this envelope during their transit through the Golgi to the cell surface, exiting the host cell via cell lysis. 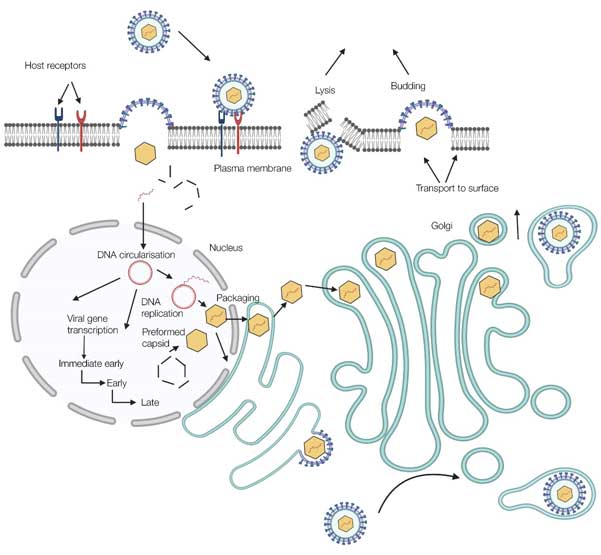 Fig. 2. The replication cycle of cytomegalovirus. Overview of CMV replication. In brief, the virus attaches and subsequently penetrates the host cell, then the viral genome is released from the capsid and enters the cell nucleus. Coordinated viral gene expression takes place resulting in viral DNA replication and virion capsid construction. Maturing virions acquire their outer lipid envelope and exit from the host cell, either by budding from the plasma membrane or by host cell lysis.

The virulence, ability to infect and cause disease, of CMV depends on both viral factors such as dose of the virus and the immune status of the host. The prevalence of CMV is partly due to its ability to infect a number of different cell types but also to persist within the host (viral latency), despite a functioning immune system. However, the immune response is critical in the control of an infection, as evident from the increase in symptoms of the immunosuppressed. A few key immune cells and cytokines have been indicated to play an important role in the containment of a CMV infection:

It is clear that CMV is able to evade the immune system long enough to yield its progeny. This immune evasion is thought to involve different mechanisms such as production of Fc receptors providing protection against antibody mediated destruction. However, the most notable mechanism is the ability to form a latent infection. The loss of immune function in those latently infected or the transplantation of latently infected tissues into the immunocompromised can lead to MCV lytic infection and disease. A detailed understanding of this latent state is required for the prevention and therapy of CMV, to this end the murine model has extensively been used. The ability of CMV to maintain a latent state and subsequently to reactivate, causing disease, continues to make treatment and vaccination problematic.