Is a Cure for HIV on the Horizon?

37.9 million people are living with HIV, according to the latest statistics from UNAIDS. While much progress has been made in understanding and treating HIV and delaying the development of AIDS, an HIV diagnosis remains a chronic condition that requires lifelong antiretroviral therapy.

A decade ago, a patient with HIV and acute myeloid leukemia was treated using a pioneering stem cell approach. Even after he stopped taking antiretroviral drugs, his viral load remained undetectable. The successful treatment of this “Berlin Patient” implied that it might be possible to cure HIV, but replicating the result in other people has not been proven possible until recently. Two other people have since been pronounced as appearing to be in remission: the “London Patient” described in a recent Nature publication (Gupta et al. 2019) and the “Düsseldorf Patient” announced in a press release from the Conference on Retroviruses and Opportunistic Infections in Seattle.

This blog discusses the CCR5 co-receptor and the role it could play in an HIV cure.

In order to replicate, HIV needs to enter cells and hijack the cellular machinery. Two receptors expressed on the outer layer of the virus are involved in this process: gp120 and gp41. The first stage requires gp120 binding to the host cell CD4 receptor, which triggers a conformational change to reveal gp41 (Figure 1). Different strains of HIV can use either the CCR5 co-receptor (R5 strains), the CXCR4 co-receptor (X4 strains), or both the CCR5 and CXCR4 co-receptors (X4R5 strains) to enter the host cell. The now exposed gp41 binds to CCR5 or CXCR4 to bring the virus into close contact with the host cell membrane and facilitate fusion. Viral RNA, and enzymes such as reverse transcriptase and integrase that are required for viral replication, are then inserted into the host cell (Figure 1). Once inside, the virus uses the cell machinery to replicate and spread (Barmania and Pepper 2013). 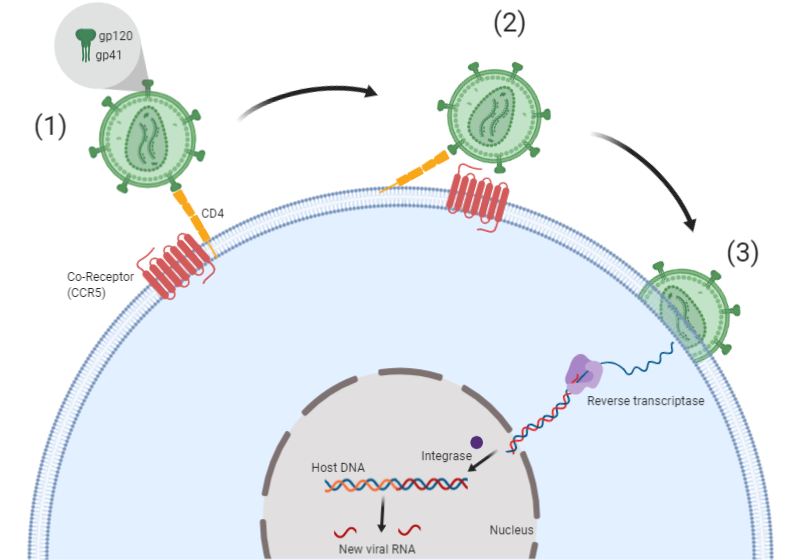 CCR5 is the most commonly used co-receptor during the initial stages of HIV infection and is highly expressed on macrophages and CD4+ T cells. However, some individuals are naturally resistant to infection by R5 HIV strains, as they possess a beneficial mutation in the gene encoding CCR5 (Barmania and Pepper 2013).

Population genomics studies have found that around 8-14% of people of European descent have a 32 base pair deletion in CCR5 (CCR5Δ32) (Solloch et al. 2017). This creates a truncated version of the CCR5 peptide that is missing the final three transmembrane domains, as well as the extracellular and intracellular loops. The truncated protein cannot translocate to the cell surface, and is instead trapped in the endoplasmic reticulum (de Silva and Stumpf 2004). Homozygous individuals (CCR5Δ32/ CCR5Δ32) are naturally resistant to R5 HIV strains, while individuals who are heterozygous benefit from slower disease progression than those without the deletion, with delayed development of AIDS by around two or three years (Solloch et al. 2017). However, they are still vulnerable to infection by X4 and X4R5 strains of the virus, as these strains don’t rely on CCR5 to replicate.

The CCR5Δ32 mutation appears to have arisen in the human genome well before the discovery of HIV and it is possible that this mutation confers a protective advantage, giving rise to a high frequency of the mutation in this population (de Silva and Stumpf 2004). It is plausible that selection pressure could have arisen from notable epidemics like the Black Death (Yersinia pestis) and small pox, however one study has suggested that it potentially arose more than 5,000 years ago, and the persistence of the mutation may be co-incidental evolution (Sabeti et al. 2005).

Due to its key role in HIV infection, CCR5 is a major target for the development of new HIV treatment strategies, including a recent controversial human CRISPR gene editing approach (Cyranoski and Ledford 2018). One particularly interesting approach is that CCR5Δ32/ CCR5Δ32 mutation may possibly open up a cure for patients with HIV who are also living with cancer.

Ten years ago, a remarkable attempt was made to cure a patient living with the R5 strain of HIV alongside acute myeloid leukemia. Dubbed the “Berlin Patient”, Timothy Ray Brown’s leukemia had proven refractory to initial cancer therapy. He needed a stem cell transplant, which would involve killing nearly all of Timothy’s immune cells and replacing them with cells from a healthy donor. The specialist treating him aimed to use stem cells from a donor who had the CCR5Δ32 mutation, conferring natural resistance to the R5 strain of HIV. If Timothy’s own immune cells were replaced with new cells that didn’t express CCR5, the mechanism that his HIV should be relied on to invade cells would be removed and he might be cured. Finding a donor who matched the required tissue profile and was homozygous for the CCR5Δ32 mutation was not easy, but eventually proved possible. After receiving aggressive radiotherapy treatment for leukaemia and a stem cell transplant, Timothy achieved remission for both conditions (Hutter et al. 2009).

Timothy Ray Brown is considered the first person to be cured of HIV; over a decade after ceasing antiretroviral therapy, he is still negative for viral load detectable in his blood. His treatment was hailed as a major scientific breakthrough. However, while several patients have successfully achieved remission at first using this approach, within a year they have relapsed, or died from cancer. In at least one case, the patient had an X4R5 strain that was able to again initiate infection once antiretroviral therapy was halted (Kordelas L et al. 2014).

The London Patient and the Düsseldorf Patient

Adam Castillejo from London, UK, is the second person in long-term remission, suggested to be cured (Gupta et al. 2020). He is more commonly referred to as the “London Patient”.

Similarly to Timothy Ray Brown, Adam Castillejo also had cancer (Hodgkin’s Lymphoma) alongside infection with an R5 strain of HIV. The specialists responsible for his cancer treatment identified a stem cell donor who was a suitable tissue match and also homozygous for CCR5Δ32, opening the possibility of replacing the patient’s immune cells with cells that are resistant to HIV infection, through a procedure that would also treat his cancer. Notably, his treatment regime was less aggressive than Timothy’s, who received chemotherapy versus whole body radiotherapy.

More than 30 months after ceasing antiretroviral treatment, viral load is still undetectable in Adam’s blood and he is in remission from cancer (Gupta et al. 2020). In the most recent case report, the authors propose that these findings represent an HIV-1 cure. The success of Adam Castillejo’s treatment opens up the feasibility of using the CCR5Δ32 mutation to prevent R5 strains replicating, and also suggests that HIV remission may be feasible when a less aggressive and less toxic approach is required for cancer treatment (Gupta et al. 2019).

In March 2019, it was reported that a third patient “The Düsseldorf Patient” was also in remission from both HIV and cancer following a bone marrow transplant as part of leukemia treatment. At the time of reporting, it was only three months since ceasing antiretroviral therapy and too early to know whether he will achieve long-term remission.

Towards a HIV Cure

These reports represent a major step forwards in our ability to cure HIV. However, it is important to note that the aggressive stem cell therapy was primarily used to treat the patients’ cancer, not their HIV. Lead researcher Prof Ravindra Kumar Gupta has emphasized that this kind of treatment would only be used as a last resort for patients who have life-threatening hematological malignancies. It is not likely to be widely offered to people living with HIV and receiving successful anti-retroviral treatment. Despite this, these successes raise the possibility that we might be able to cure more patients of their HIV in the future.

Other studies are investigating altering expression of CCR5 to develop treatments for individuals infected with R5 strains. Reducing CCR5 expression through RNA interference is being trialed and initial experiments have suggested that it is feasible to knockdown CCR5 expression by around 90% (Barmania and Pepper 2013). However, this method raises concerns about off-target effects.). Likewise, there are similar issues related to using gene-editing technology; the announcement of a radical CRISPR gene-editing approach to disable CCR5 in human embryos has been met with criticism from the scientific community (Cyranoski and Ledford 2018). It looks likely that CCR5 will remain as a promising target for developing a new HIV treatment and ultimately a cure.

The treatments that cured Timothy Ray Brown and Adam Castillejo relied on transplants of donor cells that lacked the functional CCR5 receptor. Now, some researchers are exploring whether immune cells that have been genetically manipulated to edit out the gene encoding the CCR5 receptor could be used to “cure” HIV. This approach could remove the need for a stem cell donor; instead, cells could be removed from the patient with HIV, edited, and then re-infused into the patient (Tebas et al. 2014). Another approach might combine chimeric antigen receptor (CAR) T-cells, which produce an enhanced immune response to HIV, with these CCR5-depleted T cells (Aidsmap 2020).

A Cure in Context

Research that aims to cure HIV is incredibly valuable, and will hopefully lead to more individuals living free from HIV and without the need for antiretroviral treatment in the future. It is important, however, to view curative efforts within the broader range of challenges surrounding HIV. Stigmatization of high-risk populations, lack of political commitment, and reluctance to address issues of sexuality and reproduction prevent many people from receiving an HIV diagnosis in the first place, and the opportunity to start essential antiretroviral treatment (Seyler et al. 2018). According to UNAIDS, in 2018, an estimated 21% of people living with HIV (around 8.1 million people) were unaware that they even have it.

Bio-Rad offers a range of antibodies targeted to key HIV proteins, including the CCR5 receptor.