Canine parvovirus, also called parvo (CVPC, CPV-2, CPV-2a, CPV-2b, CPV-2c), is among the top three most common infections of dogs. Caused by viral infection from external parasites, it infects the intestinal epithelium and spreads to lymphoid organs. This disease can be fatal for young dogs that have not been vaccinated or don't have maternal antibodies.

Parvo, short for canine parvovirus (CPV), is caused by canine parvovirus type 2 (CPV-2), one of the main enteric viruses affecting dogs. CPV-2 emerged in 1978 and spread out globally within two years. A series of new outbreaks followed over the years, caused by mutation of the initial type, CPV-2, to CPV-2a and then minor further changes in the capsid proteins, leading to the CPV-2b strain (Parrish et al. 1991). In 2000, a third variant (CPV-2c) was discovered (Buonavoglia et al. 2001). 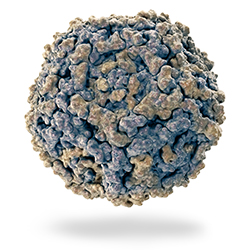 Parvoviruses are small non-enveloped viruses made up of a spherical capsid that carries a single-strand DNA chain. The approx. 5000-nucleotide long DNA molecule has two large open reading frames (ORFs) which use alternative mRNA splicing to code for overlapping genes. This makes transcription of two non-structural (NS1 and NS2) and two structural (VP1 and VP2) proteins possible. The capsid is constructed with 60 copies of a mix of VP1, VP2, and VP3 proteins. VP2 makes up around 90% of the capsid; VP3 is generated through cleavage of VP2 by host cell proteases. The structural proteins have a conserved central beta sheet formed by eight anti-parallel strands, the resulting end loops interact with other chains to form the capsid surface (Reed et al. 1988, Parrish 1999, Hoelzer et al. 2008).

CPV-2 is highly contagious with high morbidity, especially in locations like kennels. Death can occur a few days after onset of disease, young dogs are particularly susceptible between the age of 6 weeks and 6 months. If left untreated mortality is very high, however with treatment survival rates can be up to 90%. All breeds can be infected, but mixed breeds are more resistant, while pure bred rottweilers, doberman pinschers, English springer spaniels, American pit bull terriers, and German shepherds are at increased risk for infection (Houston et al. 1996, Parrish et al. 1995).

Infection is via the oral route with CPV-2 replicating in tissues with high cell turnover, such as the intestinal epithelium, bone marrow, and lymphoid tissues. One key cellular symptom is lymphocytopenia. Later, the virus accumulates in the gut-associated lymphoid tissues before it is shed via the intestines. This is the enteric form of parvo characterized by vomiting, hemorrhagic diarrhea, fever, and dehydration. For a while a second form existed in pups which led to myocarditis and death; this is no longer seen, as vaccination and immunity in older animal protects the newly born dogs (Greene and Decaro 2011).

This makes CPV an interesting virus to study from an evolutionary and receptor specificity angle. Bio-Rad, the leading supplier of veterinary research antibodies, supplies reagents reactive to canine parvovirus. Two of them, clones 7351 and 7341, are Mouse Anti-Canine Parvovirus Antibodies suitable for ELISA. The third, clone PV1-2A1, will detect canine parvovirus and feline panleucopenia virus in ELISA and immunohistology on paraffin imbedded tissue samples.