SUMOylation: a Heavyweight in the Regulation of Cell Cycle Progression and Cell Proliferation – Part Two

In the second part of our series on SUMOylation, we examine how key cell signaling proteins are regulated by SUMOylation, the effect of their aberrant SUMOylation on signaling pathways and the potential of SUMO inhibitors in cancer therapy.

To date, around 3,600 SUMOylated proteins have been identified, which include a large variety of tumor suppressors, (proto)-oncogenes, transcription factors and DNA damage and repair proteins (Hendriks and Vertegaal 2016, Cremona et al. 2012). Aberrant SUMOylation of these proteins can result in cell cycle and cell proliferation defects, and ultimately cancer development (Eifler and Vertegall 2015). The examples below of SUMOylated signaling proteins provide an overview of the impact of this modification and how misregulation can trigger cancer. 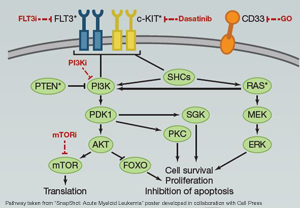 The phosphatase PTEN is a tumor suppressor, which blocks activation of the PI3K-AKT pathway by dephosphorylating PIP3 (Phosphatidylinositol (3,4,5)-trisphosphate) at the plasma membrane (Song at al. 2012). The gene is one of the most frequently mutated and deleted genes in human cancers (Leslie and Longy 2016) including melanoma, and Acute Myeloid Leukemia. Loss of PTEN function has been reported to promote both cell proliferation and survival (Leslie and Longy 2016). SUMOylation of PTEN is essential for its association with the plasma membrane. Aberrant SUMOylation results in increased PIP3 levels and therefore activation of the PI3K-AKT pathway, as well as increased cell proliferation (Huang et al. 2012).

The serine/threonine protein kinase AKT1 is a key regulator of cell proliferation and apoptosis. Li et al. (2013) showed that AKT SUMOylation results in activation of the kinase domain and promotes tumorigenesis. By systematically point-mutating lysine residues (K) the authors identified K267 as the major SUMOylation site. They showed that mutating K267 to arginine or alanine eliminated the AKT kinase activity, and reduced cell migration as well as cell proliferation (Li et al. 2013).

The forkhead box protein M1, FOXM1 transcription factor, is a “master regulator” of cell cycle gene expression and has a critical role in the G1 to S and G2 to M cell cycle phase transitions (Yang et al. 2013). In addition to this critical role, FOXM1 regulates expression of DNA damage and repair genes, which contribute to the maintenance of genome integrity (Zona et al. 2014). This feature has contributed to the oncogene classification of FOXM1 and has generated interest in the protein as a cancer biomarker (Nandi et al. 2017). Although there is consensus in the literature of FOXM1 SUMOylation , different SUMO isoform conjugations and opposing functional effects of these SUMOylation events have been reported.

Schimmel et al. (2014) showed evidence of FOXM1 SUMO-2 conjugation, which increased the activity of the transcription factor by blocking its dimerization and thereby lifting its autorepression. On the other hand, Myatt et al. (2014) found evidence of FOXM-1 SUMO-1 conjugation, which they reported to result in reduced transcription factor activity.

SUMOylation is important for transcriptional regulation of oncogene expression, cell cycle progression and cell proliferation. This makes the SUMO pathway, like the ubiquitin pathway, an attractive target for cancer therapy. SUMOylation has also been associated with maintaining genome integrity and key components of the SUMO conjugation machinery, such as Ubc-9, have been shown to be overexpressed in ovarian, prostate and colon cancers (Eifler and Vertegall 2015). This further increases the attractiveness of SUMO components as cancer drug targets.

Progress has recently been made in applying SUMOylation inhibitors for clinical purposes; Bernstock et al. (2017) recently demonstrated the potential use of the global SUMOylation inhibitor Topotecan as an adjuvant therapy for certain types of glioblastoma multiforme (GBM). This study only provides a preview of the potential of SUMO inhibitors as therapeutic agents but highlights their potential for treating cancer.

To assist with your cell signaling research we offer many products including a comprehensive range of anti-EGFR antibodies and resources, such as protocols, webinars, tips and tricks, for key cancer applications, such as immunohistochemistry, immunoprecipitation and western blotting.