When ubiquitination goes bad, knock it out for effective cancer therapy

In 1975, Goldstein et al. identified a small protein of 76 amino acids called ubiquitin. The importance of this molecule was not immediately obvious; however its ubiquitous nature (hence the name ubiquitin) was later discovered, as it can be found in every living cell of several organisms. It is highly conserved across all eukaryotes, and in fact, human and yeast ubiquitin share around 96% sequence identity. The important role of ubiquitin in basic cellular processes is exemplified by award of the 2004 Nobel Prize in Chemistry (Nobel Media AB 2014) for ubiquitin research. In the past two decades, our understanding of ubiquitin molecules has evolved tremendously. Particularly, increased knowledge of their role in protein modification and cancer has led to the development of several targeted therapeutics, some of which are currently in clinical trials (Diehl et al. 2010).

Because the ubiquitin system and the proteasome are involved in cell growth, cell death and DNA damage repair, cancer cells like viruses often hijack the ubiquitination process to mediate survival through evasion of apoptosis, a key hallmark of cancer (Hanahan and Weinberg 2011). Consequently, several ubiquitination related proteins are overexpressed in cancers such as melanoma and multiple myeloma (Bielskienė et al. 2015, Diehl et al. 2010). The ubiquitin proteasome system is also dysregulated in cancers to induce the degradation of cell cycle regulators such as p27 and p53. Therefore, inhibition of the ubiquitination process by targeting key ubiquitin related proteins is a prime strategy for cancer therapy.

E3 ligases as a therapeutic target

Of all the ubiquitination molecules, E3 ligases are the most common therapeutic target. This is primarily because they are the most specific enzymes of the ubiquitination system, and participate in cancer development (Bielskienė et al. 2015).  E3 ligases are classified into the RING (really interesting new gene), HECT (homologous to E6-associated protein carboxyl terminus) and U-box classes based on their structure. The main difference between these classes of E3s relates to the mechanism used to transfer ubiquitin to the protein substrate; RING and U-box E3s transfer ubiquitin by an allosteric mechanism whereas HECT E3s form a bond with ubiquitin before linkage to the substrate.

MDM2 (HDM2) is a RING E3 ubiquitin ligase that regulates the levels of the tumor suppressor p53. It is overexpressed in many cancers and consequently facilitates the proteasomal degradation of p53 or its inactivation. Several inhibitors have been developed to disrupt the interaction of MDM2 with p53 or block Mdm2 expression. Approximately 10 MDM2 targeted small molecule drugs have been investigated for treatment of a variety of cancers including neuroblastoma, retinoblastoma, leukemia and melanoma (Bielskienė et al. 2015; Shen et al. 2013).

The E3 ligase complex SCFSkp2 is also overexpressed in cancer and is associated with loss of tumor differentiation (Shen et al. 2013). The SCFSkp2 complex mediates the degradation of p27Kip1, thus its overexpression in cancer helps to facilitate uncontrolled growth. This makes the SCFSkp2 complex and its components, which include cullin 1, Skp1/2 and Rbx1/Roc1, attractive targets for cancer therapy. An inhibitor drug called compound A that inhibits p27Kip1 ubiquitination by targeting Skp1/2 has demonstrated efficacy in pre-clinical studies of multiple myeloma (Shen et al. 2013).

E3 ligases can also be mutated in cancer, as is the case with c-Cbl, a RING E3 ligase that has been shown to be mutated in acute myeloid leukemia and non-small cell lung cancer (NCSLC) (Katzav and Schmitz 2015). c-Cbl mediates monoubiquitination and consequently endocytosis and degradation of key receptor tyrosine kinases such as epidermal growth factor receptor (EGFR). Pre-clinical studies show that overexpression of wild type c-Cbl leads to tumor inhibition. Therefore, c-Cbl is considered a promising therapeutic target for cancer therapy (Fang-Yi Lo et al. 2011).

Recently, researchers at the University of Birmingham demonstrated that the tumor suppressor protein  BRCA1 functions as a RING E3 ubiquitin ligase (Densham et al. 2016). Mutations in the BRCA1 gene or loss of its expression are commonly associated with a high risk of developing breast and ovarian cancer. The researchers show that the ubiquitin ligating activity of BRCA1 results in effective DNA repair, such that mutational inactivation of this activity leads to cancer development. In this instance, rather than inhibiting ubiquitin ligase activity, a therapeutic strategy in BRCA1 associated cancers would be to induce its ubiquitin ligase activity, thus initiating DNA repair.

DUBs are also being targeted for cancer therapy (D'Arcy et al. 2015). A significant number of DUBs have demonstrated intrinsic oncogenic potential and have been linked to the development of chemoresistance (Hussain et al. 2010, Fraile et al. 2012). Some DUBs currently being targeted include USP30, which is known to restrict apoptosis (Liang et al. 2015); USP7, which inhibits the function of the tumor suppressor PTEN (Song et al. 2008) and PGP9.5 (UCHL1), which is differentially expressed in cancers and is associated with poor prognosis (The human protein atlas, Tezel et al. 2000).

Ubiquitin, once thought to be an inconsequential protein, has taken center stage in cell biology due to its leading role in regulating numerous signaling pathways such as the NF-κB pathway. As a result, the enzymes involved in the process of ubiquitination, particularly E3 ligases, have become popular by association and are molecular targets for cancer therapy. Additionally, because E3 ligases are also overexpressed or mutated in cancer, they simultaneously serve as prognostic biomarkers (Bielskienė K et al 2015).

Most of the small molecule inhibitor drugs that target these E3 ligases show efficacy in pre-clinical studies. In addition, because of their targeted nature, they are likely to be less toxic than chemotherapy. More research will be required to determine whether some of these ubiquitin molecule targeted therapies can be combined to improve cancer treatment.

A summary of the “druggable” ubiquitination molecules discussed can be found in the table below. 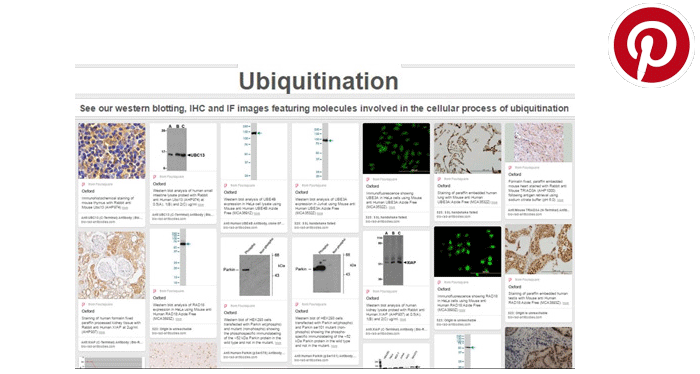 Hussain S et al. (2010). The de-ubiquitinase UCH-L1 is an oncogene that drives the development of lymphoma in vivo by deregulating PHLPP1 and Akt signaling. Leukemia 24, 1641-1655.