SUMOylation: a Heavyweight in the Regulation of Cell Cycle Progression and Cell Proliferation – Part One

Check out our podcast on SUMOylation, including our tips to help you study this post translational modification. Spend your experimental break wisely and get some science on the go in less than 5 minutes.

In the first part of our two-part series on SUMOylation we discuss the discovery of SUMO and the importance of SUMOylation in cell cycle regulation. 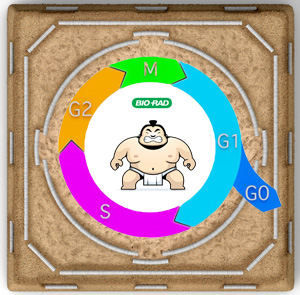 Currently five SUMO proteins have been identified; these are SUMO-1, SUMO-2, SUMO-3, SUMO-4 and SUMO-5 (Coelho-Silva et al. 2017). Conjugation of these SUMO proteins to lysine (K) residues present on protein substrates results in various functional changes. For example, SUMOylation has been reported to alter the subcellular localization and protein interactions of its substrates (Gareau and Lima 2010).

SUMOylation is a rapid and reversible modification and has a well-documented role in transcriptional regulation. SUMOylation is therefore an effective response tool to environmental and cellular stresses, such as DNA damage (Hendriks and Vertegaal 2015). Moreover, SUMO has been linked with cell cycle progression right from its initial discovery.

From Yeast to Mammals – Importance of SUMOylation in Cell Cycle Regulation

The budding yeast, Saccharomyces cerevisiae, has been a popular model organism for over 50 years (Burgess and Powers 2017). Discoveries made in yeast have majorly advanced cell biology research and have significantly contributed to our current understanding of the eukaryotic cell cycle. It is perhaps not surprising that the first SUMO homolog, SMT3, was discovered in S. cerevisiae. SMT3 was initially identified in a genetic suppressor screen of mutations in the MIF2 gene, which encodes a centromere protein essential for cell cycle progression (homolog of the mammalian CENP-C protein) (Gardner et al. 2001, Meluh and Koshland 1995).

The experiment in which SMT3 was identified implied a role for the protein in cell cycle progression and regulation. This theory gained traction when the S. cerevisiae SUMO-conjugating enzyme, Ubc9, was reported by Seufert et al. (1995) to play a role in the “degradation of S- and M-phase cyclins "and the progression through mitosis. Further evidence came from Li and Hochstrasser (1999), who showed that the ubiquitin like specific protease, ULP1, was essential for the G2 to M phase transition of the cell cycle.

It was not long after these initial experiments in yeast that SUMOylated proteins were discovered in mammals. The first one to be identified was the Ran GTPase-activating protein 1, RanGAP1 (Matunis et al. 1996). Western blotting and imaging experiments showed that unmodified 70 kDa RanGAP1 was exclusively localized in the cytoplasm, while the modified 90 kDa variant co-localized to the “cytoplasmic fibers of the nuclear pore complex” (Matunis et al. 1996). The moiety conjugated to RanGAP1 was subsequently named SUMO-1 by Frauke Melchior’s group (Mahajan et al. 1997) and shown to be critical for localizing RanGAP1 to mitotic spindles and kinetochores (Joseph et al. 2002).

Further evidence for the essential role of SUMOylation in mammals came from a study conducted by Nacerddine et al. (2005), which showed that Ubc-9 deficient mice ”die at the postimplantation stage”. Although cultured Ubc-9 deficient blastocytes were viable, these cells showed severe mitotic defects, such as impaired chromosome segregation (Nacerddine et al. 2005). Furthermore, Ubc-9 deficient cells showed a RanGAP1 distribution defect as the protein no longer localized at the nuclear pore complex (Nacerddine et al. 2005). Thus, confirming the earlier result by Mahajan et al. (1997) that SUMOylation is required for localization of RanGAP1 to this region.

Over the next decade, the importance of SUMOylation in orchestrating cell cycle progression has been continuously demonstrated and many key mediators have been subsequently shown to be regulated through this modification. In our next blog post we discuss how SUMOylation regulates key cell signaling proteins and how their aberrant signaling can lead to the development of cancer.

Tips and Tricks for Studying SUMOylation