If you have ever been burned, you probably noticed that your hand was pulled back even before you could yelp, “Ouch!”

How could your hand have possibly moved before you even felt pain? In your body, sensory neurons rapidly detected the injury and sent electrochemical signals that raced at over 200 miles per hour to remove your hand from the heat before you suffered serious skin damage. This fast reaction would not be possible without myelin, the surrounding sheath of these neurons, which helps direct the signals quickly throughout the body to perform their intended function. In this guest blog, we dive into the structure and function of myelin and the consequences of myelin-associated diseases.

The nervous system functions similarly to wires running throughout a home. Electrical wires need to be insulated with rubber to stop electricity from accidentally crossing to other wires in buildings. For nerves, myelin acts as the protective insulator throughout most of the body. Despite the seemingly simple function of myelin, it is actually a complex and dynamic substance. About 80% of myelin is comprised of lipids, such as cholesterols, phospholipids, and glycolipids which help provide the electrical resistance of myelin (Poitelon et al. 2020). The remaining 20% is made up of proteins like myelin basic protein, myelin oligodendrocyte glycoprotein, and proteolipid protein that help organize and support the overall structure (Poitelon et al. 2020). Myelin also contains water, a poor electrical conductor, that provides additional insulating properties. The composition of myelin has been described to change throughout life and is thought to help fine-tune the function and connectivity of neurons and promote their overall health (Saab and Nave 2017).

Myelin is produced by two types of glial cells in the body depending on the location of the nerves (Figure 1). Peripheral nervous system myelin is made by Schwann cells. One Schwann cell can only myelinate a single portion of a peripheral nerve, wrapping itself in a spiral around the axon and creating multiple layers of myelin. In the central nervous system, nerves are myelinated by oligodendrocytes. These octopus-shaped cells have multiple arm-like projections that can wrap around and myelinate up to 50 axonal segments (Baumann and Pham-Dinh 2001). The myelinated nerves of the subcortical regions of the brain have a distinct white color and are commonly called white matter. Unmyelinated brain regions, such as the cortex, are known as grey matter. 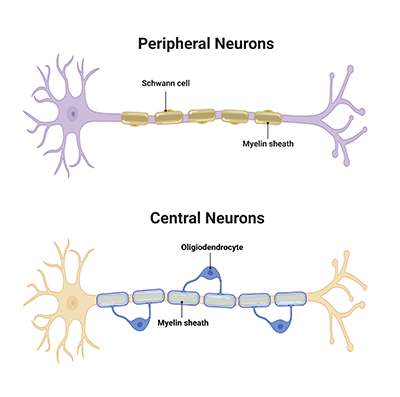 Although it may appear that myelin should continuously surround nerves, myelin is organized into distinct segments, leaving small, 1 μm gaps that are not insulated (Arancibia-Carcamo et al. 2017). These unmyelinated regions are the cause of the exceptionally fast speed of neurons and are called the Nodes of Ranvier. They are where voltage-gated sodium channels can exchange ions. Through the influx of the positively charged sodium ions, action potentials can form at regular intervals at the Nodes of Ranvier, rather than the neuron creating a single action potential which could degrade as it moves along the axon. Due to the way that the action potential appears to jump along the axon, this type of signaling is called saltatory conduction, from the Latin word “to leap or dance” (Figure 2). Without Nodes of Ranvier and saltatory conduction, the only way to increase signal speed is to increase the axons' diameter, which is only biologically feasible up to a certain size. Furthermore, the myelin sheath helps conserve energy by reducing the number of ions that need to be pumped back out of the axons to bring them back to the resting potential and allow for more action potentials (Arancibia-Carcamo et al. 2017).

Fig 2. Saltatory conduction. Depolarization of the axon at the Nodes of Ranvier is caused by the opening of voltage gated sodium channels that allow the influx of positively charged sodium ions. The positive charge is pushed to the next Node of Ranvier and a new action potential is formed that continuously renews the signal as it moves down the axon.

Myelin-associated diseases affect millions of people globally and can be caused by genetic or environmental factors. Although there are numerous myelin diseases, they are generally separated into two major groups. Demyelinating diseases occur when the immune system or other factors break down otherwise healthy myelin. In contrast, dysmyelinating diseases are caused when the produced myelin is abnormal, leading to its degradation.

One of the most common demyelinating diseases is multiple sclerosis (MS). In this autoimmune disease, antibodies are produced that bind to myelin, causing immune cells to infiltrate and attack the protective coating (Dobson et al. 2018). Ultimately, this causes characteristic inflammatory plaques that lead to the degeneration of neuronal axons and loss of oligodendrocytes, impacting motor function and vision. It can also cause changes in cognition and behavior. MS can manifest in three forms, the most common of which is relapsing-remitting MS (RRMS). In RRMS, individuals go through cycles of demyelinating attacks followed by remyelination every few months. Similarly, secondary progressive MS (SPMS) starts with a few years of relapses and remissions, but the demyelination steadily progresses. In primary progressive MS (PPMS) there is no period of demyelination or remission and symptoms only worsen over time. Since the 1980s, multiple immune-modifying treatments are available for RRMS, but currently only one drug, ocrelizumab, is approved for progressive forms of MS.

Vitamin B12 deficiency is an example of dysmyelination. Vitamin B12 is required to produce the cofactors needed to stabilize myelin structure. However, B vitamins are not naturally produced by the body and must be supplemented in the diet through foods like dairy and meat. Vitamin B12 deficiency is often found in individuals with diets that lack these foods, although it can occur in people with digestive issues or other diseases of the gastrointestinal tract (Green et al. 2017). Symptoms include fatigue, due to anemia, and a numbness or prickling sensation in the hands or feet due to myelin degradation. However, these symptoms usually take years to manifest, and fortunately, once diagnosed the deficiency is easily treated with vitamin B12 supplements. However, some individuals can have lasting nerve damage if treatment is delayed after the onset of symptoms.

Myelin is a key component of the neurons, accelerating orderly communication between sensory systems, central nervous system neurons, and motor organs. While our understanding of myelin has increased in the past few decades, there is still much to discover. As the prevalence of myelin diseases grows worldwide, investigation into the structural biology of myelin is necessary, in addition to the development of more therapeutic treatments, and diagnostic tests for affected individuals. By furthering our understanding of myelin, in the future, there may be new ways to restore damaged myelin sheath or to prevent damage from occurring.

Bio-Rad offers a number of antibodies to myelin basic protein (MBP), a key component of the myelin sheath.

This blog was awarded 2nd place in the 2021 Bio-Rad Science Writing Competition. ...