How to Use Flow Cytometry to Measure Apoptosis: Part One

Flow cytometry is a powerful tool for measuring apoptosis. Unlike techniques like western blotting, it provides an efficient way to characterize lots of cells individually rather than studying a mixed population. Flow cytometry is also able to analyze many more cells than confocal microscopy in less time, although without the level of detail observed by microscopy. It also allows the detection of apoptosis in cellular sub-populations by combining apoptosis detection reagents in multiplex panels. This means no pre-sorting of your cell of interest is required, and the user can combine assays and study multiple targets simultaneously.

Cell death by apoptosis is a dynamic process during which a cell transitions through a series of defined steps in a number of hours. Apoptosis can happen through the extrinsic pathway, whereby environmental conditions signal to the cell that it must die. In contrast, the intrinsic apoptotic pathway happens when damage inside the cell triggers cell death. When studying apoptosis, it can be important to consider which pathway is induced. Bio-Rad offers reagents for studying both pathways.

Many products used for studying apoptosis will detect a protein that is activated for some time during the process, but the protein may exist in basal state during other steps of apoptosis. If your aim is to see whether cells are apoptotic, it is important to use a tool appropriate to the current stage of apoptosis, as not all markers are present in all phases (induction, early phase, mid phase, and late phase). For example, if you want to observe the collapse of mitochondrial membrane potential, you should ensure that your cells haven’t passed that step at the time of analysis.

This blog is the first of a two-part series covering the study of apoptosis by flow cytometry and is designed to help you select the correct tools for your apoptosis experiments. Part Two covers helpful tips to ensure you get the most out of your selected products and protocols.

Annexins are calcium-regulated proteins that play important roles in apoptosis (Mirsaeidi et al. 2016). Each member of the annexin family binds to specific membrane proteins which are disrupted during apoptosis when the plasma membrane is rearranged. One rearrangement causes phosphatidylserine (PS) to be displayed at the outer membrane. Annexin V binds PS in the presence of calcium and is, therefore, a useful tool for detecting early apoptosis.

Fig. 1. Annexin V and PI staining in cells treated with the apoptosis-inducer staurosporine. Jurkat cells were treated with 1 µM staurosporine or DMSO (vehicle control) for 6 hr. They were stained using AnnexinV-PE (ANNEX200PE) and PI.

Death receptors are members of the tumor necrosis factor receptor (TNF-R) superfamily. They are characterized by a cytoplasmic “death domain” with the ability to initiate apoptosis via caspase-8 in response to external death signals (Guicciardi et al. 2013). 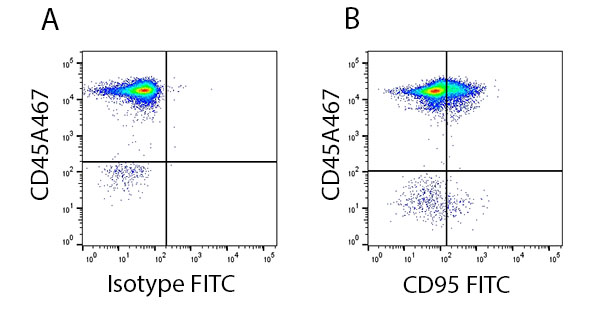 Collapse of mitochondrial membrane potential is identified by a change in subcellular location and/or fluorescence of the dyes. This can be detected using flow cytometry using three fluorescent dyes: JC-1 (Figure 3A), TMRE (Figure 3B), and TMRM.

These dyes are able to enter healthy mitochondria where they aggregate and brightly fluoresce. As apoptosis occurs, the mitochondrial membrane potential collapses and the dyes disperse throughout the cell. If stained using TMRE or TMRM, this will result in diminished fluorescence. If JC-1 is used, collapse of mitochondrial membrane potential will be identified by a change in fluorescence color from red (non-apoptotic) to green (apoptotic). 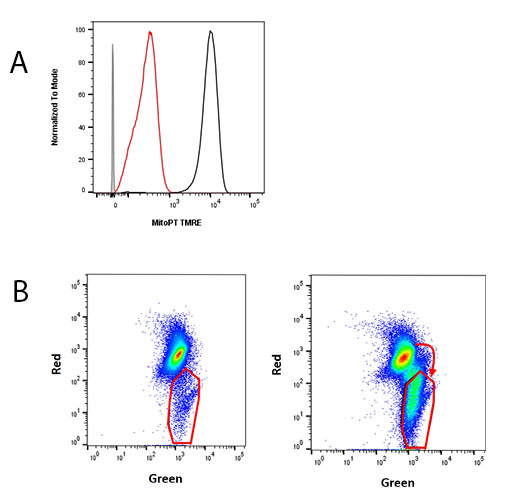 Caspases are cysteine proteases that cleave other proteins and initiate positive feedback cascades leading to apoptosis. Different caspases become activated at different stages of apoptosis, and can serve as indicators of steps within apoptosis (Shalini et al. 2015). Antibodies against activated forms of specific caspases can, therefore, be used for studying apoptosis by flow cytometry, and are conveniently available as kits to help you study apoptosis (Figure 4). Care must be taken to ensure that caspase antibodies are used on cells at the stage of apoptosis where that caspase will be activated, rather than earlier or later. However, Polycaspase Kits recognize multiple caspases and can determine whether any caspase has been activated before a researcher chooses to look at individual caspases. 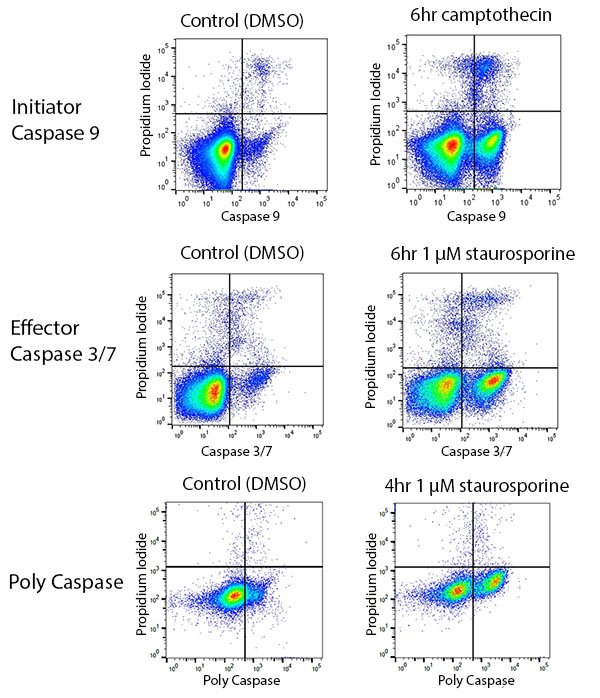 Nuclear DNA is cleaved during apoptosis. This process can be detected using flow cytometry by applying a DNA dye to cells and plotting DNA content on a histogram representing the mass of DNA in each cell, and, therefore, the cell cycle stage. Apoptotic cells will contain less stained DNA than cells in the G1 phase of the cell cycle and will appear to the left of the G1 peak in a DNA histogram (Figure 5) (Plesca et al. 2010). Various dyes can be used for sub-G1 assays including trypan blue and Hoechst 33342. 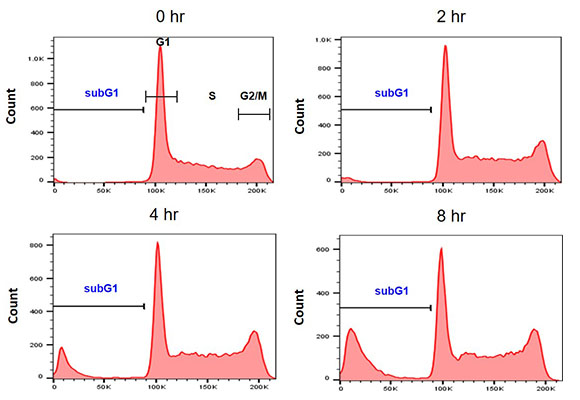 Fig 5. Example sub-G1 assay. Jurkat cells were treated with 1 µM staurosporine for 0–8 hr. Nuclei were stained with PI  (1351101) in a hypotonic solution.

The use of flow cytometry for detection of apoptosis is supported by a wide range of products that are compatible with the technique. Whether you are studying death receptor activation or the collapse of mitochondrial membrane potential, there should be a product suitable for your needs. However, it is critical to take into account that apoptosis is dynamic and cells should be studied at an appropriate timepoint for detection of your process of interest.

Products to Help You Study Apoptosis

Discover quick and easy methods to study apoptosis by flow cytometry with Apoptosis Kits from Bio-Rad. Available for a range of targets, and in different pack sizes to suit your needs.